The Lloyd Library and Museum was initially established from the personal collections of John, Nelson, and Curtis Lloyd. The Lloyd brothers were Cincinnati pharmacists during the late 19th century. Their company Lloyd Brothers Pharmacists specialized in the manufacture of botanical drugs. The Library has a focus on medicinal plants, botany, and pharmacy. 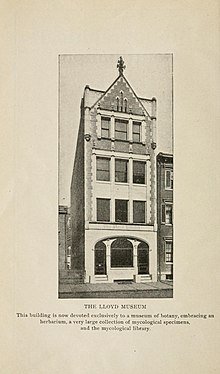 Lloyd Library and Museum circa 2011 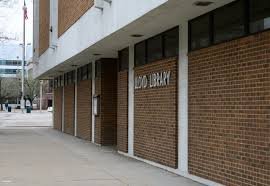 The Lloyd Library and Museum began as an assortment of research materials collected by brothers John Uri Lloyd (1849-1936), Curtis Gates Lloyd (1559-1926) and Nelson Ashley Lloyd (1851-1925). The Lloyd brothers, raised in Boone County, Kentucky were apprenticed to pharmacists in Cincinnati when they turned 14 years old. All became licensed pharmacists, starting at H. M Merrill and Company. In 1885, the three formed their own company called Lloyd Brothers Pharmacists Inc. John was the scientist, becoming a well-known plant pharmacist and president of the American Pharmaceutical Association. Nelson handled the business, and Curtis pursued new volumes to build their library.

The Lloyd brothers believed in Eclectic medicine which relied on botanical remedies, sustaining life forces, and supporting a balance of function.1 John served on the faculty of the Eclectic Medical Institute in Cincinnati and Curtis collected and donated medicinal plants for a herbarium at the school.2 The Eclectics were often scorned by mainstream medical practitioners who still relied on bloodletting and mercury treatments. John Lloyd was steadfast in his belief in the rationality of eclectic medicine: “No man can to us say, ‘I am authority,’ and by that self-sufficient assertion deny other the right to individual thought. This privilege I hold as a pharmacist. The pharmacist of the future, this speaker believes, will stand above our heads, he will see clearly what we have never seen, grasping things we have never touched.”3

By 1902, the brother’s book collection was too large to remain housed between the pharmacy plant and Curtis’s home so they purchased a building at 224 West Court Street in downtown Cincinnati for a proper library. A few years later they tore it down and constructed a four-story building that could hold both the books and Curtis’s botanical and mycological specimen collection. Curtis spent his life adding to the collection building a world-class library of approximately 50,000 volumes. He established a trust so the collection would be continue after his death in 1917. In 1970, a new library and museum was constructed at 917 Plum Street, next door to original structure. A parking lot has now replaced the West Court Street location. The 30,000 square foot Plum Street location holds 150,000 volumes, 3,00 linear feet of archives, and 3,00 artifacts.4

The Lloyd Library and Museum is open to the public and free of charge. Researchers are encouraged to make an appointment. According the website “The collection contains rare books, manuscripts, photographs, medicinal products, original art, and artifacts dating from 1493 to present.”