Designed by lauded architect Richard Upjohn, and built during the first few years of the U.S. Civil War for Dr. and Mrs. Marshall Woods, the Woods–Gerry House is the largest surviving 19th-century house in Providence. At its base, the house measures 55 feet by 75 feet and stands three stories high. Typical of many of Upjohn's designs, the home features restrained Italianate styling. The building currently houses the Admissions office for the Rhode Island School of Design on its upper levels and serves as an art gallery for undergraduates on the first floor.

Side View of Woods-Gerry House in Providence, Rhode Island (Built 1860) 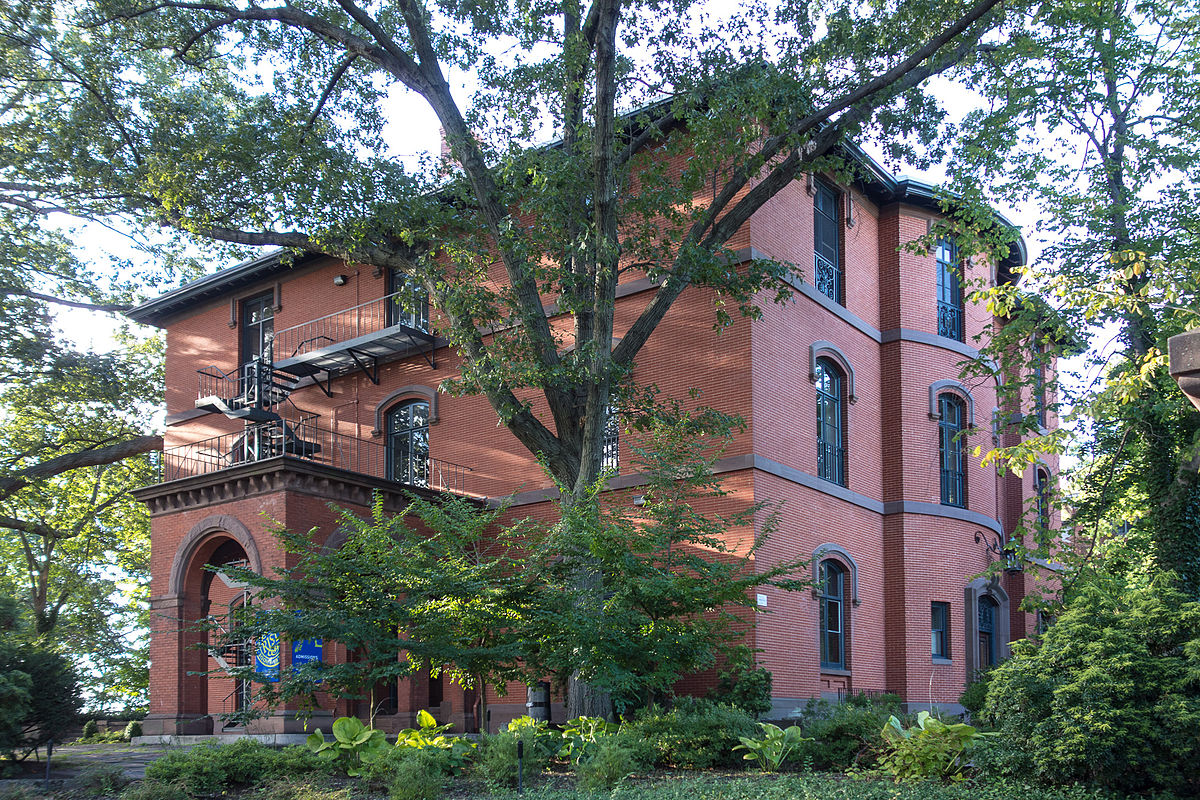 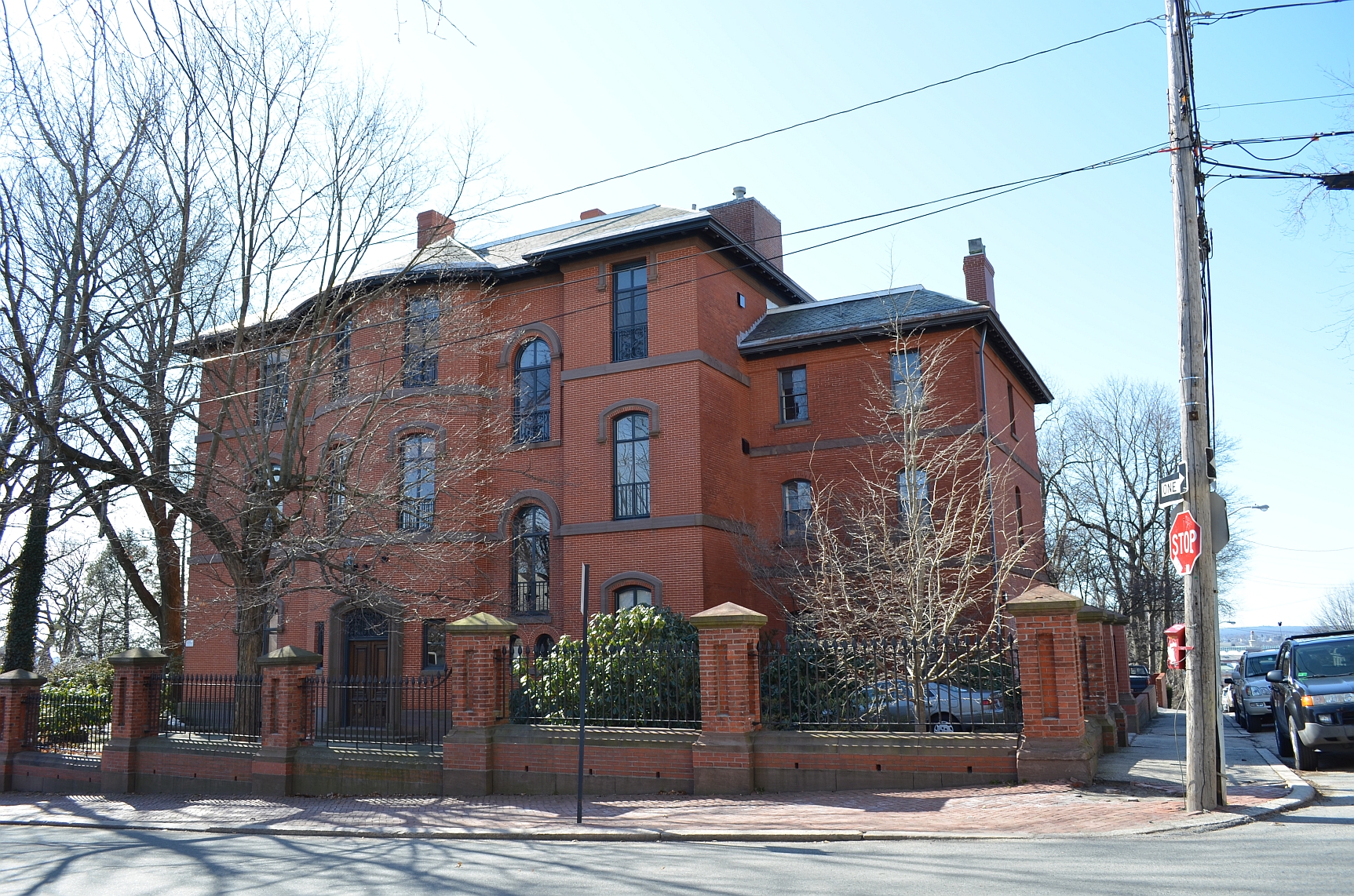 The Woods-Gerry house, built during the U.S. Civil War from 1860-1863, was designed by the renowned New York architect Richard Upjohn for Dr. and Mrs. Marshall Woods. It is the largest remaining nineteenth-century house in Providence, spanning 55 feet by 75 feet at its base and three stories high. The home enjoys an Italian Renaissance design with an external style of brick with wood, sandstone trim, and a slate roof.
About Richard Upjohn

Richard Upjohn (1802 - 1878), born in Shaftesbury, Dorset, England, moved to the United States at the age of 27 with his wife and son. He began his career as a skilled cabinetmaker and carpenter in New Bedford, Massachusetts before transitioning three years later to architecture. Upjohn moved to New York in 1839 where he was asked to design a new Trinity Church (1839 -1846). His success in that endeavor afforded him the opportunity to work on several other grand churches, as well as a multitude of other public, private and commercial buildings. As a result of his success, he and a dozen of his peers successfully organized the American Institute of Architects in 1857, with Upjohn as its first president.
The Woods-Gerry house is one of four significant commissions performed by Upjohn in Providence, with the other three comprised of another house and two churches. However, only the Wood-Gerry house remains.
About Dr. Marshall Woods
Marshall Woods graduated from Brown University in 1845, the same institution for which his father served as a professor of natural philosophy and mathematics as well as interim president, trustee, and fellow. Woods went on to earn a medical degree from the University of New York, although he did not pursue a career in medicine; he worked as an investor and worked as the director of the Providence National Bank.
Among many of Woods' accomplishments, Woods served as a the 1855 Paris Exposition commissioner and Brown University treasurer from 1866 -1882. It seems fitting that his home now functions as an art gallery for the Rhode Island School of Design because Woods, in 1892, donated $3,000 to establish a "Lectureship on the Fine Arts, and on their Application to the Mechanic Arts, or Industrial Pursuits." Based on this initiative, the Marshall Woods lectures started in 1909.
Woods also married into another prominent Rhode Island family. He married Anne Brown Francis (1828-1896), daughter of Governor John Brown Francis and Anne Carter Brown. Furthermore, Brown University owes its name to Anne's maternal grandfather, Nicholas Brown

The House: From Woods in 1860 to the Rhode Island School of Design Today

The Wood family lived in the house until 1931 when Mr. and Mrs. Peter Goelet Gerry purchased the residence. In 1959, the Rhode Island School of Design (RISD) bought the house with the intention of demolishing it -- though that plan obviously never came to fruition. Indeed, by 1970 the RISD headed a plan to renovate (and rehabilitate) the house. Today, the first floor of the Woods-Gerry house serves as RISD’s primary gallery for displaying work performed by its undergraduate students, while the upper levels function as the university's admissions office.