Site of martyrdom/murder of LDS founder Joseph Smith and brother Hyrum on June 27, 1844

Statue of Joseph and Hyrum Smith located in front of jail.

Built in 1839 the two story building housed petty thieves and debtors and temporarily held violent criminals being transported. Besides a cell in the second floor and debtor's room found in the first floor, the jail also had a kitchen, dining room and bedrooms for the guards.

In 1844, the jail was used to hold LDS founder and prophet Joseph Smith, his brother Hyrum and two apostles of the Church: John Taylor and Willard Richards. They were ordered by the Governor of Illinois to go to the jail in Carthage to await trail. The men were being charged for treason and disturbing the peace. The charges were later discovered to be bogus; designed by a mob from Missouri, the state that issued the infamous 'extermination order' against the Mormons.

June 27, 1844, while preparing for court, a mob of about 150 men surrounded and stormed the jail. The 'prisoners' were located on the second floor. Hyrum was killed first, followed by Joseph, whose body fell out of window and landed near the well serving the jail. John Taylor was severely wounded but survived. Willard Richards only received a nick on his ear. 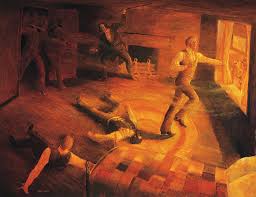 The mob would flee when it was reported that a group of Mormons were coming to rescue the four men. The latter would retrieve the bodies and return them to the nearby city of Nauvoo, built by the Church.

Rather then killing off the Church with Joseph's death, as the mob had hoped would happen. An apostle Brighman Young would succeed Joseph as prophet and lead the Church members to modern day Salt Lake City, UT, starting in 1846.

Joseph Smith and Hyrum are buried in Nauvoo. Visitors can visit the town of Nauvoo as well as Carthage.