This statue was a monument to Stephen Foster, a very well-known American music composer. Stephen Foster is known as "the father of American music". Many of his most famous compositions are songs many Americans still play to this day. The statue was sculpted by artist Giuseppe Moretti in 1900. That statue has been recently removed due to its racial controversy.

Statue of Stephen Foster and African American playing banjo below him 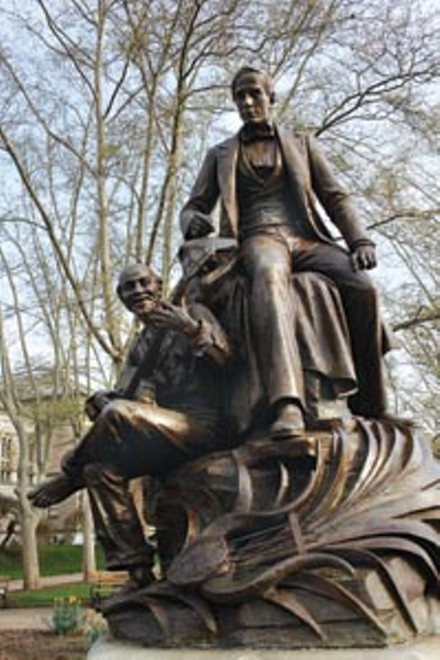 Removal of the statue by Pittsburgh workers 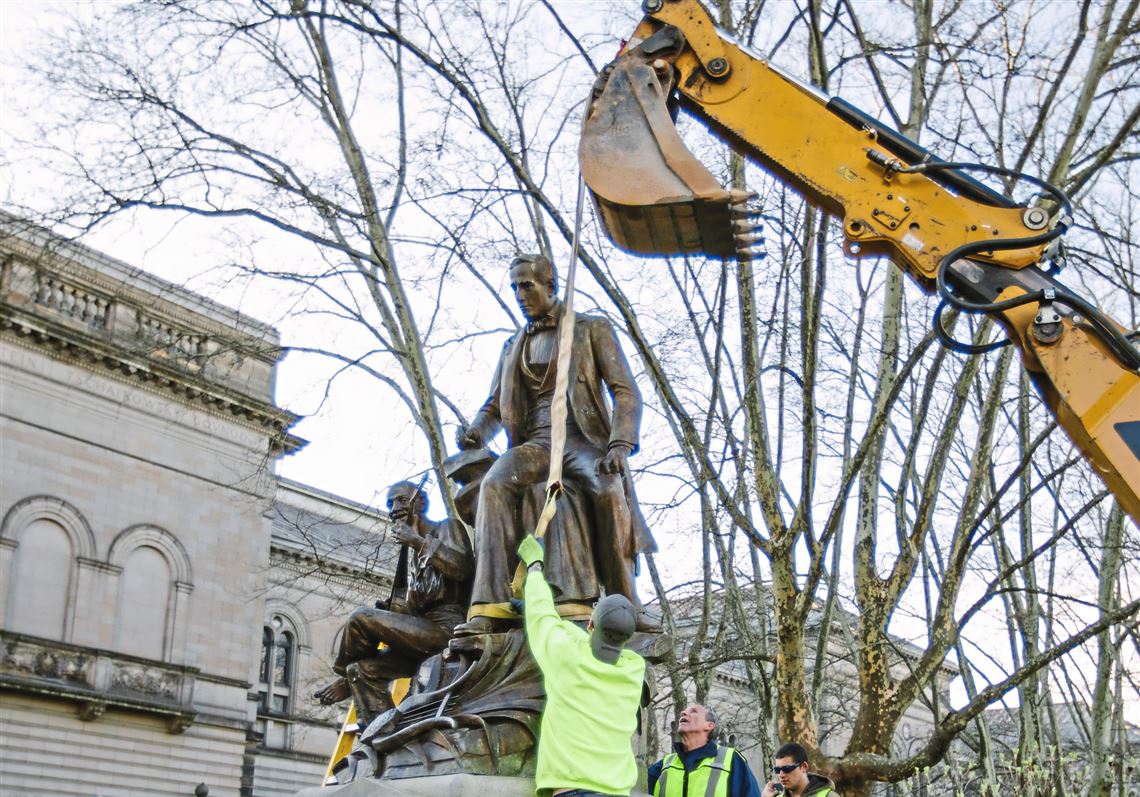 Statue being driven away from the original site 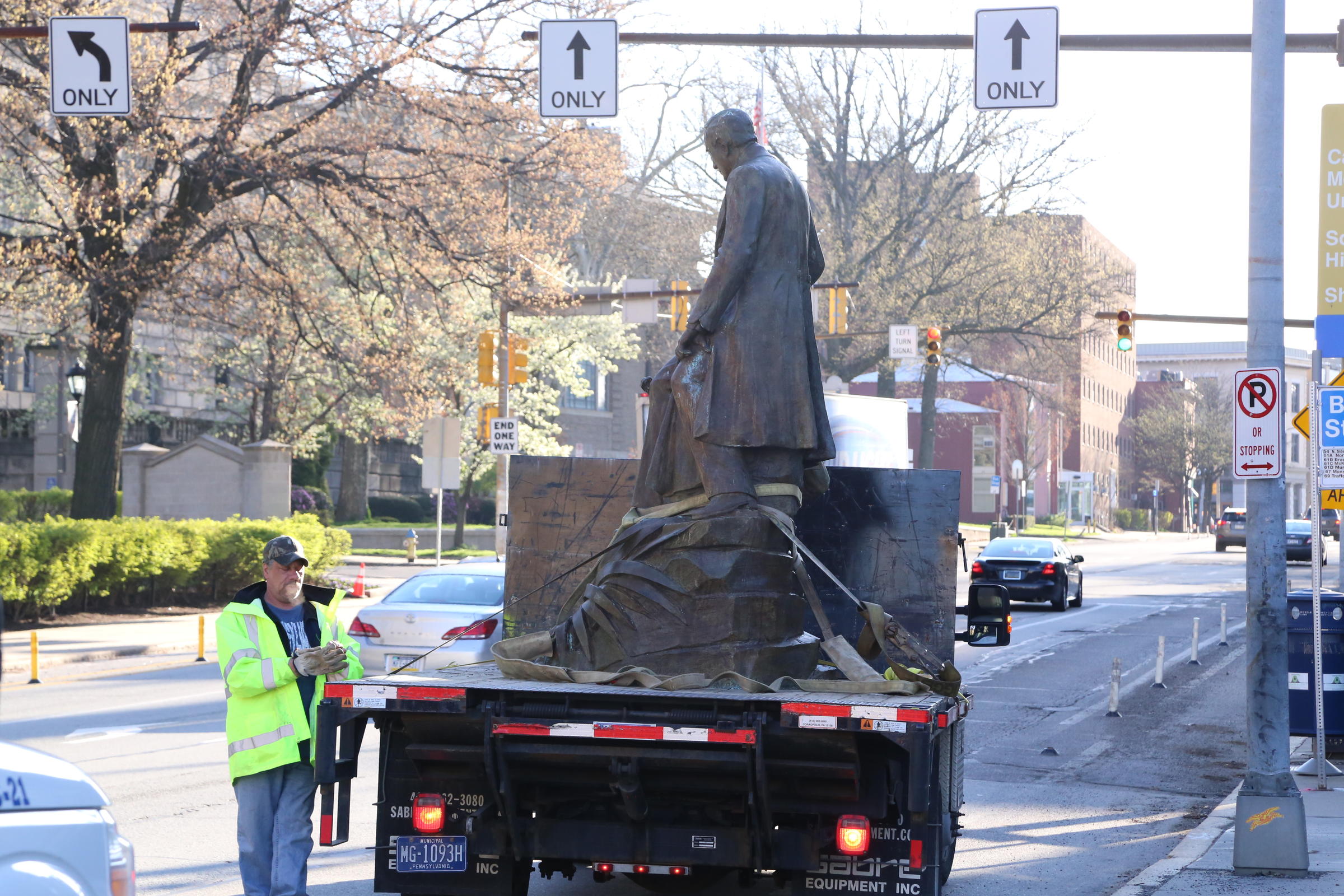 Stephen Foster was born on July 4th, 1826 in Lawrenceville [now part of Pittsburgh], PA and died January 13, 1864, in New York, N.Y. As a boy Foster began writing music and found much of his inspiration from attending Black church sermons with his family's servant Olivia Pise. Foster would also hear Black laborers in the warehouse where he worked for a short period of time. Between 1842 and 1848 Foster sold many songs to publishers such as "Oh Susanna", "Open thy Lettice," and "Old Uncle Ned". In 1849 he was commissioned to write songs for Edwin P. Christy's minstrel shows. Foster wanted to be known as one of the best minstrel show writers of all time.
Foster's statue was sculpted by Italian born artist Giuseppe Moretti (1857-1935). Moretti is best known for his 56-foot iron Vulcan statue in Birmingham Alabama.  In 1900, using money from a public fundraising drive, the Pittsburgh Press commissioned Moretti to erect a statue of the composer in Schenley Plaza of Pittsburgh Pennsylvania. The statue is not only of Foster, though, and that is where the controversy comes into place. The statue shows Foster sitting on a chair writing songs and sitting next to him, at his feet, is a poorly dressed and barefooted African American playing a banjo. Many believe that this is supposed to be the Uncle Ned from Foster's song. According to the book Discovering Pittsburgh's Sculpture, the design was suggested by Press editor T.J. Keenan, who imagined Foster "catching the inspiration for his melodies from the fingers of an old darkey reclining at his feet strumming negro airs upon an old banjo"1. The statue for many years has been considered racist by the community and officials and many plans to have the statue removed have been considered.

“It’s the single most offensive display of public art in Pittsburgh, hands down, It permanently depicts the Black man at the white man’s feet.”- Paradise Gray, hiphop activist, musician and writer.

Mark Brently Sr, an African Amercian member of the Pittsburgh school board also showed his dislike for the statue.

"It's just offensive on every level imaginable. I just wish I had a pickup truck strong enough because I would pull [the statue] off with a chain. ... It is a mirror of this city's policy [toward] and treatment of people of color."-Mark Brently Sr.

On April 26, 2018 the city finally decided to have the statue removed from its location. It was not destroyed, but its new location has yet to be decided.