This monument was built to honor those veterans in the community that served in the first World War. It recently has turned into a multi-war monument. It is now dedicated to the veterans who reside in Osteen. Walter Hawkins was a World War One veteran that had plans to honor his fellow veterans through a monumental park. 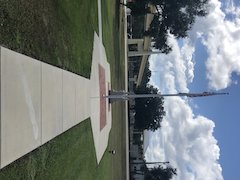 This World War 1 Memorial was built in unincorporated Volusia County in the community of Osteen during the mid 1900’s. The Monument itself honors young men who served in the first World War in 1914-1918. From the year 1917-1918 approximately 5,000 men from Volusia County had registered for the draft (Francke).

In the early years Osteen was located in between what we now know as New Smyrna Beach and Enterprise, along a sand trail. There were only two main roads during this time and it wasn’t until about 1924 when Debary Avenue in Enterprise extended to Doyle Road. Now State Road 415 runs through Osteen, all the way from Sanford to Samsula (SR44). The community of Osteen has pressed its name from the Osteen Bridge all the way south to the St. Johns river in Sanford, Florida.

The community of Osteen was founded by a man named Hezekiah Ellis Osteen in the Early 1850’s. Hezekiah served as a pirate in Florida’s Seminole Indian War in 1839. Following that he settled in north of DeLeon Springs. Shortly thereafter he moved to Saulsville, which was then named Osteen after him.

Following the First World War in the 1920’s the citizens of Osteen built a marble monument honoring some of the veterans that fought in the war (Walter Hawkins Memorial). A certain veteran named Walter Hawkins wanted to create a park for some of those that also served in the community. In April of 1957 the Volusia County Commission passed a resolution to create a park around the memorial, and it would include veterans of any war.  Hawkins was an attorney from Osteen, and sadly, he passed September of 1957, but his work is still recognized to this day.

The park today house the original marble monument, as well as a pathway with engraved bricks with the names, military branch, dates they served and the name of which war the Osteen residents and/or family members served and currently are serving in. The original monument was dedicated to specifically World War One,but it is now a Multi-War Memorial mentioning the Korean and Vietnam Wars as well. Some of the men chose to enter the military branch to serve our Country and some were drafted.

Kelly Bumgardner is the third generation of residency in Osteen . her grandfather was drafted into the army in the early 1950s to the middle 1950s. He served as a mechanic and heavy equipment operator and was stationed in Alabama during the Korean War (Personal Interview, Oct.15th). She had an uncle and cousins that have served our country before she was born and they have a marker located at the park, and some are currently serving our Country. One of the pavers around the monument was a childhood friend of Renee Bumgardner that she went to School with from Kindergarten thru High School. He joined the Marines out of High School. His life was taken in the 1953 bombing of Lebanon (Personal Interview, Oct.15th).

This monumental park is good for new generations to go and see past relatives and support the community in honoring those who have served. With new technology of social media, a longtime resident created a Facebook page for those who lived and currently live in Osteen. Through this everyone is able to share stories and pictures of past and present. It's through this group of people the community for five years now has come together for a block party where past and present residents can remember their childhood roots and those that not only serve in the military, but the community serving one another in caring for the family plots at the Osteen Cemetery.

Renee Bumgarder stated how it's an honor to live in a community where there are many generations still there and how they continue to reflect back on the roots and heritage remembering those before them and those currently serving and protecting our Country as well as caring for one another as a big family (Personal Interview, Oct.15th).

The Volusia County trail parking is right by the monument on New Smyrna Boulevard, in Osteen. This trail has brought many visitors from outside the Osteen Community. It wasn't until the mid 2000s when the original marble monument was moved to where it is now located. When this move took place there where a few old-time residents that came together to clean and restore the monument appearance. A Flag pole was placed in the center of the engraved bricks and a brief informational stand was placed near the monument that spoke about some of the World War 1 Veterans of Osteen. This monument is not only a place for the residents to go and honor those that have served in the military or are currently serving. It is also a great place for older generations to teach the newer generations about the lives of those who passed before us and how much different life was then during the war compared to the war life now.