The Salem Village Parsonage was built in 1681, and it is the location where the witch craft hysteria started. Now days, the town of Salem Village is known as Danvers, and it is home to many prolific places relating to the madness of witchcraft. People feared for their lives, because at anytime they could be accused of witchcraft. Salem in 1692 was a very difficult time to be alive. 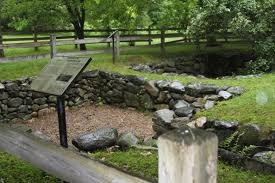 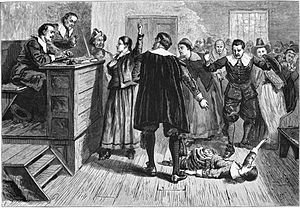 The Salem Village Parsonage was built in 1681 by the Salem parish for use by it's ministers. In the Parsonage, at different points, lived Reverend George Burroughs, Reverend Deodat Lawson, and Reverend Samuel Parris. The servants of the family lived here also, and it was said that one of them served the Devil as well as the Parris family. In the winter months of 1691 and 1692 a circle of young girls met in the home of Samuel Parris and his wife Elizabeth. The girls listened to stories told by the Parries' two slaves, Tituba and John Indian. These were the stories from Barbados of witchcraft and also of the occult. In January of the 1692 Parris' daughter and niece claimed that they started feeling strange forces pinching them and also terrorizing them. The town doctor was called upon to investigate these odd happenings, and the only diagnosis that he could come up with was bewitching. Tituba and John Indian made the girls a witch cake to see if they were really afflicted or not.
The field behind the Parsonage where the Parris family lived is where the girls were said to have done their rituals. The Devil was also said to make an appearance at these meetings to give strict instructions to the witches. Accounts at the time claimed that witches from all over Salem Village, Boston, Andover, and Essex County flew in on brooms. People of the town speculated that Tituba was practicing witchcraft on the people in Salem Village. Tituba was the among the first to be arrested, along with Sarah Good and Sarah Osborne. Tituba confessed to being a witch, and explained to the people of Salem Village that she was not the only one. Reverend George Burroughs was hanged as the grand warlock and king of the witches. Reverend Deodat Lawson only returned because he had heard that Samuel Parris was also in question.
Parris played a pivotal role in the Salem Witch Trials of 1692, and was also thought to be one of the main causes of all the hysteria. The Putnam family also had a hand in the witchcraft madness, but it was mostly Thomas Putnam. He took advantage of this craziness by accusing people the family disapproved of or wanted revenge against. Parries testified against nine people that were thought to be witches, and was a stenographer for four other trials. The very last hanging of the Witch Trials happened on September 22, 1692, because the court banned spectral evidence, which made all accusations baseless. The last of the accused witches were released in May of 1693. The jury chose not to indict Tituba, but she remained in jail because Parris would not pay the jail fees. Tituba was sold n April of 1693 to an unknown buyer who paid her fees. The Parsonage was torn down in 1784 to rid the town of it's past problem, and was excavated in 1970 for old artifacts.