This location is the site of the killing of two soldiers in Wayne County during the Civil War. At the time of the murders, this area was a part of Cabell County, Virginia. West Virginia would be formed roughly four months later. Two Zouave soldiers were killed on a nearby farm by Confederate soldiers. Their corpses were hidden in these caves in order to escape trouble from the Union army that was searching for their missing troops. These caves are in a remote location on Beech Fork in East Lynn, and are usually overlooked as there is no evidence left of the crime which occurred here.

A view inside the caves. 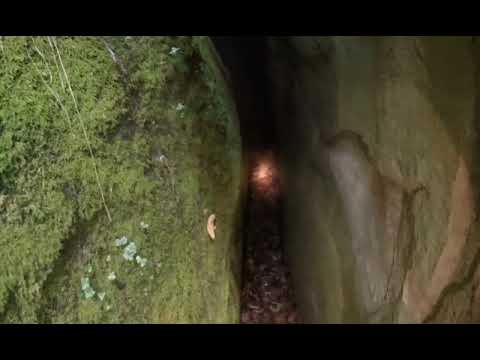 The Zouave Caves is a historical site that lies on Beech Fork in Wayne County, West Virginia, close to where three Union soldiers were killed in the Civil War.  At the time, this area was a part of Cabell County, Virginia, and the killings occurred on the farm of Leander and Helena Adkins-Gilkinson. The story of the killings was published in the February 7, 1863 edition of the Harper's Weekly newspaper under the subsection of "Southern Chivalry."

The event began when two men, John Costallo and John Cerbe, along with a local of the area, named Collins, were sent to find a missing detachment of the local Second Loyal Virginia Calvary.  Costallo and Cerbe were known as Zouave soldiers, which was a term used by French light infantry troops.  These kinds of soldiers enjoyed reckless brave behavior in battle.  After miles of travel with no luck in thier search for the missing detachment, they encountered gunfire from a group of rebel militia members. The exchange in gunfire ended in the injury of Collins, and Costallo and Cerbe were taken prisoner at the Gilkinson farm. The militia held the prisoners overnight and discussed what should be done with them. Options included sending them to Richmond, or to the main militia headquarters at the Logan Courthouse, or execution.

An interview between the Harper's Weekly newspaper article writer and a man by the name of H. Mays discusses exactly what happened on this fateful morning for the two Zouave soldiers.  Mays tells the reporter that the Confederates took one of the men up on a hill near the farm and tied him to a tree, before they shot and killed him.  Mays also said that he was not supportive of the soldiers being killed this way and that he had persuaded his fellow militia members to have mercy on the Zouaves, and that he wanted to see them sent to the Logan Courthouse headquarters. Collins had lasted longer than Costallo and Cerbe.  Mays says that he was teased until around midday, and then was taken away and killed.

Shortly after the killings, a Union soldier was sent out into the woods to search for the two missing Zouaves, but had no luck.  Instead, he found a dead animal near the farm, but this was the only piece of evidence that he had to go on a further hunt. Fearing the soldier would find the two dead men, the killers had taken the bodies away from the farm and thrown them into the caves, which would later become known as the Zouave Caves.  These caves are on the property of current landowner Leland Hugh Adkins.  As time has passed, the caves have fallen in and no longer exist.

"The Legend of the Zouave Caves." .