This 11-acre site served as a source of Native-American artifacts for over a century. Artifacts found at this site range from 9,000 years old to between 1,550 and 1,600 C.E. from several different Native American groups. The findings of archaeologist John Griffon’s research in 1943 gave the site national attention. Marshall University's Archaeological school was the next group to officially study the site beginning in 1984. Placed on the National Register of Historic Places in 1992 for the importance of its Native American artifacts. Collectors and archaeologists visited the site for over a century gathering artifacts, including John Adams, an amateur archaeologist who collected materials after 1920 which are currently on display at the Huntington Museum of Art as the John Adams collection.

The Clover Site. Griffon's work created the understanding that the Clover was a distinct Native American group. 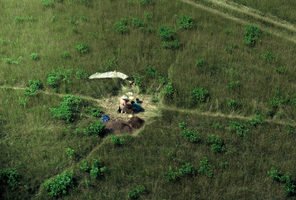 Archaeologist James Griffon focused his research on the Fort Ancient Culture described the Clover Site, through the findings of John Adams and S.F. Durrett, as a 5-acre area containing three mounds. Griffon’s publications of these findings in 1943 gave the site national attention, but local collectors had found artifacts there before his arrival. Marshall University’s archaeological study from 1984 to 1989 was the first full study of the site since Griffon's survey. Headed by Nicholas Freidan, they discovered the boundaries of the site through both direct and indirect surveys. The site has signs of habitation after the Fort Ancient Culture, suggesting the site has protohistoric involvement with Europeans or other Native American groups. Today the Huntington Museum of Art’s John Adams collection consists of artifacts found at the Clover site, primarily by John Adams. In 1992 the site was placed on the National Register of Historic Places, making it only one of twelve in West Virginia at the time.

The site contains the remnants of a town from the Fort Ancient Culture during its prehistoric phase. Designed in a semicircle centered on a plaza like other towns created by the Fort Ancient culture. Of the thirteen burials discovered at the Clover site, seven during Griffon’s research, one down river following a 1985 flood, and five by Marshall's archaeological investigation. For over a century artifacts were taken from the site, with the earliest originating from the Clovis culture from 9,000 years ago. Since part of the site is on the banks of the Ohio river a portion of the site has eroded, matching the other Fort Ancient sites all of which have been disturbed. The Marshall investigate took an estimated three percent of the site's artifacts, but up to 90 percent of the site is preserved. The most damage done to the site came from plowing which disturbed the top layers of soil and caused the erosion of the three mounds.

Archaeological work on the site focuses on two levels of soil, the first from 7 to 20 inches below the ground, and the second “feature-bearing zone” which include pits and graves. Ceramics, clay figures, copper and brass objects, and glass beads are among the artifacts discovered at the Clover Site. Of the three radio-carbon dates were taken from the site only two are considered valid, the third’s sample size was too small to be validated. First dated to 1450, and the second 1487 C.E., confirming the site's mid-15th to early 17th-century occupation by the Fort Ancient culture.