This iconic statue located in historic Kelly Ingram Park honors the memory of the brave foot soldiers who often defied police during the civil rights demonstrations in Birmingham during the 1960s. Designed by artist Ronald McDowell, this bronze statue stands over 13 feet tall and depicts a moment that was captured by photographers and became one of the leading image of many Americans when they think about the Civil Rights Movement. The statue features a tall, angry policeman restraining his ferocious dog from a little boy. Not only is the police officer yelling, he has a very angry dog that appears to also be attacking the small child. This image shocked the world, and opened the eyes to many Northerners to exactly what was happening in the South. This statue is important for many reasons from the iconic nature of the photograph that led many white Americans to pay more attention to the plight of African Americans to the way it demonstrates the role of young adults and children within the modern Civil Rights Movement. 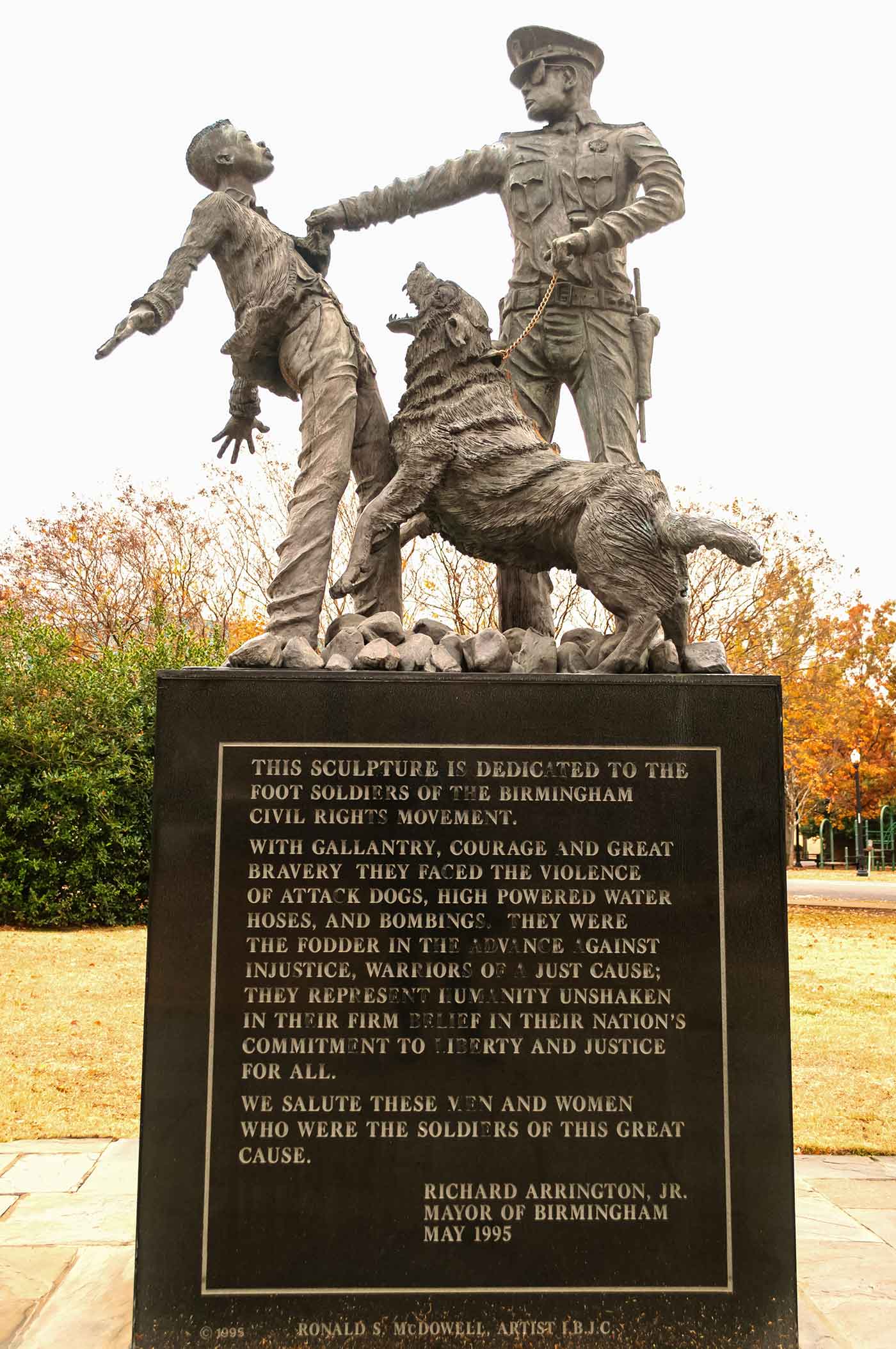 The spring of 1963 saw a wave of violence in the South and Birmingham was the epicenter of many of the attacks against local civil rights leaders. With many clergy and civil rights leaders houses being firebombed by white supremacists, Birmingham earned the notorious nickname of "Bombingham" among civil rights supporters. A photograph by Bill Hudson depicting a small child being grabbed by a police officer while being attacked by an angry dog soon became a symbol of the city and the violence some African Americans faced.

The statue is engraved with the following quote   “This sculpture is dedicated to the foot soldiers of the Birmingham Civil Rights movement. With gallantry, courage, and great bravery they faced the violence of attack dogs, high powered water hoses, and bombings. They were the fodder in the advance against injustice. Warriors of a just cause; they represent humanity unshaken in their firm belief in their nation's commitment to liberty and justice for all.We salute these men and women who were the soldiers of this great cause.”

During the Civil Rights Movement, local protesters who would later be memorialized as "the foot soldiers" of the movement formed the core of each campaign against segregation and voting suppression. The monument is one of several recently-created monuments within Kelly Ingram Park that is depicts scenes from the local civil rights protests of the 1960s.

As more historians studied the images and considered the recollections and perspectives of diverse participants, including the police, this image has taken on a more nuanced meaning. According to the officer in the photograph, he was actually trying to hold back his dog from a startled young boy. The boy in the picture acknowledged that this interpretation was plausible as he does not recall that the officer was attempting to harm him. At the same time, it is important to note that the photographer captured something important in the image as few police officers actively prevented or arrested white adults who were attacking civil rights protesters that day.