On November 25, 1910, a fire destroyed a factory at this location. 26 factory workers, mostly young women, died as a result of unsafe practices. Six of the workers were consumed by the fire while another twenty jumped to their death rather than share their fate. The factory produced a number of products from explosives to wooden boxes and clothing. Officials in neighboring New York City warned that they were likely to endure a similar tragedy unless they did something to prevent unsafe factories in their city. Tragically, the city failed to learn from the Newark fire. Four months later, the Triangle Shirtwaist Factory fire took the lives of 146 workers in New York. Like the 1910 New Jersey fire, most of the victims were women.

On November 25, 1910, this factory at the corner of Orange and High Street (now MLK Jr. Boulevard) caught fire and trapped 26 women. 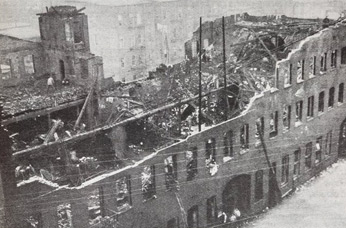 In 2013, Newark commemorated the 1910 fire with this plaque that bears the names of the victims