Discover an outstanding collection of American art housed in a nineteenth-century mill with a dramatic steel and glass addition overlooking the banks of the Brandywine River. Renowned for its holdings of the Wyeth family of artists, the museum features galleries dedicated to the work of N.C., Andrew and Jamie Wyeth. The Brandywine Conservancy has been instrumental in permanently protecting more than 59,000 acres of land in southeastern Pennsylvania and northern Delaware. 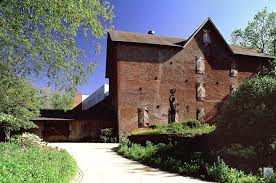 In the mid-1960s, Chadds Ford, Pennsylvania in the historic Brandywine Valley, faced possible massive industrial development.  The impact would have dramatically changed the character and future of a community that was then largely rural.  At the same time, and for decades thereafter, development proposed throughout the region, particularly in floodplain areas, threatened to devastate water supplies for numerous communities in southeastern Pennsylvania and northern Delaware, including the City of Wilmington. Appreciating the need for rapid action, a group of local residents bought endangered land and founded the Brandywine Conservancy in 1967.  The first conservation easements, protecting more than five and one-half miles along the Brandywine, were granted in 1969.  Today, the Conservancy holds more than 440 conservation easements and has protected more than 45,000 acres in Chester and Delaware counties, Pennsylvania, and in New Castle County, Delaware.

The Conservancy is a leading local and national advocate for responsible land use, open space preservation and water protection.  The Conservancy focuses on integrating conservation with economic development through its Land Stewardship and Municipal Assistance programs.  The Conservancy works with individuals; state, county and municipal governments; and private organizations to permanently protect and conserve natural, cultural and scenic resources.

Brandywine River Museum In 1971, the Conservancy opened the Brandywine River Museum of Art in the renovated Hoffman’s Mill, a former gristmill built in 1864 that was part of the Conservancy’s first preservation efforts.  The museum has an international reputation for its unparalleled collection and its dedication to American art with primary emphasis on the art of the Brandywine region, American illustration, still life and landscape painting, and the work of the Wyeth family.

Among the hundreds of artists represented are Howard Pyle, many students of Pyle who affected the course of American illustration, N. C. Wyeth, Andrew Wyeth, and Jamie Wyeth.  There is work by hundreds of famous illustrators.  Landscape, still life, portrait and genre painting includes work by Benjamin West, Gilbert Stuart, Asher Durand, W. T. Richards, William Harnett, John Haberle, J. D. Chalfant, Horace Pippin, and many others, while the major still life collection includes paintings by William Harnett, John Peto, George Cope, John Haberle, Horace Pippin, and many more artists.  Nearly 300 special exhibitions have been shown in the museum’s six galleries, along with constant installations of work from the collection.  A variety of educational programs is offered throughout the year.

The Brandywine Conservancy has thousands of members throughout the region and the nation, including a Young Friends group that hosts events throughout the year.  More than 300 volunteers work as docents in the museum, as gardeners in the native plant gardens that surround the Conservancy’s buildings, and in other capacities throughout the Conservancy.  Volunteers organize an annual antiques show and other events to support an acquisition fund that has added more than 200 works of art to the museum’s collection.

In 2008, the Brandywine Conservancy was one of the first conservation organizations awarded accreditation by the Land Trust Accreditation Commission.  The award is an affirmation of careful management and effective environmental programs.  In the same year, the Brandywine River Museum received accreditation from the American Association of Museums for the fourth time.  The Brandywine Conservancy has always maintained the highest professional standards, a commitment to excellence, public accountability, sound financial management, innovation, and growth of public services.