The Mid-Continent Tower is one of Tulsa's iconic skyscrapers. Rising to a height of 527 feet, it features 36 stories and is topped by a unique copper roof. Although it appears as if it were built all at once, it is actually two buildings. The first 16 floors were constructed in 1918 and that building was called the Cosden Building, which was the city's first skyscraper. It was built by oil industrialist Joshua Cosden on the very site of Tulsa's first schoolhouse. The additional 20 floors were constructed 1984 as a separate structure, cantilevered over the original. The building was added to the National Register of Historic Places in 1979 for its Neo-Gothic and Sullivanesque architecture and the fact that it represents Tulsa's emergence as an important economic center thanks to the oil industry. 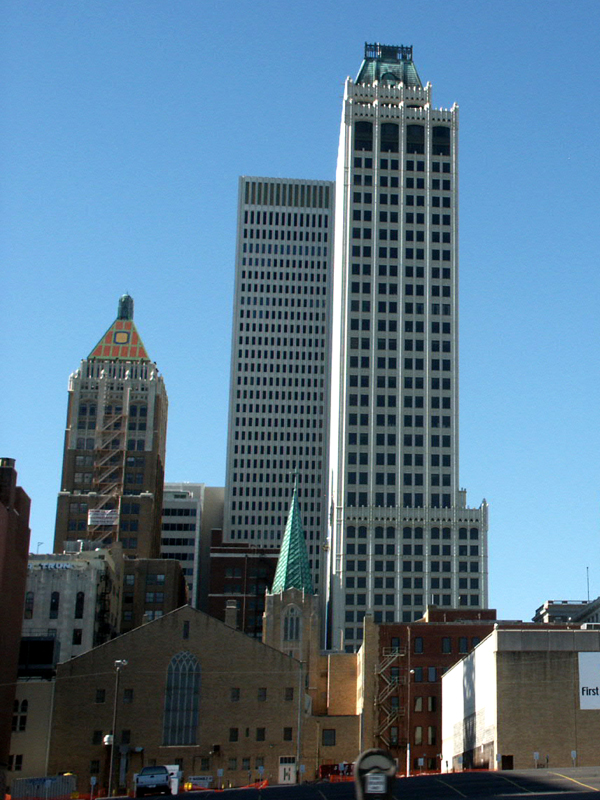 Joshua Cosden rose in the ranks of the oil industry to become a very rich man. He admired the architecture in New York City, especially that of the Woolworth Building. He hired its architect, Cass Gilbert, and the Cosden Building featured many similar Gothic design elements. The building was finished on the same day World War I ended (Armistice Day, November 11, 1918).

A few years later in 1925, the board of directors of Cosden Petroleum voted to remove Cosden. The building became the headquarters of Mid-Continent Petroleum. Then in 1977, off-shore oil company Reading & Bates purchased the building. This company oversaw the construction of the 20 extra floors, despite a drop in oil prices in the early 1980s that threatened to stall the project mid-way.