Constructed in 1914, this building served as the headquarters of the Alaskan Brotherhood, an organization founded by area Tlingit to represent them and other Alaskan Native American communities who were united against the discrimination they faced. The organization was established in 1912 and headquartered in Sitka owing to the large population of natives that found themselves excluded from many restaurants and other places of public accommodation. The organization continues to work on the behalf of native people in Alaska, and the hall includes offices for administrators of the Indian Education Act and Alaska Legal Services. The hall includes a large auditorium and hosts various educational and social events throughout the year. Visitors are welcome and the site was declared a National Historic Landmark in 1987.

This is the original building of the Alaska Native Brotherhood. It was erected in 1914 in Sitka Alaska.. It still serves as the main location of the society meetings. 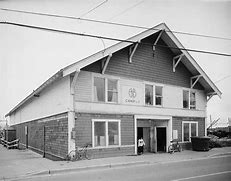 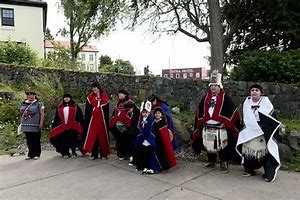 This the brotherhood hall as viewed from Sitka bay. The brotherhood does not have meetings during fishing season due to the impact fishing has on their economy. 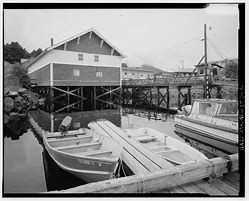 Starting in the late 18th century, Americans of European descent joined Russians and others who explored the coasts of Alaska in search of commodities such as animal fur and pelts. Most native peoples opposed the incursion and resisted trade goods, but others began trading furs and other goods leading to the establishment of trading forts in Sitka and Yakutat in 1799. In 1802 and 1805, Natives attacked and devastated these two outposts as a reaction against the disease brought by Russian and other traders. These attacks and other acts of resistance caused many of the Russian trading companies to leave the area. The Hudson Bay Company was more successful and natives became increasingly more reliant on trade items while the animal population declined due to overhunting. The dependency on trade and the increasing influence of foreign peoples, cultures, and religion led to a loss of autonomy among area native peoples.

The Alaska Native Brotherhood was established in 1912 by Sitka men but also included native people from throughout the area. The original men who founded the brotherhood were influenced by their Presbyterian beliefs ad they were encouraged by missionaries to form their organization. Presbyterian missionaries provided education and assistance to the native association and members of the group spread church rituals and Bible study.

Women formed their own groups such as the “Women’s Village Improvement Society.” Members of this organization aided the sick and later became an auxiliary of the Alaska Native Brotherhood called “Daughters of Alaska.” The organization now operates as the “Alaska Native Sisterhood.” In southeast Alaska almost, every community had a branch of the brotherhood and sisterhood.

The brotherhood/sisterhood has an Executive Committee made from three of the local chapters. The organization is led by a committee who establishes the guidelines and they meet once a month except during the fishing season. The Alaska Native Brotherhood includes many symbols, including their official colors of red and gold. Red represents salmon and gold is for the gold of Alaska. The The sisterhood has their own colors of blue and white, blue represents fidelity and white stands for purity.

In the early years, the Brotherhood and Sisterhood worked to preserve and restore civil rights for native Alaskans, including equality in public schools and public accommodations. The organization also works to promote laws such as workers compensation. The Brotherhood won a suit for Alaska Native Claims Settlement Act of 1971 that included a substantial cash settlement and the reallocation of land.

The Alaska Native Broyherhood. Alaskool.Org. . . http://www.alaskool.org/projects/native_gov/documents/anb/anb_2.htm. This website details the plight of the native Alaskan throughout history. It describes from the beginiing of fur trading in the 1790s until present day activity.