The Village Café, a quaint breakfast and lunch restaurant, is located off the east side of Main Street [4]. Parking for the Café is on Main Street [4]. To access the building, visitors must descend a stairwell from Main Street to a flagstone path that leads to a flagstone patio in front of the Café [4]. In 1907, Reverend William Rutherford Savage, the local Episcopalian priest, opened the site as the Randall Memorial Workshop [1]. The workshop was named for the NC artist, William George Randall (W.G. Randall) [1]. W.G. Randall, born in Burke County, obtained an art degree from UNC Chapel Hill and eventually settled in Blowing Rock, where he fell in love with mountain crafts [1,3]. The Randall Memorial Workshop, once opened, served as a hub for local mountain crafts [2]. The building changed ownership throughout the 20th century until Ann Whatley purchased it in 1990, and she brought it to the attention of local historical societies [1,4]. After Whatley brought the historic significance of the building to the attention of those societies, they submitted it for review to the National Register of Historic Places [1,4]. In 1991, the National Register recognized the Randall Memorial Workshop, the present-day Village Café, as an Historic Building [1,4].

The exterior of The Village Café 2018. 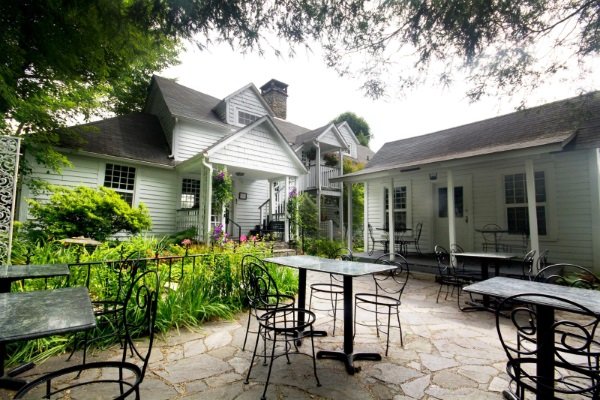 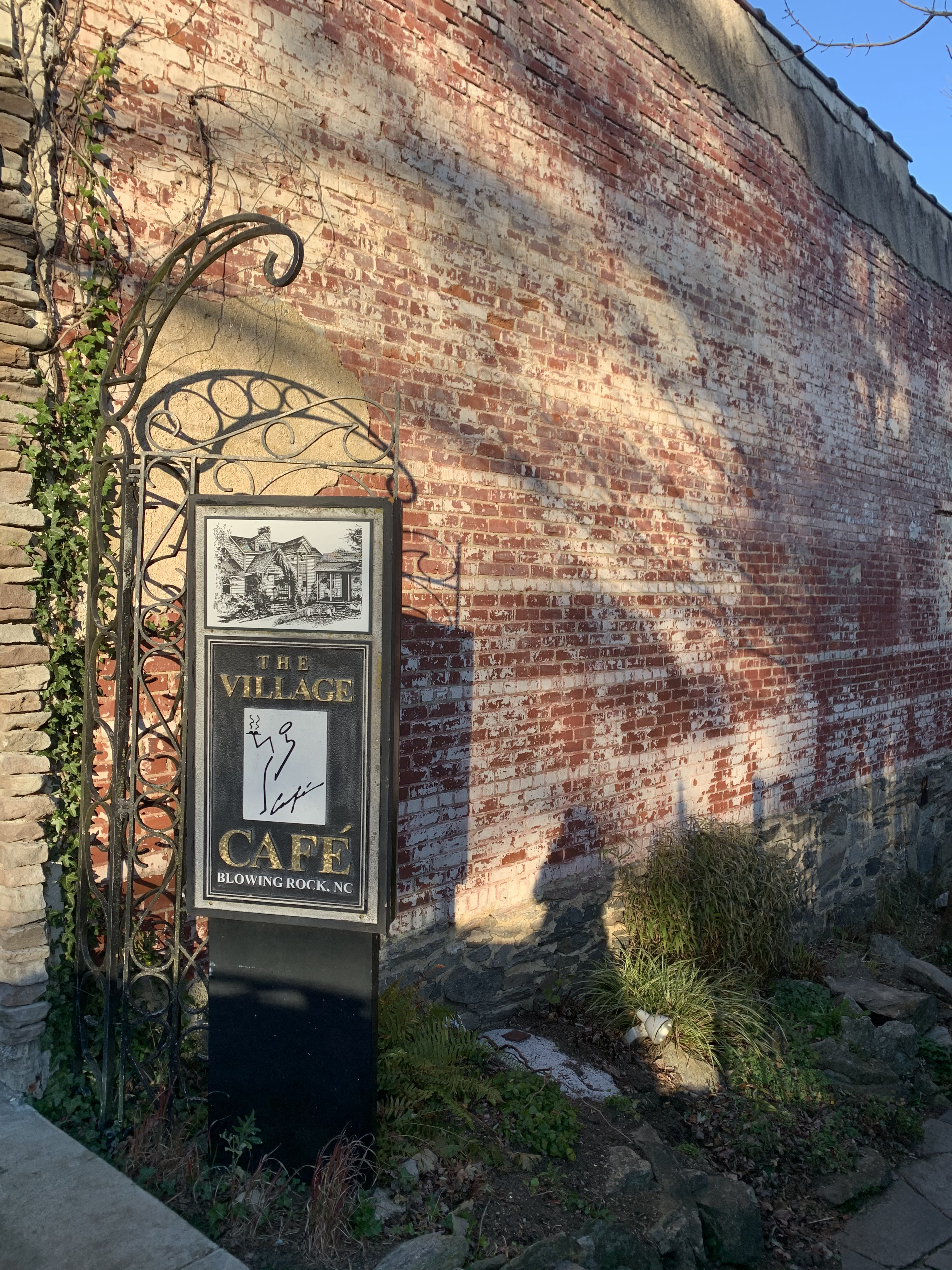 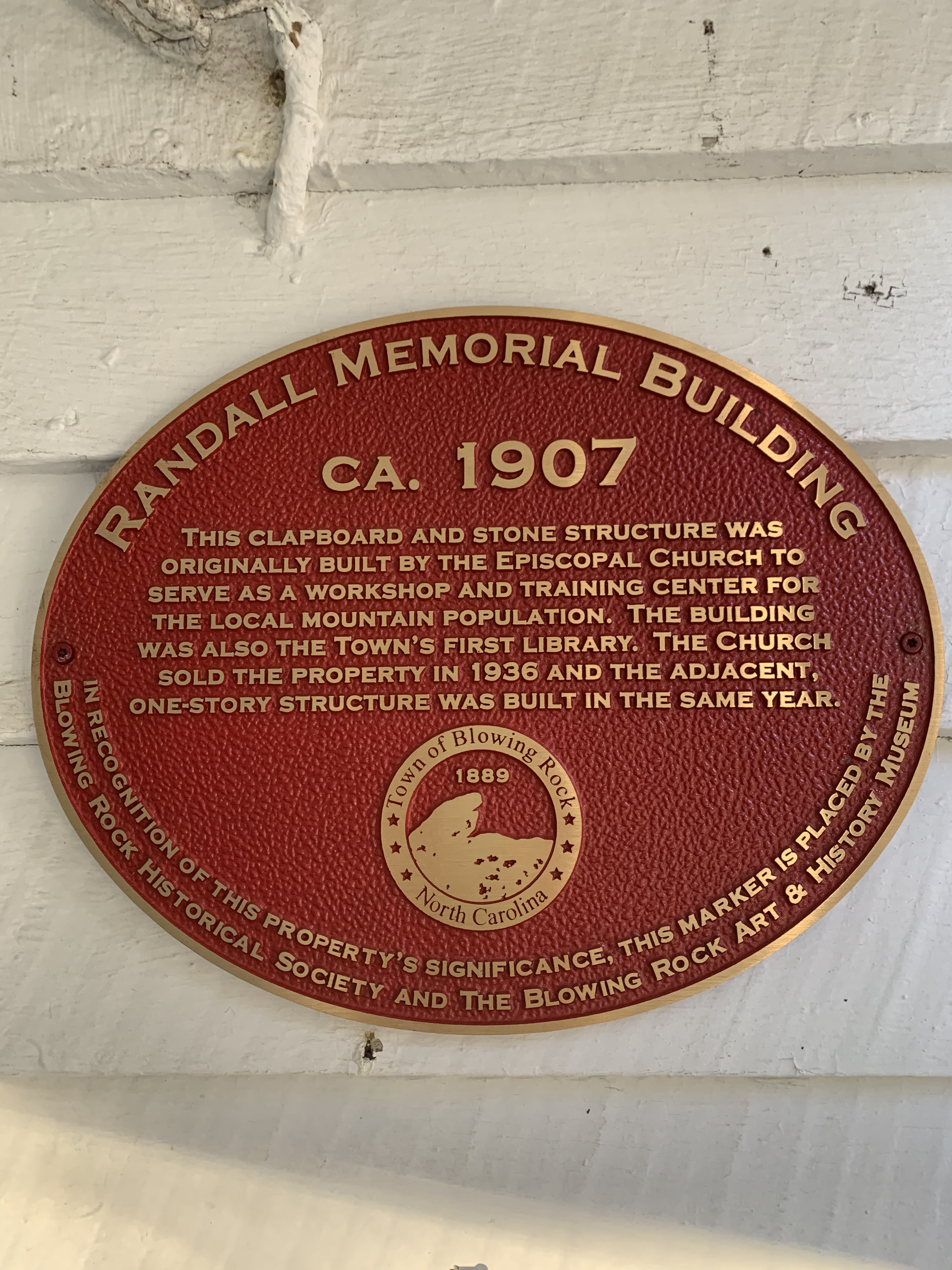 Walkway to main building. Photo submitted to Yelp May 2016. 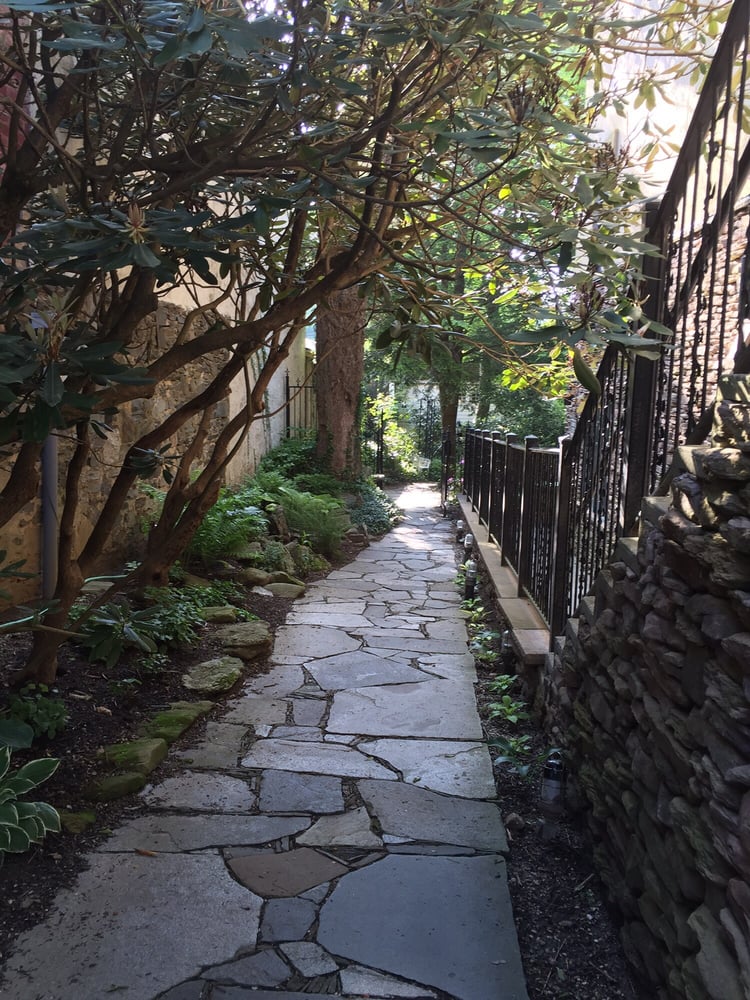 Dr. H.G. Jones in 1969 on the porch of the back cottage constructed in 1938 for use by the Local Council of Girl Scouts. Used with permission from the café's website manager. 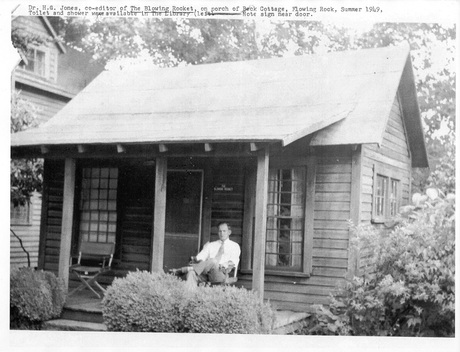 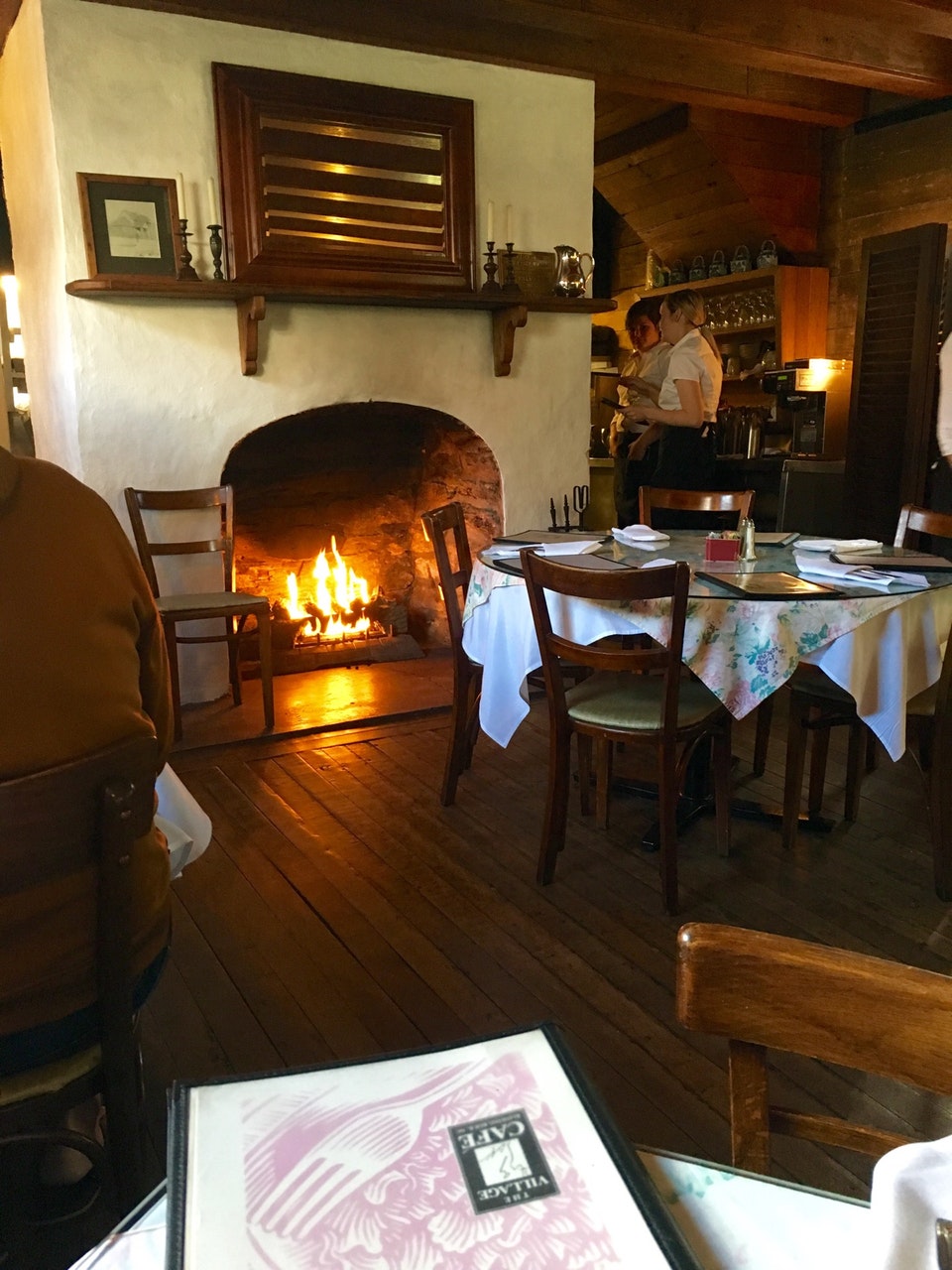 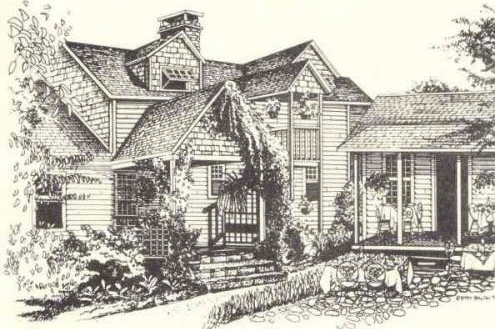 At the close of the Civil War, northern philanthropists developed an interest in improving the living conditions of North Carolina mountaineers, and their schooling in particular [7]. Alongside that interest, the northern philanthropists realized there was economic opportunity in mountain handicrafts like weaving and spinning [7]. One of those philanthropists, Miss Frances Goodrich, organized a group of mountain women near Asheville, and that group worked to produce hand-woven goods and to teach the hand-weaving tradition to future generations [4]. Goodrich’s efforts resulted in the establishment of the Southern Highlands Handicraft Guild [4]. Another woman, Mrs. George Vanderbilt, established the Biltmore Homespun Industries in 1900 [4]. The two women helped spark a national interest in mountain handicrafts [4].

The 1890s were economically disastrous for Blowing Rock, as a region-wide depression hit Watauga County [4]. Accompanying the depression was a movement initiated by Blowing Rock residents to sell their livestock [4]. By 1897, farmers had sold all of their livestock and were searching for a stopgap, uncertain what other goods they had to sell [4].

In January 1905, W.G. Randall paid a visit to Reverend Savage at the Episcopalian Mission House, the center of religious life in Blowing Rock [6]. During that visit, Randall outlined a plan to Reverend Savage to build a small house beside the Mission House that would house the best cabinet-makers in the mountains and allow them to hone their crafts [6]. Randall hoped to eventually include other industries like spinning and weaving, and he recommended that they buy a loom and hire women to wield it so that visitors could see the high level of craftsmanship among the mountaineers [6]. Randall wanted to create a workshop that would allow the best mountaineer artisans to demonstrate their expertise and to profit from their respective crafts [6].

When W.G. Randall laid out this plan to Reverend Savage, the Reverend expressed doubts in their ability to secure the land necessary for the venture [7]. Fortunately, a lot near the Mission House became available for purchase shortly after their conversation [7]. The Mission House itself was built beside the old post office, and it was the lot that housed the old post office that became available for purchase [4]. The two men moved the old post office building closer to the Mission House, the de-facto Episcopalian Church in Blowing Rock, and remodeled it with the help of the Episcopalian congregation [4,7]. They fashioned the building into a workshop that included both a cabinet shop and a loom room on the first floor [4,7]. On the second floor, they built two art studios that they made available for local art students to use, as W.G. Randall was passionate about the development of local artisans [4,7].

Unfortunately, W.G. Randall died from tuberculosis on December 10, 1905, and he never saw the completion of the workshop [7]. In 1906, Reverend Savage placed ads in Raleigh newspapers asking for monetary donations to complete the construction of the building [7]. He asked that people donate funds and furnishings that would allow the Episcopalian congregation to turn the workshop into a community business [7]. He estimated that finishing the project would cost a total of $300, with $150 of that used for construction alone [7]. Reverend Savage made it clear in his ads that the workshop planned to employ only the best mountaineer artisans, in honor of W.G. Randall’s original vision for the workshop [7]. It was W.G. Randall’s vision that drove the project forward, and it was in his honor that the building was named the Randall Memorial Workshop [7].

While the building served as a workshop for mountaineer craftsmen, it also served Blowing Rock as a social center [4]. Blowing Rock residents used the Randall Memorial Workshop as a place to purchase crafts and as a community center where they gathered before the fireplace on the first floor to discuss the events of the day [4]. When Reverend Savage moved out of Blowing Rock in 1917, he left the workshop in the care of the Episcopalian Diocese, who used it as a library and reading room that was open to the public [4].

In 1923, a horrendous fire swept through Blowing Rock that nearly destroyed the town [5]. The Randall Memorial Workshop, a wooden building, survived the fire [5]. The fire of 1923 was so bad that town residents decided to establish the Blowing Rock Fire Department the selfsame year, and they issued an edict that banned wood construction on Main Street [5]. Because the Randall Memorial Workshop survived the fire of 1923, its current day iteration of the Village Café serves as a historical testament to the architectural styles that preceded the 1923 ordinance [4,5].

In 1936, the Blowing Rock Community Club (BRCC) purchased the building and started a lending library [4]. The resident of the second-floor apartment, Mrs. C.V. Henkel, ordered the construction of a one-room cottage to the northeast of the building in 1938 for the local Council of Girl Scouts [4]. The BRCC sold the property containing both the workshop and cottage in 1946 to Charles and Mary Beck, who used it as their summer home [4]. The Beck heirs sold the property to Frances Feely in 1983, who sold it in 1990 to Ann Whatley [4].

Whatley brought the property to the attention of local historical societies, in 1990, because she realized the site had played pivotal roles in both the economic and social realms of Blowing Rock’s history, and she understood the significance of the wooden architecture [1,4]. The National Register of Historic Places recognized the Randall Memorial Building, the current-day Village Café, as a Historic Building in 1991 [1,4]. Ann Whatley, alongside her husband, Andy, transformed the workshop into its present-day iteration, the Village Café, which still functions today as a social nexus for Blowing Rock residents [1,4].

[1] “About the Cafe.” The Village Cafe. Accessed September 23, 2018. https://thecafevillage.weebly.com/about-the-cafeacute.html