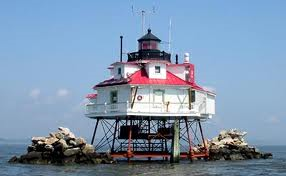 Sunset behind the Lighthouse 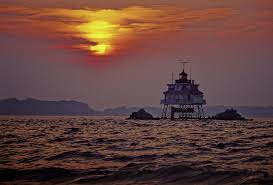 The Thomas Point Shoal Light Station dates back to 1824 when Congress appropriated $6,500 for construction and outfitting of a 30 foot, land-based, light tower, a small keepers dwelling, and a well. The seven acres of land for the site was purchased for $525 and the construction contract was awarded to John Donahoo and Simon Freeze in February of 1825. The resulting light was commissioned in December of that year with John Bovis of Baltimore, Md., providing the Argand style lighting apparatus. Few details exist about this original light. It is assumed it was built of granite quarried in Port Deposit, Md. (Donahoo and Freeze were also awarded the construction contract for the Pooles Island Light at this time and the two projects were underway simultaneously.) The light stood on a bank overlooking the Chesapeake Bay, approximately 100 feet from the water. The site proved particularly susceptible to shore erosion. Stone was initially laid at the waterline, but the attempts were not sufficient to impede the erosion. By 1838 the water had come to within 15 feet of the tower and plans were made to move it. In 1972 the Coast Guard announced that it was considering plans to automate the station and dismantle the cottage. The public rallied around the light and in 1975 it was listed in the National Register of Historic Places.  The lighthouse was manned until 1986 and was the last lighthouse on the Chesapeake Bay to be fully automated. More recently, its image was a runner up for Maryland’s back of the 2000 U.S. quarter coin.In 1999, the lighthouse was designated as a National Historic Landmark, the highest recognition that a historic structure can receive. It is only one of nine lighthouses in the country with this designation, which it received in recognition of it being the only extant and operational cottage-style screw pile lighthouse in the country still located in its original location.

This Beautiful Landmark offers cruises to the public. All tours depart from Annapolis, Maryland. The specific dock is located at water's edge behind the Annapolis Maritime Museum located at 723 2nd Street Annapolis, Maryland 21403. The lighthouse sends out a fog signal horn every 15 seconds. This lighthouse would be a wonderful morning or late evening view for the couples to take a cruise to see. As you see from the photo the sunset is a beautiful site to see.