Lucy the Elephant is a six-story elephant-shaped building constructed in 1881 of wood and tin sheeting. It is located in New Jersey, two miles south of Atlantic City. This landmark is fenced in and contained, making child supervision easy. Children and families are sure to enjoy visiting the only elephant in the world "you can walk through and come out alive." Over the years, Lucy had served as a restaurant, business office, cottage, and tavern.

Side view of Lucy. 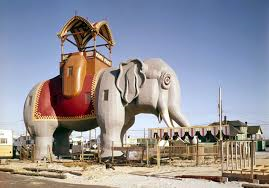 A view of Lucy from the air. 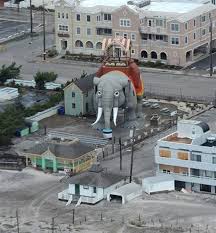 Lucy the Elephant is a six-story elephant-shaped example of novelty architecture, constructed of wood and tin sheeting in 1881 by James V. Lafferty. Lucy is in Margate City, Atlantic County, New Jersey, two miles south of Atlantic City. She was constructed to sell real estate and attract tourists. During a visit to Lucy the Elephant, trained volunteers and staff will provide a tour to visitors. On the tour you will learn about Lucy's unique architecture and history. You can climb a spiral staircase through her insides all the way up to the howdah on her back, providing a spectacular 360-degree view of the surrounding shore area.

In 1881, the U.S. Patent Office granted Lafferty a patent giving him the exclusive right to make, use, or sell animal shaped buildings for seventeen years. Lafferty paid for the construction of his first elephant-shaped building in what was then known as South Atlantic City, but now called Margate. He employed Philadelphia architect William Free to design the building and a Philadelphia contractor constructed the structure at a cost of $25,000-$38,000. Originally named "Elephant Bazaar," the building is sixty-five feet high, sixty feet long, and eighteen feet wide. It weighs about 90 tons and is made of nearly one million pieces of wood. There are twenty-two windows and its construction required 200 kegs of nails, four tons of bolts and iron bars, and 12,000 square feet of tin to cover the outside. It is topped by a howdah carriage.

This structure was sold to Anton Gertzen of Philadelphia in 1887 and remained in the Gertzen family until 1970. Over the years, Lucy had served as a restaurant, business office, cottage, and tavern. By the 1960s, Lucy had fallen into disrepair and was scheduled for demolition. In 1969, Edwin T. Carpenter and a group of Margate citizens formed the Margate Civic Association, which later became the Save Lucy Committee under Josephine Harron and Sylvia Carpenter. They were given a thirty-day deadline to move the edifice or prepare for its demolition. The group came up with various fundraisers to help Lucy the Elephant. In 1970, the building was moved about 100 yards to the west- southwest and a bit inward from the shoreline. The building was also completely refurbished. The building's original wooden frame buttressed by a steel one, and the deteriorated howdah was replaced with a replica. A plug of green grass set into the howdah platform refracts light in Lucy's interior. In 1976, Lucy was designated a National Historic Landmark. Each year the building's birthday is celebrated with children's games and much fanfare each July 20th, or on the following weekend.