The John A. Roebling Suspension Bridge spans the Ohio River between Cincinnati, Ohio and Covington, Kentucky. Few American cities can claim a landmark as distinctive as Cincinnati's Suspension Bridge. The Covington and Cincinnati Bridge, in 1984 renamed after designer John A. Roebling, and all the while called by locals simply "The Suspension Bridge", has been a symbol of the city since its completion in December of 1866. More than just a nostalgic decoration, the old bridge remains an important river crossing for thousands of cars and buses each day. 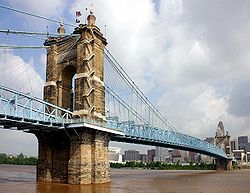 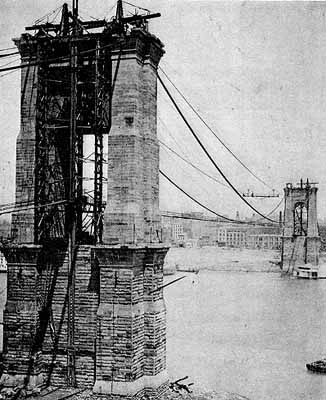 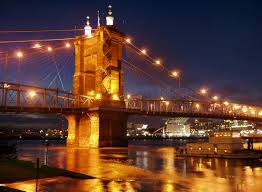 Cincinnati was the first major city in "The West", or what is today known as the Midwest.  Its 1850 population of 115,435 ranked sixth in the United States, far ahead of St. Louis (77,860) and Chicago (29,963).  Its cross-river neighbors of Covington and Newport were home to 20,000 more residents, and as ferry traffic increased, the necessity of a bridge became apparent.  The 1849 charter issued by the state of Ohio required no piers in the river, a length of 1,400ft., and a deck clearance of 112ft.  By the time construction started in 1856, a revised charter eased the required length to 1,000ft. and height to 100ft.  The ensuing period of construction stretched over a decade, interrupted by financial shortages and the Civil War, during which the city and unfinished bridge were under threat of attack.

The bridge opened to pedestrians in December 1866, and the 1,057ft. main span was at that time the longest in the world, surpassing the Wheeling, WV suspension bridge (1849).  Not only was the Cincinnati Suspension Bridge the world's longest, but it was also the first to utilize both vertical suspenders and diagonal stays fanning from either tower.  This advance was next seen on the Brooklyn Bridge (also designed by John Roebling), which surpassed the Cincinnati bridge in length and almost every other statistical category in 1883.
Due to inflation during and after the Civil War, the original iron and oak deck was built as cheaply as possible. In 1894 tracks were laid across the deck but street cars were limited to a "walking" 1.5mph speed limit. Therefore in 1896 a complete rebuilding of the bridge deck was undertaken. While the original deck had been built cheaply, the stone towers were overbuilt and capable of carrying a much heavier load. Therefore a second set of 10.5" main cables, a wider steel truss deck (a four track deck was even briefly considered, with outside tracks curving around the towers), and an extension of the northern approach were included in this project. In order to keep the bridge open and maintain the 100ft. height requirement, the old deck was jacked up several feet on its suspenders while work proceeded above, below, and around it. The new deck was built around the old deck from the towers towards the center, first hung from the new main cables, and then transferred over to the elaborate four cable arrangement seen today. The reconstruction significantly altered the appearance of the bridge, but allowed it to remain useful in the 20th century, with a 30 ton weight limit.
In the 1920s a pair of ramps were constructed from the north end of the Suspension Bridge to Dixie Terminal, an ornate ten floor office building and street car terminal located at the southwest corner of 4th & Walnut St.  The ramps provided Covington trolleys with a grade separated route to the center of downtown, and the terminal building was originally intended to connect, via underground pedestrian passages, with the never-built Fountain Square Station of the infamous Cincinnati Subway.  Since Cincinnati had an unusual two-wire street car system (enforced by a city ordinance) versus the standard single overhead wire and track ground arrangement of Covington and nearly everywhere else in the world, cars had to raise a second pole when the northern end of the bridge was reached before entering the building. After street car service ceased, the ramps were rebuilt for diesel bus service in the late 1950s as part of the construction of Ft. Washington Way. These ramps were torn down in summer 1998 as reconstruction of Ft. Washington Way began, and buses stopped using the terminal.  Kentucky buses still use the Suspension Bridge heavily, however they now run a short route through downtown Cincinnati.