The Fertilizer and Citrus Packing company of Oviedo, Florida.

Nelson and Company Packing Plant and Wheeler Fertilizer Plant, 1973. This photograph was taken by Henry DeWolf in 1973 for an aerial survey of Oviedo. 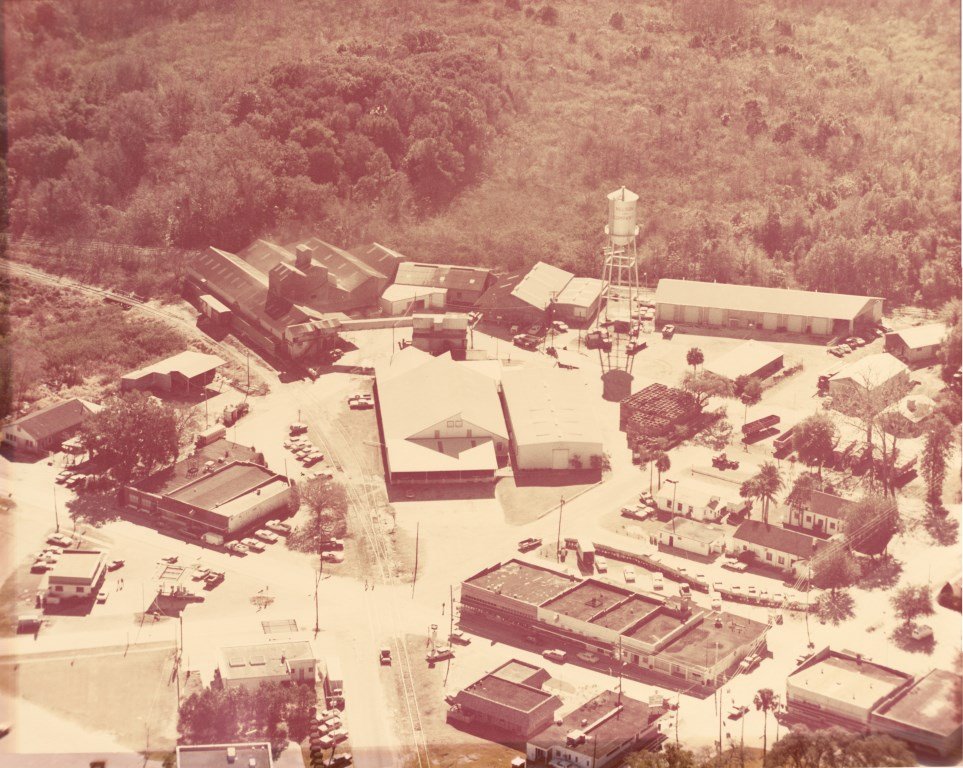 Old label that would have been put on a crate. approximate age is 1940s.

Starting in 1886 two brothers went for a big leap, they started a business together. While central Florida was quickly growing so was the citrus industry. Nelson and Gus were two young men who started a business together. Richard Adicks states that the company Nelson and Gus started was called “Nelson Brothers” and shipped their citrus under the name of “Pride of Oviedo” (62). These two brothers were important because they helped grow the agricultural industry in Oviedo.

The two brothers started off strong in the beginning as Adicks states that “They prospered for the first eight or nine years” (62). They then continued packing citrus in their packing facility in Downtown Oviedo from 1886 when they started until the 1895 freeze that had temperatures drop down to below freezing like 14 degrees in Jacksonville and 18 degrees in Tampa at stated by Adicks (45). In the same paragraph the Florida Farmer and Fruit Grower reported that there may be another Ice Age coming and that the orange business will be ruined (45). This caused the packing facility to slow down to a halt until about the year of 1908 or 1909 where joined by a business partner of the name “B.F. (Frank) Wheeler” as stated by Adicks (62). Wheeler was born in 1876 and died in 1954 (Florida Citrus Hall of Fame). Wheeler worked with the company and shared the company three way with Steen, “Captain” Bill Browning, and himself (62). As he became older he wanted sole ownership in the company as he said, “in business a man can go father and father by traveling alone” (63). This caused Wheeler to buy out “Captain” Bill Browning’s share in the company in 1913 (63). While the company was moving along during the time of 1913 to 1915-Wheeler was also looking over to buy groves. Once he bought out Steen Nelsons share in the company in 1922 he was the sole owner of Nelson Brothers, which he then incorporated the company in 1923 and it was renamed Nelson and Company (63). As Wheeler was buying up groves in 1915 he then rebuilt the packing house in 1916 making it larger to accommodate the groves Wheeler had bought to expand his business (63). Wheeler had owned many of the citrus fields in four separate counties and had shipped his citrus out of the packing facility under the new name of “Nelson and Company” with the brand name of “White Rose” (63). Business was booming for him even though it would not last, only for about two or three years until the year 1918. There was another severe freeze that caused most of the citrus plants to die off. Now Mr. Wheeler was no fool and the great freeze of 1895 had reminded him to move into other agriculture business. He then moved into growing vegetables. One very specific vegetable and that is celery (63). Wheeler’s first plots of celery were in downtown Oviedo and started the celery industry in Oviedo (63).

While B.F. Wheeler was growing his citrus and celery business with the plots of land and the packing facility he also had the Wheeler Fertilizer Company and a hardware store. What we will be focusing on next is the Wheeler Fertilizer Company since it was on the same compound was the Nelson and Company packing facility. When the “dirty thirties” came around farmers in the area were using fertilizers to keep up with demand. When this started B.F. Wheeler was buying 200-pound bags of fertilizer and storing it for later use throughout the seasons (63). Other farmers knew about his surplus of fertilizer he stored in his warehouse and would come to him and buy in small amounts (63). The local farmers came to a realization that it was more convenient to buy from Wheeler than other suppliers. They then started to place orders for larger amounts of fertilizer from Wheeler (63). When he started to make a business out of this he hired a chemist and longtime friend of his to mix the fertilizer locally, so they would not have to buy it from northerners and sell it at the same price for lower margins (63). They then started to mix in new ways that focused on the local farmers and their crops which helped their business grow (63). In 1947 the plant was completely burnt down and they then had to temporarily mix the fertilizer in Tampa and immediate supplies were brought in from Sanford while they rebuilt the mixing facility which took about six months (64).