The Birthplace of Pepsi-Cola

Around the late 1880s, soda pop was beginning to blossom all around the world. In New Bern, North Carolina, Caleb Bradham founded the soda pop Pepsi in his own pharmacy on Middle Street. This was the first step in Pepsi's long journey to becoming a multi-million dollar company, and it all started in a small town. The building still stands today, and operates exactly as it did in 1893. The shop has vintage memorabilia is on display at the Birthplace of Pepsi.

This sign is to honor Caleb Bradham and his invention of Pepsi. 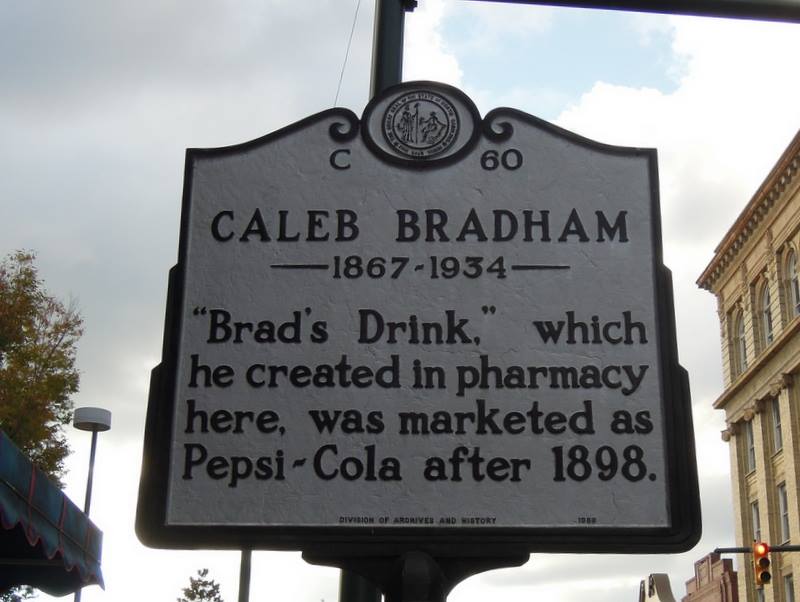 Outside view of Bradham's Pharmacy, where Pepsi was invented. 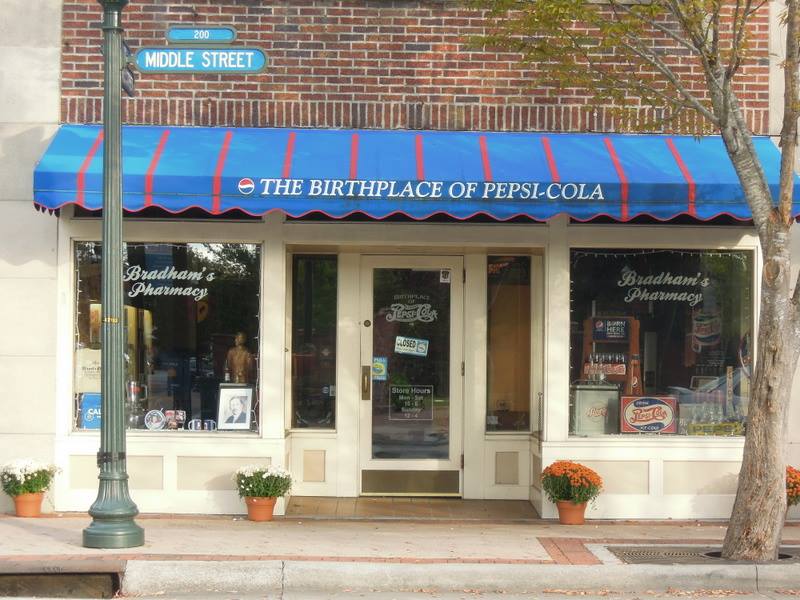 This is a variety of soda bottles and Pepsi memorabilia in Bradham's Pharmacy. 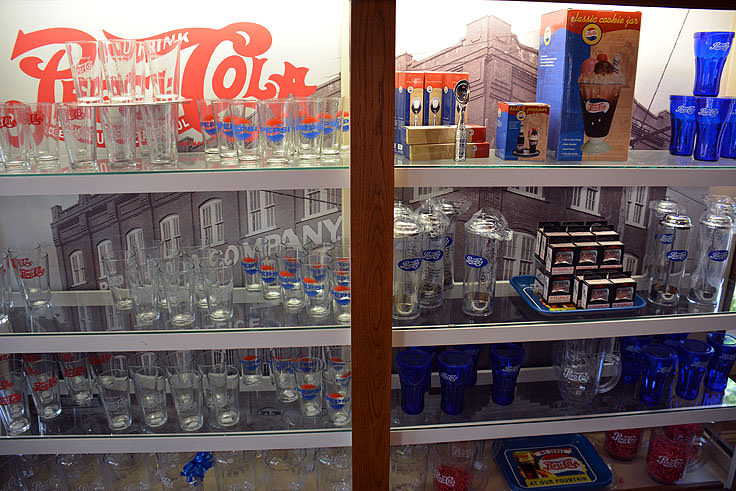 After moving back home from medical school, Caleb Bradham opened a drug store on the corner of Middle and Pollock Streets in downtown New Bern, North Carolina. Bradham's Drug Store was the very store that the well-known soda pop, Pepsi, was first made. In 1893, “Brad’s Drink” was made from a mix of sugar, water, caramel, lemon oil, nutmeg, and other natural additives. From this formula, "Brad's Drink" was a hit with not only the locals of New Bern, North Carolina, but was loved by travelers as well. A couple of years later, Caleb Bradham decided to rename "Brad's Drink" to "Pepsi," because he believed Pepsi was a healthier cola and would aid in digestion. The name Pepsi comes from the word dyspepsia, which means indigestion.

Due to a rise in popularity, the Pepsi-Cola Company was formed in 1902 with Bradham as the company's first president. As the business was growing, "Pepsi-Cola" became an official trademark in 1903. Soon after the company took off, Bradham decided in addition to selling the soda's syrup, he would start marketing Pepsi in bottles. By 1910, Pepsi had over 200 franchises in 24 different states. Sadly, due to severe rationing of sugar as a result of WWI, Pepsi-Cola Company went bankrupt May 31, 1923. The company and its assets were sold to Craven Holding Corporation for $30,000.

Pepsi was not the only soda pop invented in the late 1800s; all sorts of different pharmacists were trying to create a drink that would take the world by storm. Just a couple years earlier than Caleb Bradham, Doctor John Pemberton invented Coca-Cola in May of 1886. John Pemberton also invented Coca-Cola in a pharmacy. The name of his soft drink comes from ingredients, as well. Coca-Cola for coca leaf extract and caffeine from the kola nut. The well-known soda pop Dr. Pepper also had humble beginnings. Dr. Pepper is believed to have been invented by a pharmacist named Charles Alderton, in a small pharmacy called Morrison's Old Corner Drug Store in Waco, Texas. Pepsi, Coca-Cola, and Dr. Pepper are only a few brands of soda pop that started out in a small town drug store that are still popular today.

The rivalry between Coca-Cola and Pepsi started during the Great Depression. When the Pepsi-Cola Company went bankrupt and was sold to Craven Holding Corporation, Roy C. Megargel decided to buy the Pepsi trademark and business from Craven Holding Corporation for $35,000. Roy C. Megargel went bankrupt as well, and soon sold the company to Charles Guth, who owned a candy corporation with retail stores, and in these retail stores were soda fountains. Originally, Mr. Guth was partnered with the Coca-Cola Company, but after Coca-Cola refused to give him a discount on syrup, he decided to go with the cheaper option, Pepsi.

The soda pop Pepsi is still as popular as it was over 100 years ago. It has blossomed from a small town local drink, to a soda pop that is loved by people all over the world. The Birthplace of Pepsi “travels back in time." The store's vintage memorabilia allows a person to be surrounded with the same décor as people were in the 1880s while drinking “Brad’s Drink.”