Having been rebuilt four different times since its conception in 1812, the Columbia-Wrightsville Bridge is the longest concrete arch bridge in the world as well as being the site of a significant skirmish in the American Civil War. Union and Confederate troops clashed here in the summer of 1863 as Confederate General John B. Gordon attempted to take the bridge from the Pennsylvania militia commanded by Union Colonel Jacob G. Frick. The resulting skirmish had a lasting impact on the Battle of Gettysburg and the entire American Civil War.

The third bridge, constructed in 1968 by the Pennsylvania Railroad Company, was destroyed by flooding form the devastating Cedar Keys Hurricane. The hurricane caused widespread flooding in the region. Pictured is the submerged remains of the bridge. 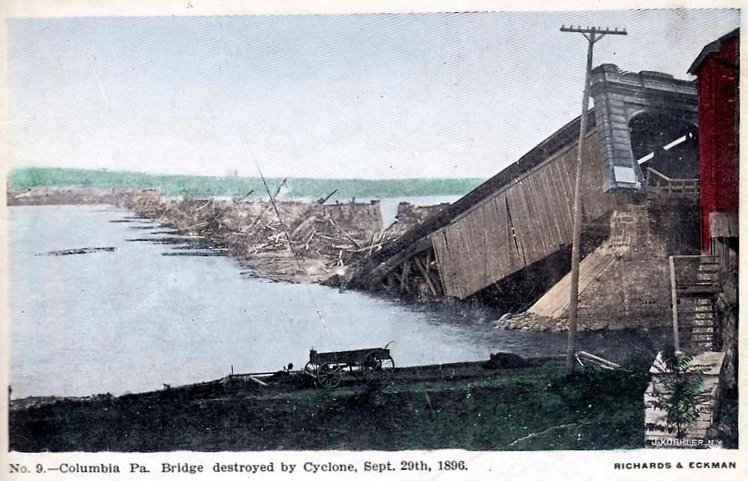 After a series of controlled explosions failed to bring down the bridge, Union troops lit the bridge ablaze. The resulting fire engulfed the mile long oak wood structure, illuminating the night sky in a "red glow' visible up to thirty miles away.

Erected in 1897, the current bridge measures 7,374 feet in length earning the title of the longest concrete arch bridge in the world. A physical and cultural staple of the region, the bridge is listed on the National Register of Historic Places. 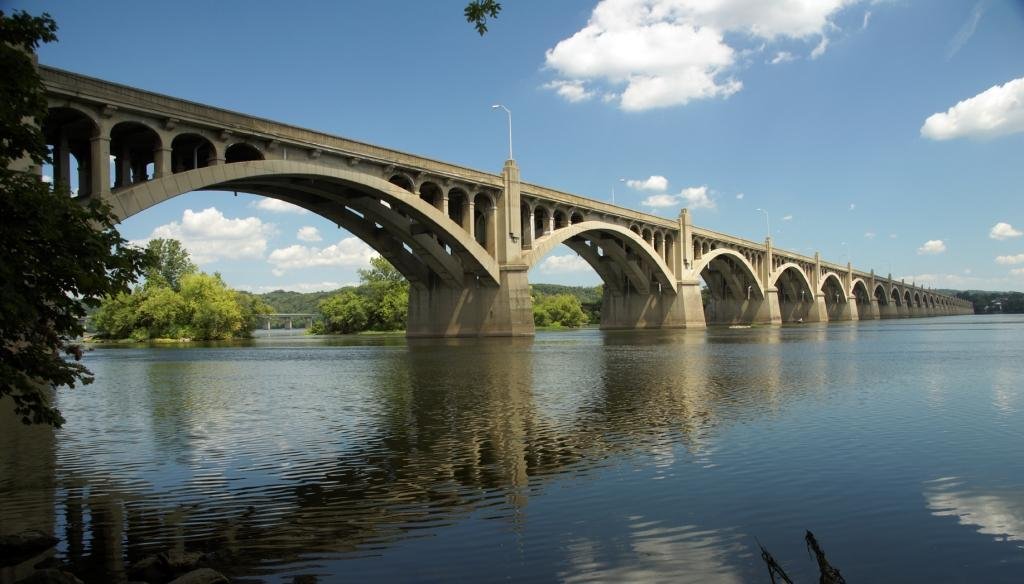 This marker, located on the West bank of the Susquehanna river in Wrightsville, details the skirmish at the bridge for passing pedestrian traffic. 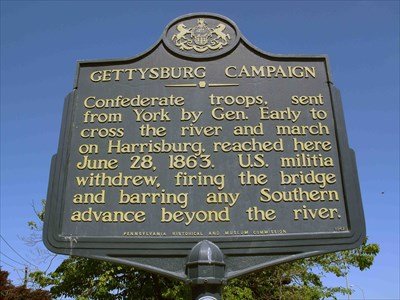 Widely considered the Unions "darkest moment", Confederates planned to march into Pennsylvania, securing two key river crossings before advancing into the heart of the North. Instead, the Rebels retreated to Gettysburg, where Union forces await. 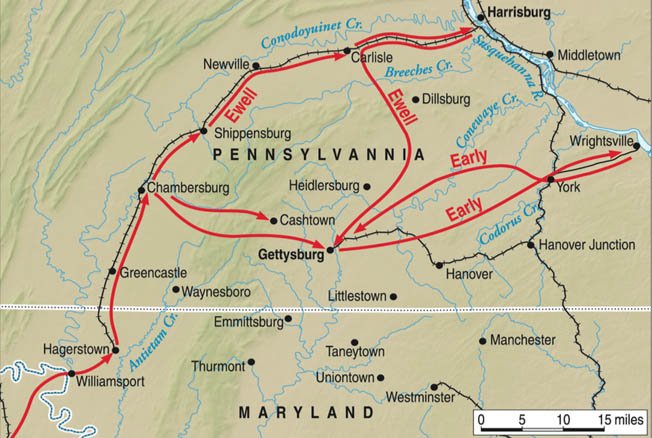 The early 1800’s saw an increase in settlers along the fertile Susquehanna Valley in south-central Pennsylvania. The river towns of Columbia and Wrightsville were hubs for industry along the windy Susquehanna river which carved its route through the valley before dumping into the Chesapeake Bay to the South.

Construction began on the first bridge to link the two towns in 1812 with construction wrapping up in 1814 making the bridge the longest covered bridge in the world. The bridge was constructed mostly of oak wood and stone and provided safe passage across the river for fourteen years before being pushed downriver by a surge of ice and storm water.

Much of the oak wood from the first bridge was salvaged and used in the construction of the second bridge beginning in 1832 and wrapping up by 1834. This bridge also earned the distinction of the longest covered bridge in the world at the time. The bridge was eventually modified in 1840 concurrent with the construction of the Wrightsville Dam in an effort to make traffic across the bridge safer. A double track railway was added sometime after 1846 but due to the fear of fire from locomotives, rail cars were pulled across by horses or mules.

The Second bridge would play a looming role in the American Civil War as the bridge was the only crossing on the Susquehanna from Harrisburg, Pennsylvania and Conowingo, Maryland making it a valuable bridge to hold if the Confederates wanted to take the War to the North.

On the afternoon of June 28th 1863, General John B. Gordon accompanied by Major General Jubal Early, marched the Confederate army through the small town of Wrightsville in an attempt to take the bridge. The Union Army was waiting, however, a Union Colonel named Jacob G. Frick had taken command of the Pennsylvania Militia and dug in at Wrightsville with 1,400 militiamen to defend the bridge.

Upon the arrival of Gordon and his Confederate Army, Frick quickly realized that his small batch of militiamen would not be able to hold off a full Confederate assault. Frick ordered his men back across the bridge to the Eastern Shore and Columbia in an attempt to detonate charges along the wooden bridge, rendering it uncrossable. The charges failed to destroy the bridge, so the Colonel ordered his men to light the bridge ablaze and burn it to the bottom of the river. The bridge, mainly constructed of oak wood went up in flames producing a tower of smoke which Confederate soldiers say was visible as far as Hanover, nearly 25 miles away.

The halt of the Confederate advance across the river had been a great victory for the Union. By preventing the Southern troops from crossing the river, they North had bought some time for General Meade and his Army of the Potomac to march North and confront the Rebels at Gettysburg. The lasting battle and series of events would eventually lead to a Union victory in the war, a lasting impact felt from the Northern defense of the Columbia-Wrightsville bridge.

A third bridge was constructed after the war in 1868; this time the operation was undertaken by the Pennsylvania Railroad Company. Built mainly with stone, wood, and steel, the third bridge was eventually taken down by the 1896 Cedar Keys Hurricane, which would pave way for the modern architectural feat that stands today.

Construction on the fourth bridge began in 1897 and took only twenty-one days; considered the fastest bridge building job in the world at the time. Consisting of twenty-eight steel arches, each 185 feet long, the Columbia-Wrightsville bridge is believed to be the longest concrete arch bridge in the world. The bridge was designed to be resistant to ice, fire, water and all the things which had taken down the bridge in the past. The train traffic across the bridge would ultimately be a significant bottleneck to the Lincoln Highway, which was completed in 1925. Eventually a fifth bridge (Veterans Memorial Bridge) was erected next to the original bridge to accommodate for pedestrian and vehicle traffic. The Original bridge and its Stone arches are still standing today and is a historic staple of the region, registered to the National Register of Historic places.