The story begins when settlers moved to the Northwestern part of Virginia where Native Americans had called home. When the settlers made a home out of the area the Native Americans began to attack them, trying to reclaim their land. In 1779 or 1778, depending on the source, a group of Native Americans attacked a settlement on Dunkard Creek. A certain settler named Elizabeth (Ann) Bozarth was amongst the men, and fought against the Native Americans who were trying to attack her cabin. This wouldn’t be her family's last encounter with Native American attacks though. Today, a marker describes the heroics of Elizabeth Bozarth, as well as the nickname she was given: the border heroine.

Sources conflict regarding the date of the event but confirm that Mrs. Bozarth saved her friend and became a hero to local residents. 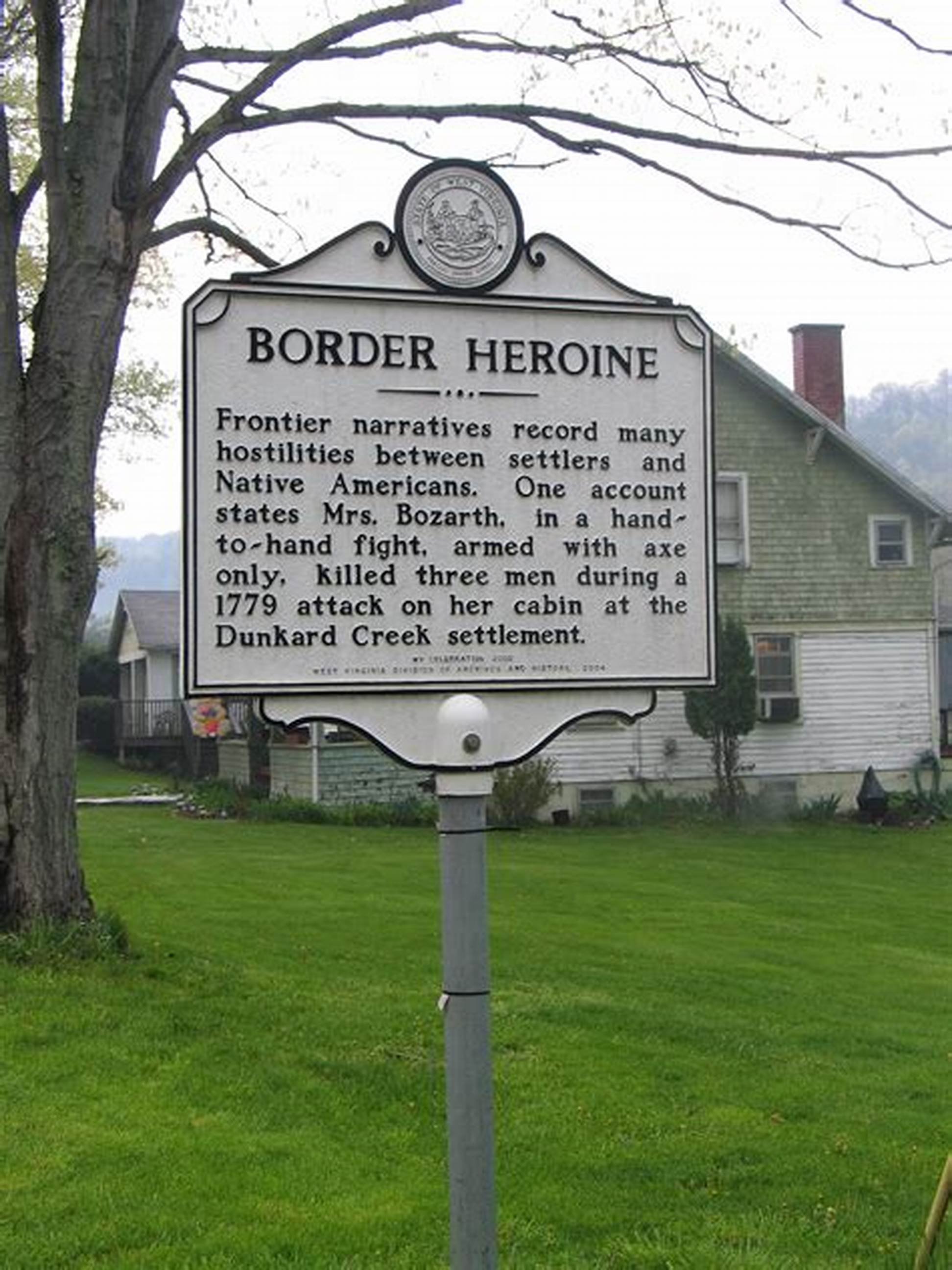 This image depicts Mrs. Bozarth defending her cabin. Most commonly called Elizabeth, some sources refer to her as "Ann" or "Experience" Bozarth. 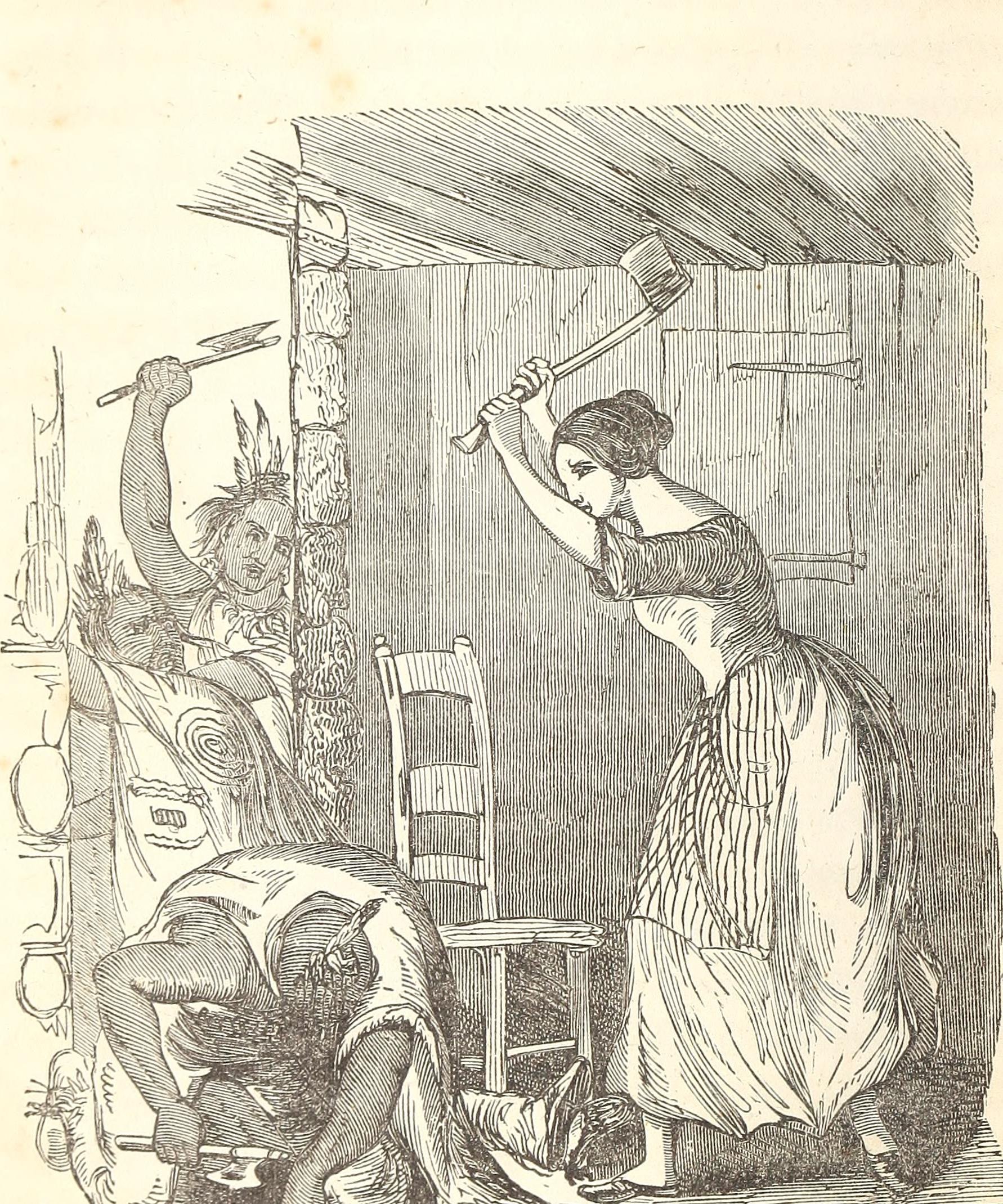 Statler’s Fort was built by John Statler in 1770 to be a safe haven for the community during Native American attacks, which were common. For example, historian Earl Core writes about an event when Native Americans ambushed eighteen settlers coming back from the fields and hunting. Most of the workers were killed and scalped except for a few who fled to the fort to warn the other men of what had happened. [1]

During the 1700s there was a disagreement over land between France and England. The fight between the French and English was motivated by the money they would receive from the land. For example, France wanted the land for trading which threatened the Native Americans and caused the French and Indian War that took place in the Appalachia region. One reason for Native American attacks was because the settlers from France or England kept stealing and threatening the Native Americans way of life.[2]

According to some sources the attack happened in 1778 instead of 1779 so, it is unclear the real year that the attacked happened. During this attack, the people in the cabin with Elizabeth were not specifically named in sources. But in one source it says, “About the middle of March last, two or three families who were afraid to stay at home, gathered to her house, and there stayed, looking on themselves to be safer than when scattered about at their own houses.” [6]

This was not the first or last of the Bozarth families encounters with hostile Native Americans. Elizabeth's father John Reger was actually referred to in another historic plaque as an “Indian fighter." As well as this attack in 1779, another attack happened further south in 1795 with her father-in-law, brother-in-law, and sister were present. A large party of Native Americans were seen on Leading Creek heading towards the settlements on the head of West Fork, those on the Buchannon River, or Tygart’s Valley. The informants gave word to settlements in that area of the possible invasion of Native Americans. John Bozarth Senior and his sons, George and John, were all working in the fields when the alarm went off. They heard wailing from a nearby home. George was young and got there before his father, and saw a Native American aiming for his son. The son fell to the ground as if dead and the Native American passed him by. The father was then attacked with a tomahawk that barely missed his head. The Native Americans eventually captured them both and they were kept as captives until the surrender of General Wayne.[7]   This attack, according to sources, is the last Native American attack in Virginia.

Since we get many of our stories in history from white men, we usually only see it from the perspective that whites were the heroes fighting the “savages.” The Bozarth family did protect themselves and others from people who were trying to harm them, but the Native Americans had a version of the story as well. Nonetheless, Elizabeth was a brave woman during her time and was fighting with an axe before women were able to legally participate in war. Her story should be remembered as the first woman in this area who fought for herself and others.

Kercheval, Samuel. A History of the Valley of Virginia. Winchester, 1833.