St. Boniface Catholic Church was founded in 1836. According to the Archdiocese of Louisville, the church is the second oldest Catholic parish established in Louisville, Kentucky. The church was named after St. Boniface, the patron saint of Germany. Announcements in the church were written in German until 1920. At that time, the board of trustees chose to permanently conduct sermons and send announcements in English only, a reflection of the changes in the community and congregation. Many of the historic artifacts that can be viewed by visitors and members of this church edifice were brought over from the original church and many are from Italy and Munich. Walking tours are available before and after mass on Sunday mornings.

The front of the church. 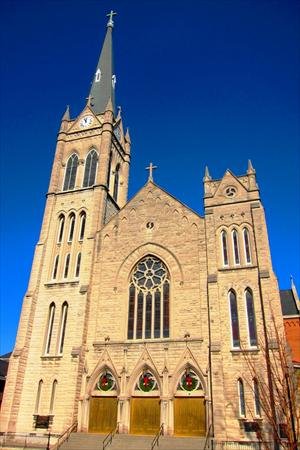 The inside of the parish. 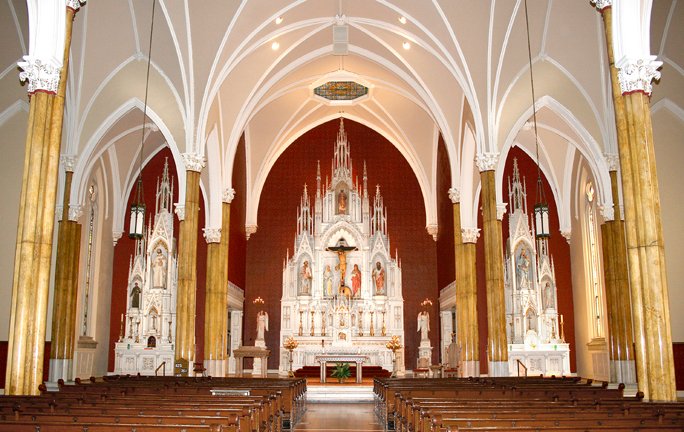 Early immigration to Kentucky and the Louisville area was largely dominated by Scottish, Irish, and English groups. During the early 1800s when slavery was still being cruelly practiced, many West African groups were forced to migrate with their owners to the city. Early German immigrants began to move into the city, many coming down from other existing German towns in Pennsylvania and Maryland. These early groups in Louisville led to the founding of St. Boniface in 1836, the first German Catholic Church established in the city. The church was built to serve Catholic parishioners immigrating to Louisville. After 1848, German and Irish immigration increased dramatically in Louisville, due to famine and political unrest in their home countries. Due to the increase of Catholic communities immigrating to Louisville, St. Boniface’s original building became too small to host all the new guests. St. Boniface received permission to build it’s new, current building in 1898. The old building stood where the parking lot next to the church is located today. The church was added to the National Register of Historic Places in 1982.

Catholics have been recorded immigrating to Kentucky since the 1770s, but it wasn’t until the late 1700’s-early 1800s that larger groups of Catholic communities began immigrating into the state. The Diocese was created in 1808, originally known as the Roman Catholic Diocese of Bardstown. The Diocese moved from Bardstown to Louisville in 1841, then was granted Archdiocese of Louisville in 1937. Catholicism in Louisville hasn’t always had positive times. Anti-Catholicism was seen throughout Louisville and Kentucky, leading to Bloody Monday on August 6, 1855. Protestant mobs attacked Irish and German Catholic neighborhoods, leading to the deaths of twenty-two people. The attacks were politically driven and a reflection of the rise of the Know-Nothing Party. Members of the Know-Nothings were hostile to recent immigrants and members of the Catholic faith. The violence drove many Catholic immigrants away from Louisville, with many moving to Cincinnati and St. Louis. Louisville continues to have a large Catholic population while the surrounding area is primarily Protestant.