Moneta J. Sleet Jr. was the first African- American to win a Pulitzer Prize for Feature Photography in 1969. His prize-winning photograph featured a forlorn Coretta Scoot King holding her five-year-daughter at the funeral of her husband, and civil rights icon Martin Luther King Jr. Sleet Jr. was employed as a longtime press photographer for Ebony magazine where he often depicted the African-American struggle for civil rights during the 1950s and 1960s.

This marker commemorates Moneta Sleet who believed in the power of photography, a force that could raise the American consciousness of racial prejudice in the country. 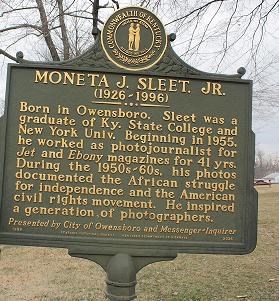 Moneta J. Sleet Jr. was born in Owensboro, Kentucky on February 14th, 1924. Sleet Jr. is said to have developed a love for photography from the moment he received a box camera as a young child.  While attending Kentucky State College as a business major, Sleet Jr. obtains a job as an assistant for a commercial studio where his passion for photography was reignited.

Moneta Sleet would eventually obtain a master’s degree in journalism from New York State University. In 1955, Sleet joined Ebony, a Black-owned magazine based in Chicago. One of his first assignments was to follow a young political organizer named Dr. Martin Luther King.