This historical marker commemorates the discovery of oil in Tulsa County. Just under a half mile to the west of the marker, in a community called Red Fork, two Pennsylvania oil drillers—John S. Wick and Jesse A. Heydrick —struck oil in June 1901 (the very first discovery in the state occurred in 1897 in Bartlesville). They proceeded to build the first oil well in the county. Known as the Red Fork Gusher, the well was found in the heart of the Creek Indian Nation territory. Although the oil well only produced ten barrels per day, it brought a lot of attention to the Red Fork and Tulsa. The population in Tulsa increased substantially, as workers and their families arrived to work in the oil fields. In time, Tulsa would earn the nickname "Oil Capital of the world." 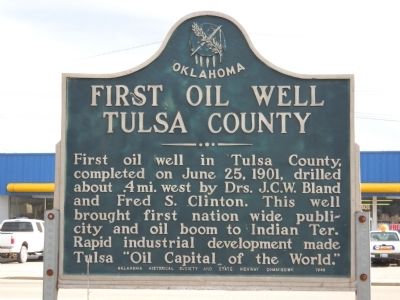 Funding for the well's construction came from two local doctors, John C.W. Bland and Fred S. Clinton. John Bland's wife, Sue, was a Creek Indian and owned the land on which the oil well stood. As such, the oil well was called the Sue A. Bland No. 1. In the coming years, other oil fields were discovered, including the Glenn Pool oil field, which was one of the biggest ever to be found and made Oklahoma a national leader in oil production.