The Cambridge Common is a 16-acre space just north of Harvard Square in Cambridge, MA that is currently used as a public park. Established in 1630, the Common has evolved over the centuries and has served a myriad of purposes for residents of both Cambridge and the Greater Boston area. Initially a communal cow pasture, the land has also hosted militia training and is famously the site on which George Washington took command of the Continental Army on July 3, 1775. The Common includes grassy areas for recreation, benches, paths, various memorials, and a playground. The park is operated by the City of Cambridge, and it is designated as a National Historic Landmark.

This photo, taken in 1874 by William Notman & Son, shows the grassy expanse of the Common and the Soldiers’ Memorial in the background. Source: HVD - Images (used with permission) 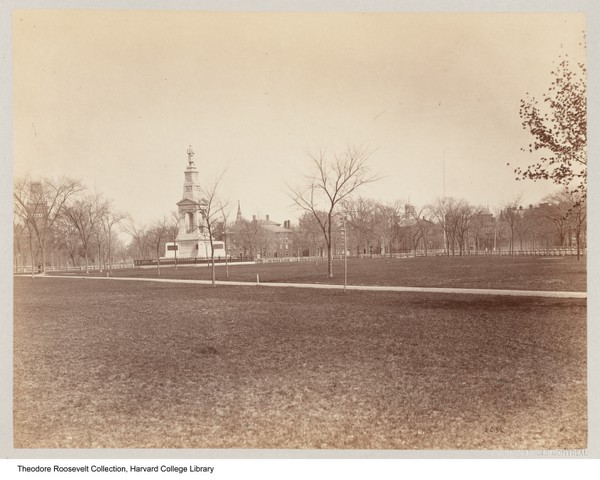 Produced in 1781, this map of the Cambridge Common and the area surrounding it exemplifies how the park has served as a crossroads for travelers in Cambridge, as the main detail present is the park's paths. Source: HVD - Images (used with permission) 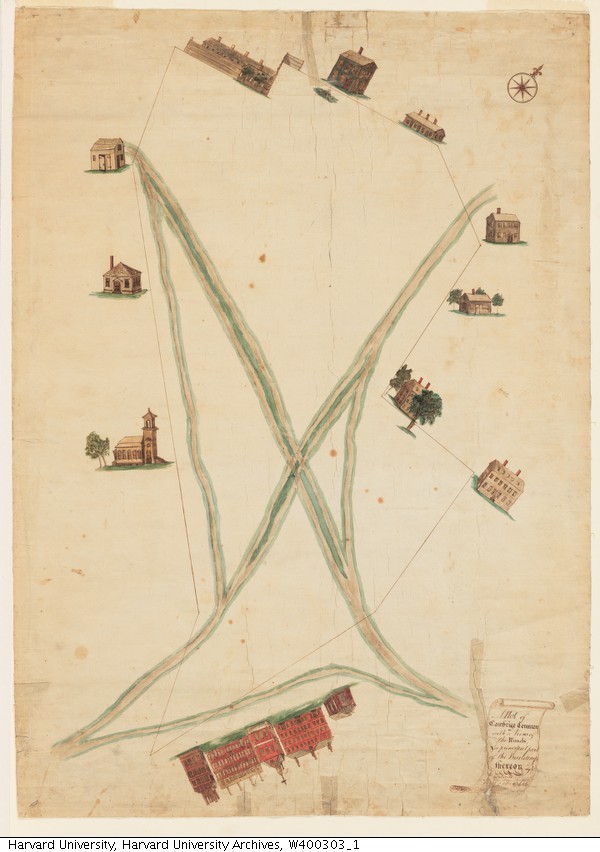 Adjacent to Garden St., there is a cluster of three British-made cannons. They were placed in the park in 1875 and 1876 as a way to commemorate the centennial of the American Revolution. Source: City of Cambridge website (public domain) 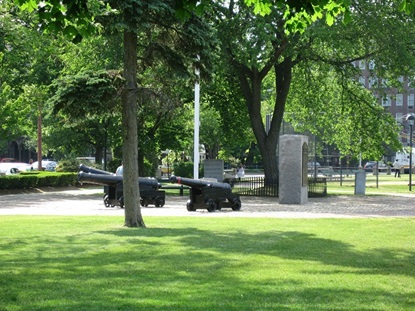 The Common includes the Alexander W. Kemp Playground, which was redesigned and reopened in 2009. Source: City of Cambridge website (public domain) 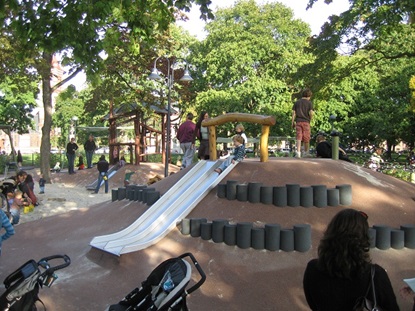 Over the years, the area encompassing the Common and the uses of said space have changed drastically. In 1642, the Massachusetts bay colony measured approximately 30 miles by 20 miles, and accordingly much of the land even relatively near the shoreline was not settled. At the time of Harvard University’s first Commencement in 1642, “Wolves still prowled what is present-day Cambridge Common. Beyond what is now Linnaean Street was a howling wilderness, a Grimm Brothers gloom hovering at the edge of fairy-tale Harvard.”3 Once the Puritans had razed more of this wilderness to make more room for their settlement, the Common extended several blocks further north (up to what is now Linnaean St.). This layout was conducive to the farming techniques of the era, which prioritized large tracts of undivided land.

As the centuries wore on, this land ownership dynamic shifted to one in which most of the land that was previously designated as public was sold off for private use. In 1724, the park had been reduced to 16 acres, which is its size to this day. In the mid-20th century, local developers and the City Council discussed ideas ranging from parking garage to a 15-story building, but none of the projects came to fruition. The garage proposal failed in 1972, and despite City Council support for the 15-story building, Governor John Volpe vetoed the proposed sale of part of the Common.4

Following the Battle of Lexington and Concord in the Revolutionary War, militias camped on Cambridge Common in order to congregate and receive their next orders. George Washington allegedly gained control of the Continental Army while standing under an elm tree in the Common. The tree is no longer standing, but there is a plaque commemorating the event near the intersection of Mason and Garden streets. There was likewise a military presence on the Common during World War I when the U.S. Navy occupied the space to use as a radio school, complete with 13 barracks and classroom buildings.4

In 1830, the Common began to take the shape that it embodies today. The enclosing and landscaping of the park was in part due to raucous and disruptive festivities that happened on the land in the early 19th century, some of which were related to Harvard’s Commencement exercises. For instance, James Russell Lowell describes the presence of “peep shows, at One cent each” in his Fireside Travels.4

In the period following the Civil War, the Common began to be utilized as a civic space, as a number of monuments and memorials cropped up around the park. The Soldiers Monument—built in 1870—honors the 346 men from Cambridge who died in the Civil War. Several years later, in 1875 and 1876, a trio of cannons were placed in the park to commemorate the United States’ victory in the Revolutionary War one century prior. In 1904, the Daughters of the Revolution advanced the idea of constructing a triumphal arch, which was eventually erected in 1906.4 Most recently, the Cambridge Irish Famine Memorial was dedicated on July 23, 1997.5

In the late 1960s, Cambridge Common became a gathering place for “disaffected youth,” mirroring in some ways the use of the land in the 1820s. Loud outdoor concerts, combined with a prevalence of crime such as drug use and vandalism, brought upon proposals to ban the concerts; instead, however, the city reorganized the Common to allow such gatherings to continue.4

Today, it is a leisure space and a crossroads for people traveling in and around Harvard Square on foot or on bicycles. It is estimated that “over 10,000 pedestrians and cyclists use the paths and sidewalks on a daily basis.” On the Waterhouse St. side, there is a playground which includes both physical and mental activities for young children.2 There are paths that crisscross the Common; today, they are simply paths by which people cross the park, but they used to represent crucial highways. These routes became increasingly popular at the turn of the 19th century after the construction of the West Boston Bridge, Craigie’s Bridge, and the Concord Turnpike.4