First registered as a commercial establishment in 1835, Johnson Mill is believed to be the oldest business in Arkansas. Partially burned by Confederate troops following the nearby Battle of Pea Ridge in 1862, the mill was refurbished after the war and functioned as an operating mill well into the 20th century. In 1992, the mill reopened as a unique hotel facility, noted for its fascinating blend of historic and modern architecture. Also here is a historic home called the Johnson House, which was built in 1882. Both the house and mill listed, together, on the National Register of Historic Places.

The Johnson Mill was converted into a hotel in the early 1990s. The mill and the nearby house are listed on the National Register of Historic Places. 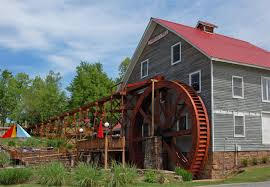