This historical marker outside of the Upshur County Courthouse is part of the West Virginia Civil War Trails Historical Markers series and shares the history of the courthouse during the war. Buckhannon residents generally supported the Union even prior to West Virginia's statehood, and the courthouse served as a storehouse and armory for Union soldiers. As a result, the courthouse was the center of Confederate raider Albert Gallatin Jenkins and his devastating 1862 raid. During that raid, Jenkins and his men outnumbered and captured the Union defenders of Buckhannon on August 30, 1862. Jenkins' raiders captured the soldiers along with supplies, horses, and weapons and destroyed provisions in a large bonfire outside the courthouse the following day. Jenkins left the town and continued to riad neighboring communities, including riads in Pennsylvania in 1863 where Jenkins and his men captured and sold free people of color into slavery. After Jenkins and his men left, the courthouse again served armory and storehouse for Union soldiers. Owing to the disruption of the war and the damage to the courthouse resulting from using it as an armory, Buckhannon leaders requested that the Union soldiers and supplies be placed somewhere else in the final months of the war when the danger of Confederate raiders had long passed.

The marker giving detailed description of the raid at the courthouse. 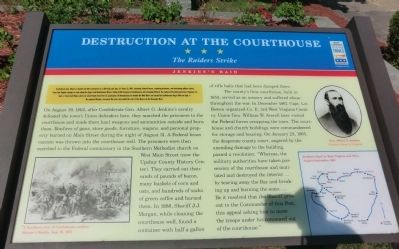 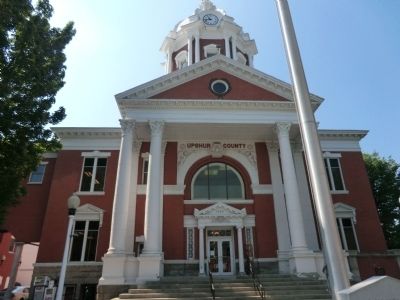 The marker includes a map of Jenkins' 1862 riad 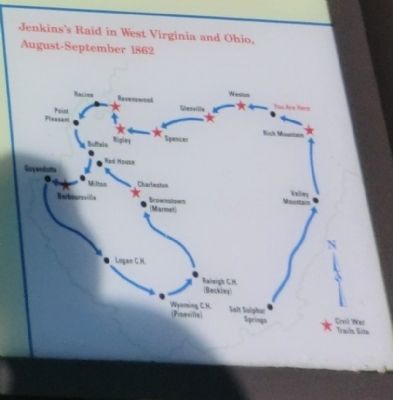 The courthouse was built in 1855 and still serves as the Upshur County courthouse today. Buckhannon was home to a community that stayed loyal to the Union, making it an ideal place for a small Union garrison. Jenkins and his 550 cavalrymen made a point of attacking small garrisons like this as a way of stealing supplies and harming the Union war effort at the same time.

While Jenkins raided many areas over his 500-mile stretch, the courthouse was one of this biggest prizes. The raiders attacked stores and the hospital as well before riding away in order to avoid facing a Union force of equal or greater size. Jenkins' success as a raider depended upon speed, and he frequently rode his men away from even the slightest rumor of a sizeable Union force. While this tactic won Jenkins few admirers, even among Confederate officers who distrusted him, avoiding a pitched battle was key to the success of his five hundred mile raid. It also led to Jenkins' failure to support Lee's army in the days leading up the Battle of Gettysburg.

While Jenkins is notorious for his decision to capture and sell free people of color in Pennsylvania in 1863, he is also known for his forbearance to white civilians. For example, Jenkins ordered his men to not destroy the property of families other than stealing horses and he did not condone attacks on white women and children alone or private homes. Jenkins remained in Buckhannon for several days after the attack and gave a speech at the courthouse on September 4th, 1862.