The Harris-Kearney House was built in 1855 by early settlers John and Henrietta Harris. They were notable in the Westport community for operating a successful tavern, the Harris House Hotel, which served many visitors traveling on the Santa Fe Trail. The home was in the midst of the Battle of Westport during the Civil War and used as headquarters for the Union Army. The Greek Revival style house is the oldest remaining brick home in Kansas City. It serves as the headquarters of the Westport Historical Society which was formed in the 1950s. The Society offers tours of the building along with other historical sites throughout the area. It also operates a local history library and special events, evening lectures, and dinners. The house was added to the National Register of Historic Places in 1972. 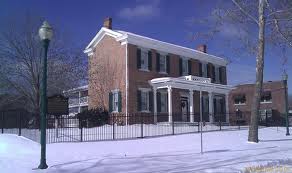 Paul Kirkman, The Battle of Westport: Missouri's Great Confederate Raid-click the link below for more information about this book 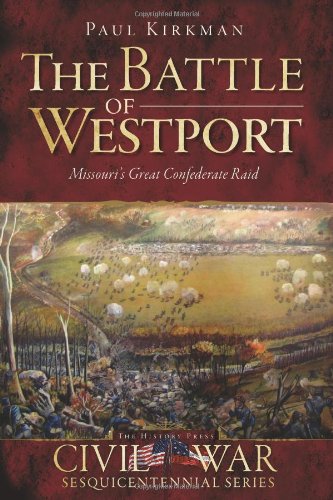 Col. John Harris, his wife Henrietta, and their children moved from Kentucky to Missouri in 1832. They were among the first white settlers of what became the town of Westport. Before the Civil War, Westport was a major transportation center. Three overland westward trails (the Oregon, California, and Santa Fe) ran through the community. Originally the Harris family owned a large farm. Around 1847, John acquired the McGee Tavern and operated it as the Harris House Hotel until 1864. The hotel was quite popular, and was patronized by many traders, trappers, and settlers traveling along the Santa Fe Trail.

In 1855, Harris built a new house to replace the smaller, log cabin his family occupied when they first came to Westport. The two-story, Greek Revival style brick structure was located on a five-acre plot at the intersection of Main Street and Westport Road. It was constructed largely by enslaved African Americans; they even produced bricks for the house onsite. The Harris Home was easily one of the most prominent residences in the community and was referred to by locals as the “Mansion House.” After Harris’ death in 1874, the house passed to his son-in-law, Col. Charles E. Kearney. Kearney was a very successful Kansas City businessman. He invested in real estate, operated grocery stores, served as an executive of the Burlington Railway, and helped construct the city’s Hannibal Bridge.

After the Harris-Kearney family, the house changed hands a few times. At one point it was owned by Kansas City Star editors Thomas and Maude Johnston. In the early 1920s, the fate of the home was threatened by new commercial development in the neighborhood. To save it from demolition, locals formed the Harris Home Association and purchased the house in 1922. They moved it one block away to its current location on Baltimore Avenue and opened it as a historic house museum in December of that year. The museum proved an unsustainable venture and closed by the late 1920s. For the next several decades, various owners used the house as a commercial building. It housed, among other things, a doctor’s office, a law firm, a photography studio, and an advertising agency.

In 1976, the Westport Historical Society took over the house and restored part of it to its original 1855 appearance. Today it once again operates as a house museum, highlighting the pre-Civil War history of Westport and Kansas City. One notable artifact on display is the oldest residential piano in Kansas City. The building also serves as the Westport Historical Society’s headquarters, and contains a visitor’s center and meeting space.

In 2018, a plaque was installed at the house commemorating one of the home’s occupants: Harriet “Hattie” Drisdom. Hattie was a slave purchased as a young girl by Charles Kearney in 1855. Allegedly, he did so to prevent her from being sold somewhere else. Two years later, Kearney freed Hattie, but she chose to stay at the house and work for the family as a paid housekeeper. When she died in 1927, Hattie became the first African American buried in the “White Only” section of Kansas City’s Union Hill Cemetery.

Call for hours or a personal tour