A gift from the University of North Carolina's graduating class of 2002, this Black granite and bronze monument commemorates the free people of color and enslaved laborers who built many of the university's first structures. The monument was created by sculptor Do-Ho Suh and dedicated on November 5, 2005, at McCorkle Place on the University of North Carolina at Chapel Hill campus. The monument depicts a table held up by 300 bronze figures who depict the free and enslaved persons who built buildings and worked to operate the university in its early decades. 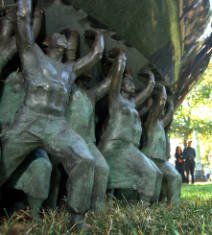 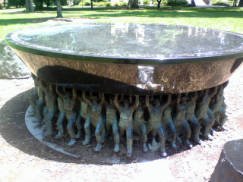 This monument was intended to serve as a reminder of the contributions made by the free and enslaved African Americans to the University of North Carolina and the state of Carolina. The artist and many of the students who worked to create this monument hoped it would be located in a prominent location. They also feared that placement near the larger monument of Silent Sam would overshadow this monument. University administrators selected this location and hoped that this monument would end the controversy around Silent Sam by "offsetting" that monument which honored students who were killed in the Civil War but also celebrated the university's connection to the Confederacy. As part of this desire to quell the Silent Sam controversy, the university selected this location. The decision was criticized by many as the monument is partly concealed by the nearby the trees, pathways, and benches.

The monument was installed on May 11, 2005. The monument was dedicated on November 5, 2005 at McCorkle Place on the University of North Carolina campus. Even though the artist wanted the monument placed in a different location, the monument was ultimately placed near the Silent Sam Confederate monument. After discovering Silent Sam's dedication speech which celebrated violence against people of color, and after years of inaction to petitions and protests of the monument, a group of students removed that monument on August 20, 2018.