Now home to Alumni Fields of Tufts University, this was once the location of the clay pits of the College Hill Brickyard. Historically, brickmaking was one of Medford's major industries, along with shipbuilding and rum distilleries--two industries connected to the plantation economies of South America and the Caribbean. The College Hill Brickyard was started in the early nineteenth century by John Buzzell and was later operated by John S. Maxwell and his son William. 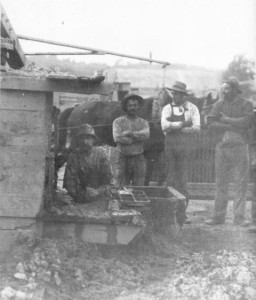 The owner of the brickyard led a nativist mob in the destruction of a nearby convent in 1834. 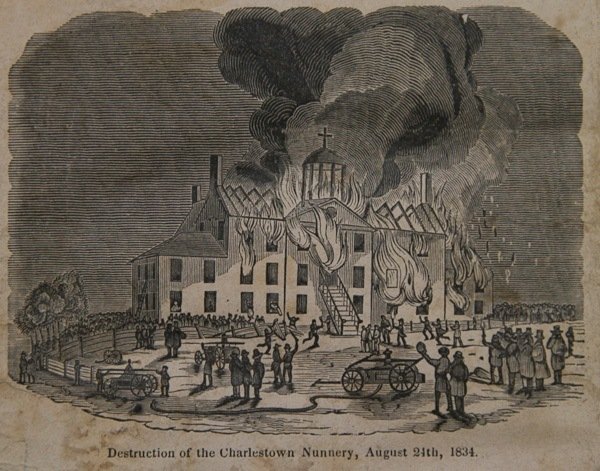 Brickmaking in Medford
When Medford was settled in the seventeenth century, good quality clay was found in abundance. One of the earliest residents, Thomas Eames, was a bricklayer who arrived sometime before 1652, taking on an apprentice, Joseph Mirrible, who learned to make brick from Eames. Others such as Joseph Squire, Thomas and Caleb Brooks, Francis Shedd, Thomas Bradshaw, Sylvanus Blanchard, William H. Casey, Nathan Adams, and five members of the Tufts family began businesses in the same trade.

From 1650-1750, brickmaking became the largest industry in Medford. Medford bricks were high quality and were quickly in demand. From the small town of Medford, bricks were shipped via the Mystic River to Boston and distributed throughout the colonies. Both Eames and, later, Thomas Brooks worked the same land in West Medford as brickyards, while Caleb Brooks' yard was near the second Meeting House. The area near the Royall House held some of the earliest clay pits in the city. Old Medford High School on Forest Street sits on land which was once the 18th-century brickyard of Stephen Willis, Jr., and the Fountain Yards extended along Fulton Street from Forest to the Maiden Line. Winter Hill, the Weir Bridge, and the Tufts' Sodom Yards on the south bank of the Mystic River were also sites of brickworks. In the 19th century, the Massachusetts Brick Company, the New England Brick Company, and the Bay State Brick Company were established.

Among these businesses was the College Hill Brickyard, at the base of Tufts University and with clay pits at today's Alumni Fields. According to a 1906 history compiled by the city of Medford, the yard was once operated by John Buzzell and Son. Later, it was run by John Russell and Son, then by John S. Maxwell and his son William (who preceded his father in death in 1900) into the early twentieth century.

Much of the labor force for the brickyards came from seasonal migrant or immigrant workers. The Bay State brickyards hired mainly French Canadian workers who lived in tight quarters along Linden Street, Locust Street, and Hall Avenue. Laborers worked from spring to fall, digging and piling clay throughout the summer. The clay was "weathered" through the winter and watered the following spring, which made it more pliable. Workers also kneaded the clay the way grapes are crushed for wine-making. Oxen and horses were used to turn the pug mill, which forced clay through an opening to mold the brick. On the other side, workers cut the clay to standard sizes. Early on, the bricks were dried in the sun, but later were baked in wood-fired kilns for twelve nights and days, requiring workers to feed the fires throughout the night. One kiln could produce a million and a half bricks in a single firing (5).

The last of Medford's brickyards (The New England Brick Company) closed in 1930, and the clay pits left behind filled in with water and debris. After several children drowned in abandoned clay pits, they were refilled and built over with parks, houses, shopping centers and, in the case of College Hill Brickyard, an athletic field.

John Buzzell and the Know-Nothing Riot of 1834

The first owner of College Hill Brickyard is more well-known for his role in an 1834 anti-Irish Know Nothing riot. Buzzell was originally from New Hampshire, but was making bricks in Medford, Massachusetts by the time the Ursuline convent in Charlestown (now part of Somerville) was attacked by members of the Know-Nothings, a short-lived political party based on opposition to immigration and ethnic diversity. The Know-Nothings chased Sister Mary and other Ursuline leaders but the women bravely returned and continued their work.

When the members of the convent returned, the anti-Catholic locals formed a second mob and attacked the in August of 1834. The midnight attack known as the Know-Nothing Riot of 1834 resulted in the destruction of convent property and a fire that destroyed the chapel and outbuildings. The violence also forced the nuns and students to evacuate.

One of the leaders of the mob was brickyard owner John Buzzell who broke into a tomb where he later claimed to have seen the dead body of Sister Mary. This was unlikely as Sister Mary testified against him during the trial that ensued. Buzzell and seven others were arrested, but despite overwhelming evidence against Buzzell, the jury acquitted him. After the trial, Buzzell returned to New Hampshire.