This historical marker was dedicated in 1957 and shares the story of a Revolutionary soldier and planter who also served as a religious leader in this community after the war. Like most men in the American colonies, Dan Tucker sought landownership and economic opportunity. While many of the area's successful plantation owners were lukewarm in support of the Patriot cause and some supported England, Tucker took up arms in support of independence. After the way, Reverend Dan Tucker established a ferry, operated a small plantation, and ministered to free and enslaved Georgians with evening religious services. He moved west to Elbert County, Georgia, where he earned a reputation for singing to congregants that led to stories of his religious services that were passed down as oral history through songs such as "Old Dan Tucker." Today, Tucker is recognized by this historical marker.

This historical marker was dedicated in 1957. 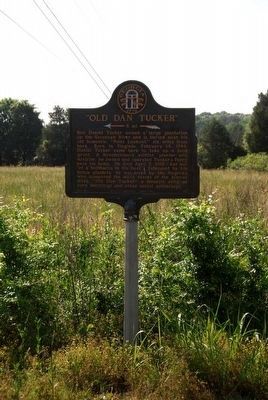 Reverend Dan Tucker served in the American Revolution and like many soldiers, he moved west to secure land. He established a small plantation in Elbert County, Georgia, that grew and was known for his capacity as a singer and as a minister of the gospel. Oral histories about the songs he shared led to the song "Old Dan Tucker" which was sung by many and has even been covered by musicians such as Bruce Springsteen. The historical marker reflects the era when it was dedicated with the assertion that Tucker was "beloved by the Negroes." While Tucker might have been regarded as a "kind master," it is important to note that enslaved persons often masked their feelings as part of their strategy of self-preservation.