This monument commemorates the life of Old Drum, a dog who soon became Warrensburg Missouri's most famous resident. Old Drum was tragically killed on October 28, 1869, when the beloved pet became the victim of mistaken identity. Leonidas Hornsby mistook Old Drum as the perpetrator of several attacks on his cattle. The error led Hornsby's assistant to fire his gun and kill the beloved canine. Old Drum's owner, Charles Burden, could not accept the killing as a mere accident and took his neighbor to court. The trial took place across the street at the former courthouse, and the case of Burden v. Hornsby attracted national attention when attorney George Vest decided to offer a eulogy to Old Drum as his closing argument. Dog lovers throughout the nation were moved to tears by the tribute to "man's best friend," a phrase Vest used to artfully describe the unimpeachable loyalty between Old Drum and his bereaved owner. (The video at the bottom of the page is a full episode of a popular 1964 television program that dramatized the story of the court case. You can fast forward to the 20-minute mark to hear George Vest's famous eulogy).

The Warrensburg Chamber of Commerce erected this monument in 1958 to honor of Old Drum and the famous Missouri court case that resulted from his tragic death. 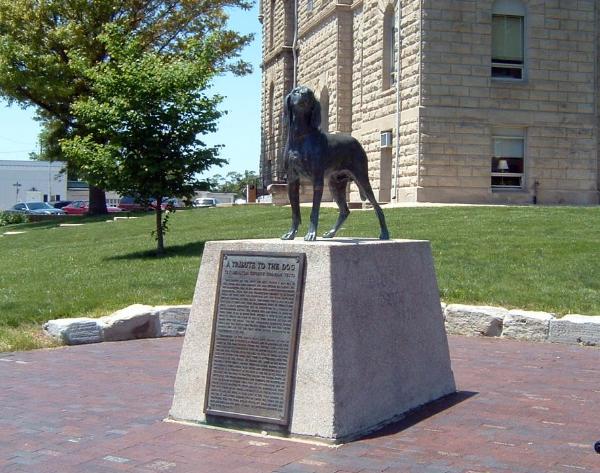 Attorney George Graham Vest delivered the famous line "Man's Best Friend" in his closing arguments. The speech was performed by several actors, including Ronald Reagan in Death Valley Days: "Tribute to the Dog" (1964). 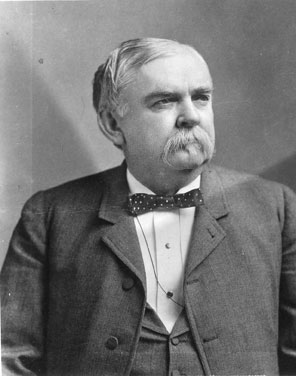 Fred Ford built this monument in 1947, using money and small stones sent from dog-lovers across the globe.The monument was placed near the location where Old Drum was killed. Unfortunately, the base of the monument was vandalized. 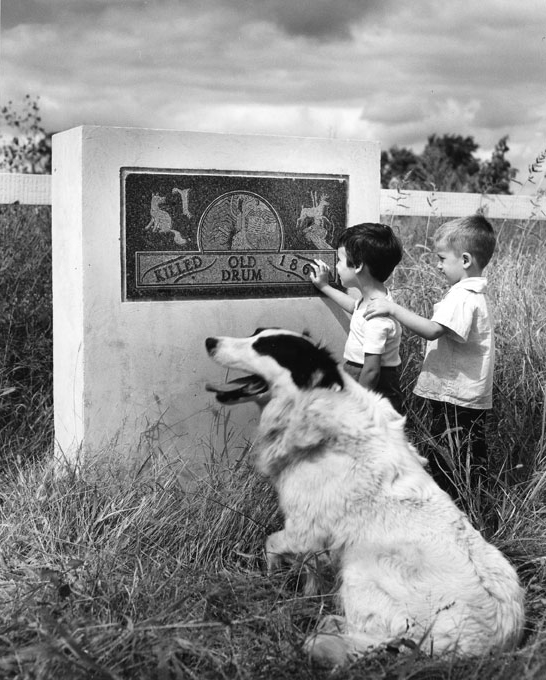 Now known as the "Old Johnson County Courthouse," this building served as the County seat from 1842 to 1871 and was the location of the trial. 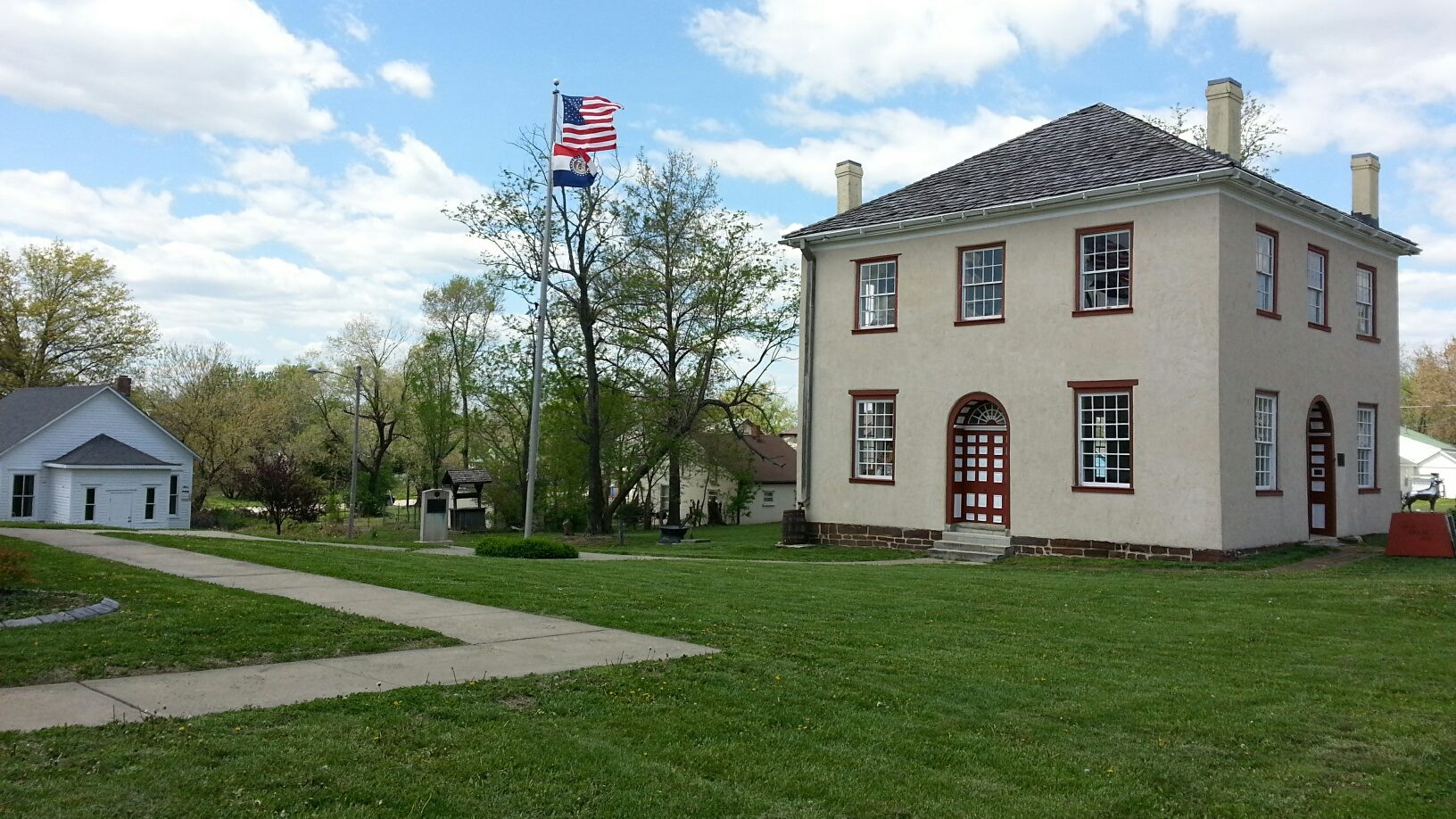 The story of Old Drum regained the national spotlight during the 1940s. This attention led to a campaign to raise funds to create a monument which was located near the location where the dog had been killed. Dog lovers from several continents sent stones that were used in the base of the monument. Unfortunately, that monument fell victim to vandalism and decay. Those who wish to view the location of the original monument and place where Old Drum was killed should look at the link to the Old Drum Tour at the bottom of this page.

This second monument was dedicated in 1958 and located on the lawn of the current courthouse and just across the street from the historic Old Johnson County Courthouse where the trial was held in 1870. The former courthouse (302 Main St) is now home to the Johnson County Historical Society.

The trials included several appeals and featured some of Missouri's most famous Civil War officers as attorneys for both sides. One of the attorneys, David Nation, is most famous for being the husband of legendary temperance advocate Carrie A. Nation.

Vest may be best remembered for his eulogy of Old Drum, but his first court case may have been the most historically significant. Vest agreed to defend an enslaved woman who was accused of murder in Georgetown, Missouri. Vest proved the woman's innocence, but could not save her from an angry mob who lynched the woman after the trial. Members of the mob apparently warned Vest that he could share the same fate if he remained in the area. Rather than leaving Missouri, which had been his original intention, Vest decided to remain in the region and built his law practice in Boonville.

Vest was certainly not an abolitionist, in fact, he supported secession and actually wrote the resolution calling for a state convention to consider leaving the Union. When Missouri rejected secession, Vest decided to fight for the South and would later serve in the Confederate Congress. His pro-Southern record would come back to haunt him in 1876 when he was defeated in his bid to become governor of Missouri.

Gentlemen of the jury, the best friend a man has in this world may turn against him and become his enemy. His son or daughter whom he has reared with loving care may prove ungrateful. Those who are nearest and dearest to us—those whom we trust with our happiness and good name—may become traitors in their faith. The money that a man has he may lose. It flies away from him, perhaps when he needs it most. A man's reputation may be sacrificed in a moment of ill-considered action. The people who are prone to fall on their knees to do us honor when success is with us may be the first to throw the stone of malice when failure settles its cloud upon our heads. The one absolute, unselfish friend that man can have in this selfish world—the one that never proves ungrateful or treacherous—is his dog.

Gentlemen of the jury, a man's dog stands by him in prosperity and poverty, in health and sickness. He will sleep on the cold ground, where the wintry winds blow, and the snow drives fiercely, if only he can be near his master's side. He will kiss the hand that has no food to offer; he will lick the wounds and sores that come in encounter with the roughness of the world. He guards the sleep of his pauper master as if he were a prince. When all other friends desert, he remains. When riches take wings and reputation falls to pieces, he is as constant in his love as the sun in its journey through the heavens.

If fortune drives the master forth an outcast in the world, friendless and homeless, the faithful dog asks no higher privilege than that of accompanying him to guard against danger, to fight against his enemies. And when the last scene of all comes, and death takes the master in its embrace, and his body is laid away in the cold ground, no matter if all other friends pursue their way, there by his graveside will the noble dog be found, his head between his paws, his eyes sad but open in alert watchfulness, faithful and true even to death.