This historical marker demonstrates the violence that occurred between Native Peoples and American settlers during the War of 1812. As part of their effort to hold the interior of North America against the advancing American settlers, the British allied with Native tribes during the war. Josiah Francis, also known as Francis the Prophet and his Native name Hillis Hadjo was a religious leader of the Red Stick Creek. According to the historian Frank Owsley, Francis the Prophet became “the most ardent advocate of war" against the encroaching settlers. During the war, Francis attacked settlers, including an attack near this historical marker that ended with twelve settlers being killed. 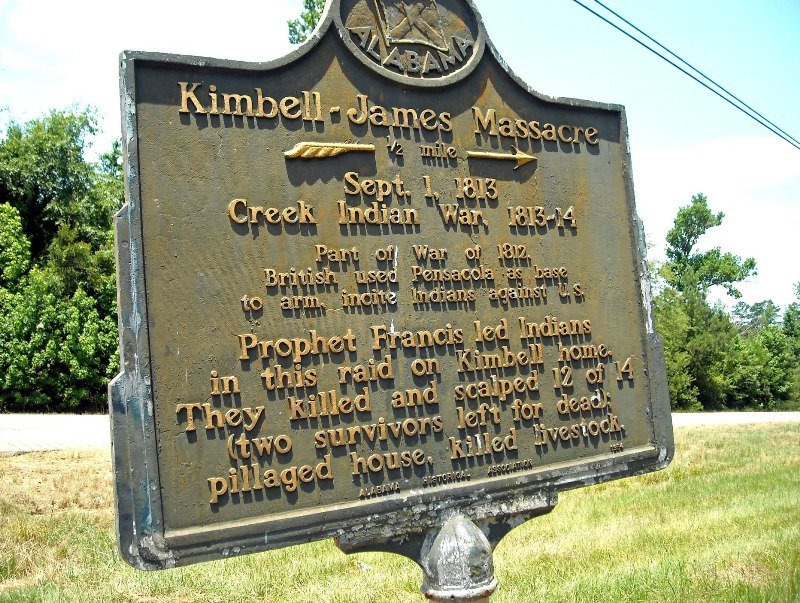 Leading up to the outbreak of war between Britain and the United States, Creek Indians agreed to support the British in return for a promise that England would support the tribe in their quest to recover their lost lands and drive out the remaining American settlers. The Creek Nation split in half, however, and some members of the tribe wished to avoid the conflict between the two colonizing powers. A coalition of Creek known as the Red Sticks opposed the American settlers and attacked their settlements destroying crops and domestic animals.

The first attack of the Creek Indians happened at the Battle of Burnt Corn, when the American settlers ambushed the Red Sticks on July 23, 1813, to prevent the Creek from securing a supply of food, supplies, and arms from the Spanish. These supplies included 45 barrels of corn and flour, blankets, ribbons, scissors, razors, and one thousand pounds of gunpowder along with lead musket balls and birdshot. Colonel Caller and Major Daniel Beasley of the Mississippi Volunteers led a force of six companies to intercept the shipment.

The Red Sticks decided to retaliate on August 30, 1813 and attacked Fort Mims. The Indians had massacred over two hundred people and this is known as the Fort Mims Massacre. After the Fort Mims Massacre, many settlers moved to the safety of Fort Sinquefield. In August, that stockade had become so crowded that the families of Ransom Kimbell and James Abner decided to move to Kimbell’s spacious plantation two miles from the fort.

On the night of August 31, 1813, Mary James, the daughter of Abner James, and young Isham Kimbell were up late taking care of a sick family member and observed the sounds of their dogs barking. The next morning instead of taking precautionary measures and heading back to Fort Sinquefield, the family disregarded the potential warning sign. On September 1, 1813, the Kimbell plantation was attacked by Creek led by Josiah Francis.

Ransom Kimbell was not at home and Abner James was able to save his son Thomas and daughter Mary as they fled to Fort Sinquefield. However, twelve residents of the plantation were killed. Sarah Merrill, the daughter of James Abner, and her infant son were struck down by the attackers. Sarah Merrill was scalped and bleeding heavily but crawled her way to Fort Sinquefield. She left her son in a hollow log went and was able to describe the location to men at the fort who located and saved the boy. Ransom Kimbell did not live long after the attacks and died at Fort Madison. Isham Kimbell lived to become an important part of Clarke County, he became the clerk of the Circuit Court.