Dispatch Rider of the American Revolution

The "Dispatch Rider of the American Revolution," a nine foot tall bronze statue with a granite base, was sculpted by Francis Edwin Elwell (1858-1922), and presides over the Old Burying Ground in Orange. The handsome figure, clad in a belted coat and flowing cape, holds a tri-corner hat in his left hand and cradles a dispatch packet in his right arm. He also carries a pistol and sword. Local patriotic societies commissioned this work in conjunction with the town's 1907 centennial celebration. The burial ground, which was attached to the now defunct First Presbyterian Church in Orange, contains dozens of eighteenth century gravestones, including those of many Revolutionary War veterans. Orange had been a hotbed of patriotic sentiment during the Revolution, and many descendants of eighteenth century families still lived in town during the early twentieth century. Elwell, who had served as Curator of Ancient and Modern Sculpture at the Metropolitan Museum of Art in New York between 1903 and 1905, had several prominent commissions throughout his lifetime. 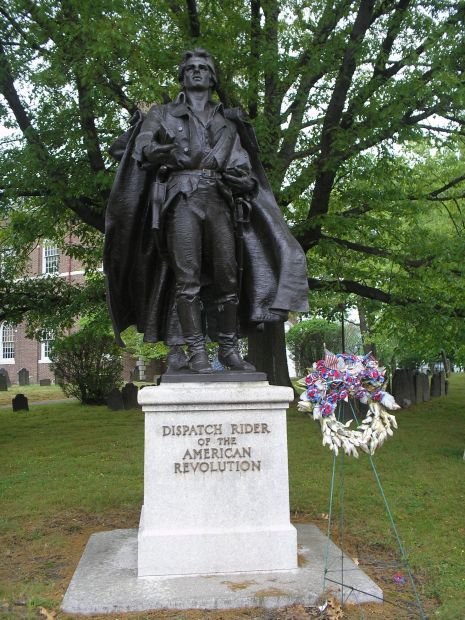 The “Dispatch Rider of the American Revolution,” which was dedicated in 1907, is a nine-foot-high bronze statue with a granite base that measures approximately 36” x 32” x 32”.  A plaque affixed to the base reads: “This statue was dedicated Friday June 14th 1907, Centennial of first town meeting  of Orange, also the 130th anniversary of the adoption of the Stars and Stripes as our national emblem in memory of the men and women of this community who assisted in establishing American Independence.”   The statue is located in the northeast corner of the Old Burial Ground in Orange, originally associated with the First Presbyterian Church, which was founded in 1719 and closed its doors in 2010.  The eighteenth century burial ground fell into disuse around 1840 as Orange urbanized and burial space became scarce.  Presbyterians established the park-like Rosedale Cemetery in nearby Montclair and removed many graves there, re-interring their ancestors.  The Orange burial ground still contains dozens of eighteenth-century stones, including those of early pastors and Revolutionary War veterans.1

In the early twentieth century, as Orange planned for the 1907 centennial of its incorporation, prominent citizens dedicated themselves to restoring the burial ground, straightening headstones, clearing the terrain, planting trees and shrubbery, laying out new paths, and removing the considerable evidence of vandalism and decay.  As a capstone project, they decided to commission a sculpture that would honor the congregation’s Revolutionary commitments and pay tribute to their own ancestors.  Local chapters of the Sons of the American Revolution and Daughters of the American Revolution led this effort, forming a Revolutionary Monument Association in 1905 to oversee the project.   The association held an anonymous competition to select a design for the monument, employing William J. Baer (1860-1941), perhaps the most distinguished miniature painter of his day and a member of nearby Montclair’s art colony, as a project consultant.   Baer ultimately recommended the “Dispatch Rider of the American Revolution” design as most appropriate for the project.

Francis Edwin Elwell (1858-1922), a prominent sculptor with studios in Weehawken, New Jersey, had submitted this model and followed through on the project.  Elwell had been born in Concord, Massachusetts, the great-grandson of a Minuteman who fought in the famous battle at Concord Bridge.  After being orphaned at age four, he was adopted by Louisa May Alcott, a neighbor who also introduced him to sculpture.  Advanced studies took him to the Museum of Fine Arts in Boston and the Ecole des Beaux-Arts in Paris, after which he crafted a distinguished career in the field.  He exhibited at the Columbian Exposition (1893) and the Pan American Exhibition (1901).  His works remain prominent in venues ranging from the United States Senate to the Art Institute of Chicago to the Gettysburg battlefield.  From 1903 to 1905, Elwell served as Curator of Ancient and Modern Statuary at the Metropolitan Museum of Art in New York City.  He was unceremoniously fired from this position, however, after a well-publicized dispute with the acting director and thereafter worked out of his studio in Weehawken on private projects.2

Theodore Dreiser, who profiled Elwell in an 1898 New York Times article, described him as a “sculptor poet” whose compositions appeared “fair and delicate, lightened with spirit and grace, and in every way beautiful as things to look at and to think about.”3  The “Dispatch Rider of the American Revolution” certainly testifies to this tribute.  The rider projects a noble and intensely masculine image, towering over the cemetery and its surrounding urban landscape.  Though tools of war – a pistol and sword – dangle from his waist, the dispatch rider also cradles a packet of communiques in his right arm and holds a tri-cornered hat in his right hand.  Elwell thus incorporated a variety of standard Revolutionary images into his creation.  The piece is also noteworthy for its textured and flowing cape, beautifully belted tailcoat, and strapped boots.  The dedication occurred in several stages.  Elwell modeled the statue at his Weehawken studios, prepared a plaster cast in 1906, and sent it to the Gorham foundry in Providence, Rhode Island, where the bronze casting took place.  Orange residents turned out in large numbers on a rainy day in April 1907 to lay the cornerstone, stuffing it with historical documents and standard time capsule memorabilia.  The statue itself was dedicated in a massive public ceremony on June 14, 1907.  The association optimistically enthused that now “the men and women of the great construction period of our community life and of the national life are to be remembered by the people at the opening of the twentieth century, who look forward fervently and hopefully to the great influence for public good that the statue will have.”4