Built at the site where enslaved persons were imprisoned prior to being auctioned in the 19th century, this museum offers exhibits that share the history and legacy of the domestic slave trade, as well as post-slavery issues related to racial inequality. The museum follows the history of enslavement and shows its connection to lynching, the convict lease system, segregation, economic inequality, and the persistence of racial discrimination. The museum is located at the site of a former "slave jail," a holding space between the docks where enslaved persons entered the city and the market where families were separated and auctioned prior to the end of chattel slavery in 1865. In recognition of the fact that Alabama had the second-largest enslaved population of any U.S. state, the museum includes a variety of exhibits that investigate the role of Montgomery and Alabama in the domestic slave trade and the legacy of enslavement.

What visitors will see when they step inside the museum. 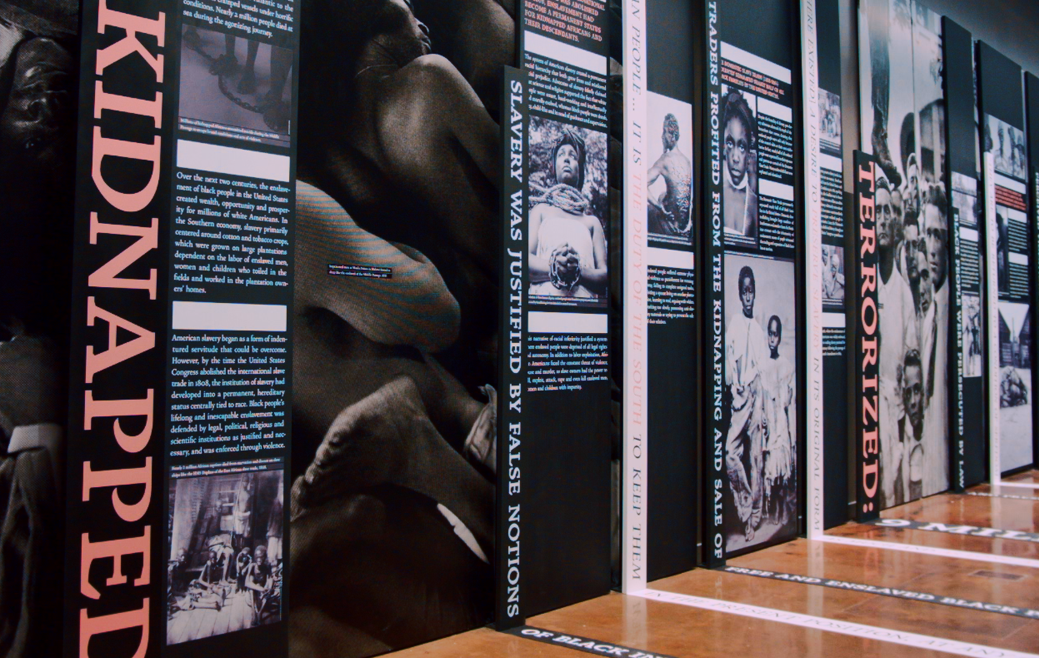 The Legacy Museum: From Enslavement to Mass Incarceration opened to the public on April 26th, 2018. It is an 11,000 square-foot space in which visitors can be educated on the evolution of slavery and racial segregation. This is done through the various collections of the Equal Justice Institute's critically acclaimed research materials, which include videography, visuals, and exhibits. Visitors are able to hear, see, and get a feel of what it was like to be a slave waiting to be auctioned off at a block. The museum also contains exhibits on lynching, and its relationship to contemporary issues regarding racial injustice.

In 1808, the U.S Congress abolished the International (also known as the Atlantic) slave trade in which Africans were kidnapped from their homes and shipped across the Atlantic Ocean where they faced horrendous conditions. Since the beginning of the colonization of American in the 17th Century, there was a demand for servants, which would evolve into the system of slavery that would continue for centuries as the economic system would become dependent on forced labor.

When the Domestic slave trade began in the 19th Century, the rise of cotton and the invention of the cotton gin increased the demand for slave labor in the Lower South. For the next fifty years, up until 1860, slaves from the Upper South (in states such as Virginia) would be forcibly removed from their plantations and embark on a long, hard journey to the Lower South (in states such as Alabama). Slaves would have to travel in large chained groups, known as coffles, while marching for hundreds of miles, making the trip slow and tiring. Beginning in the 1840’s slaves were able to travel by steamboat and train which would take them to depots and warehouses where they would be auctioned off.

Alabama would have one of the largest slave populations at the start of the Civil War since it had grown into one of the most prominent slave trading communities. Because the Alabama state legislature banned free Black people from entering and residing in the state, enslavement was the only legal status for African Americans during the time. After the slaves would arrive in Montgomery after their long journey, they would be placed in warehouses where they would have to wait to be auctioned off. The slaves would also be held captive in depots, which Montgomery had four of, as much as they had banks and hotels. The slave trade would continue to operate until 1864.

The Equal Justice Initiative (EJI), a private nonprofit organization founded in 1989, continues to strive to challenge racial injustice, discrimination, and poverty. They acknowledge that slavery was a truly upsetting and horrific part of America’s history and this was one of their reason for creation of the Legacy Museum. They realize that not that many people understand and recognize its impact, and why people of color continue to be disadvantaged and mistreated today.