In 1913, Muskingum College acquired the land surrounding a small stream just north of the small campus. Seeking to enhance the natural beauty of the campus and to provide a site for student recreation, President Montgomery ordered the construciton of an earthen dam to create a College Lake, which was open to the Muskingum community in 1915. Over the next several decades, the College Lake became a focal point for the campus and the site of many student activities. A small gazebo that juts out into the lake on its eastern end, affectionately known as the Spoonholder, has been the site of many marriage proposals over the last century. 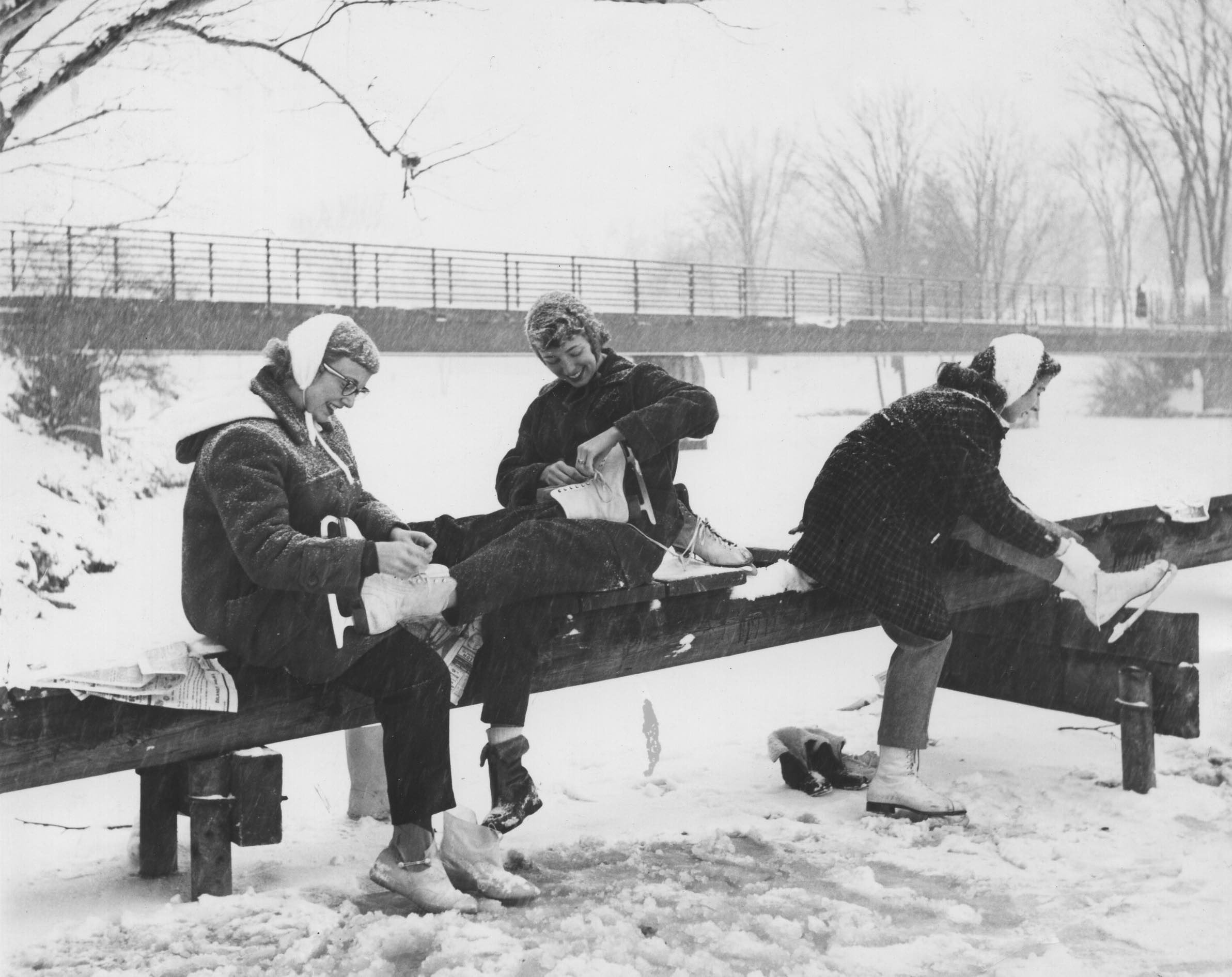 Muskingum students jumping off the Spoonholder into the lake

View of the College Lake from the Southeast. Patton Hall, the original women's dormitory, is visible on the hill north of the Lake. 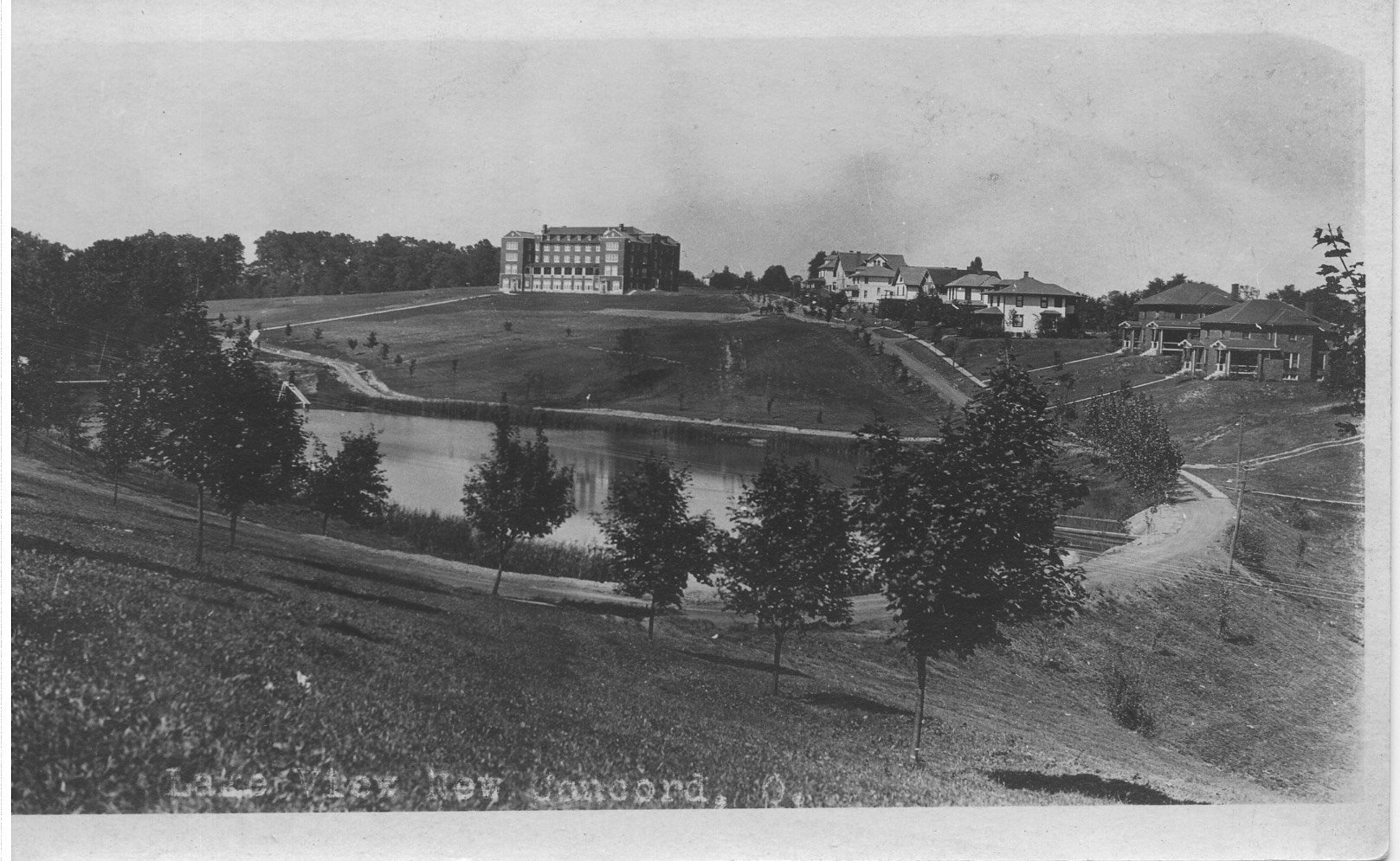 A wooden diving board once provided opportunities for student use in their leisure time.

Students enjoying their time on the lake with swimming and boating. View from the western side of the Lake. 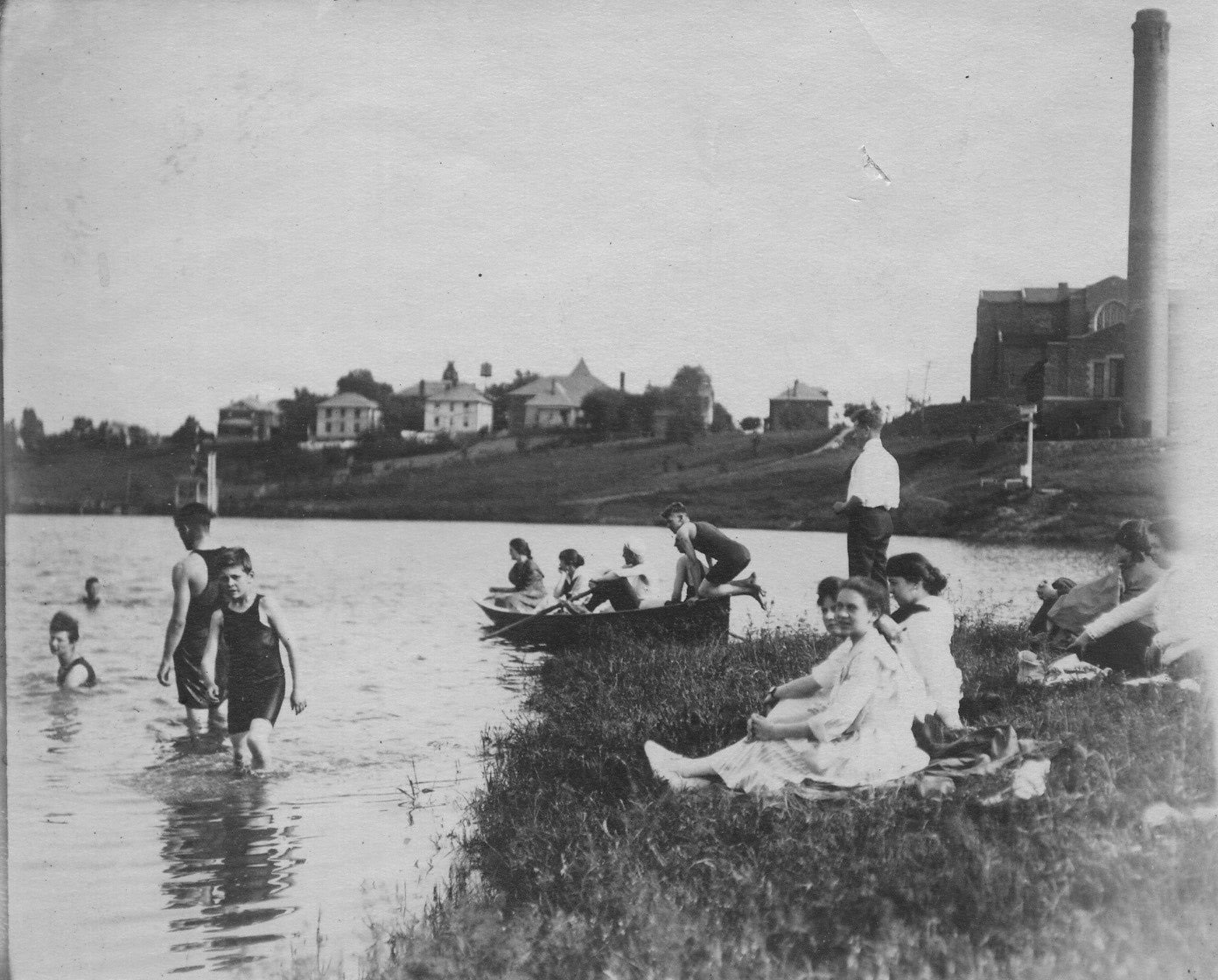 Tug of war tournament on Scrap Day, taking place at the College Lake

The College Lake in 1985 after it had been drained the Spoonholder was temporarily removed and rebuilt. 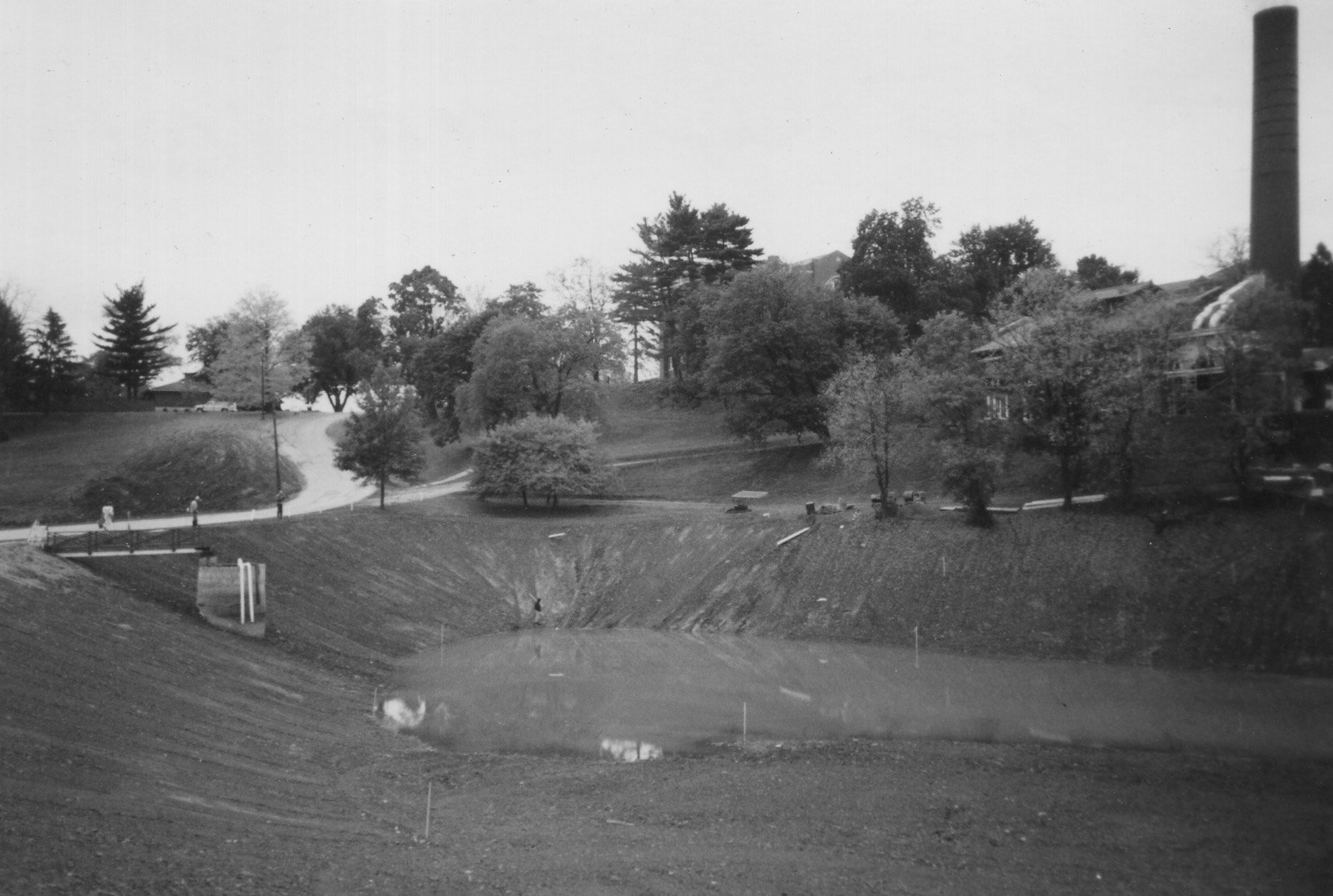 Muskies enjoying a swim in the lake 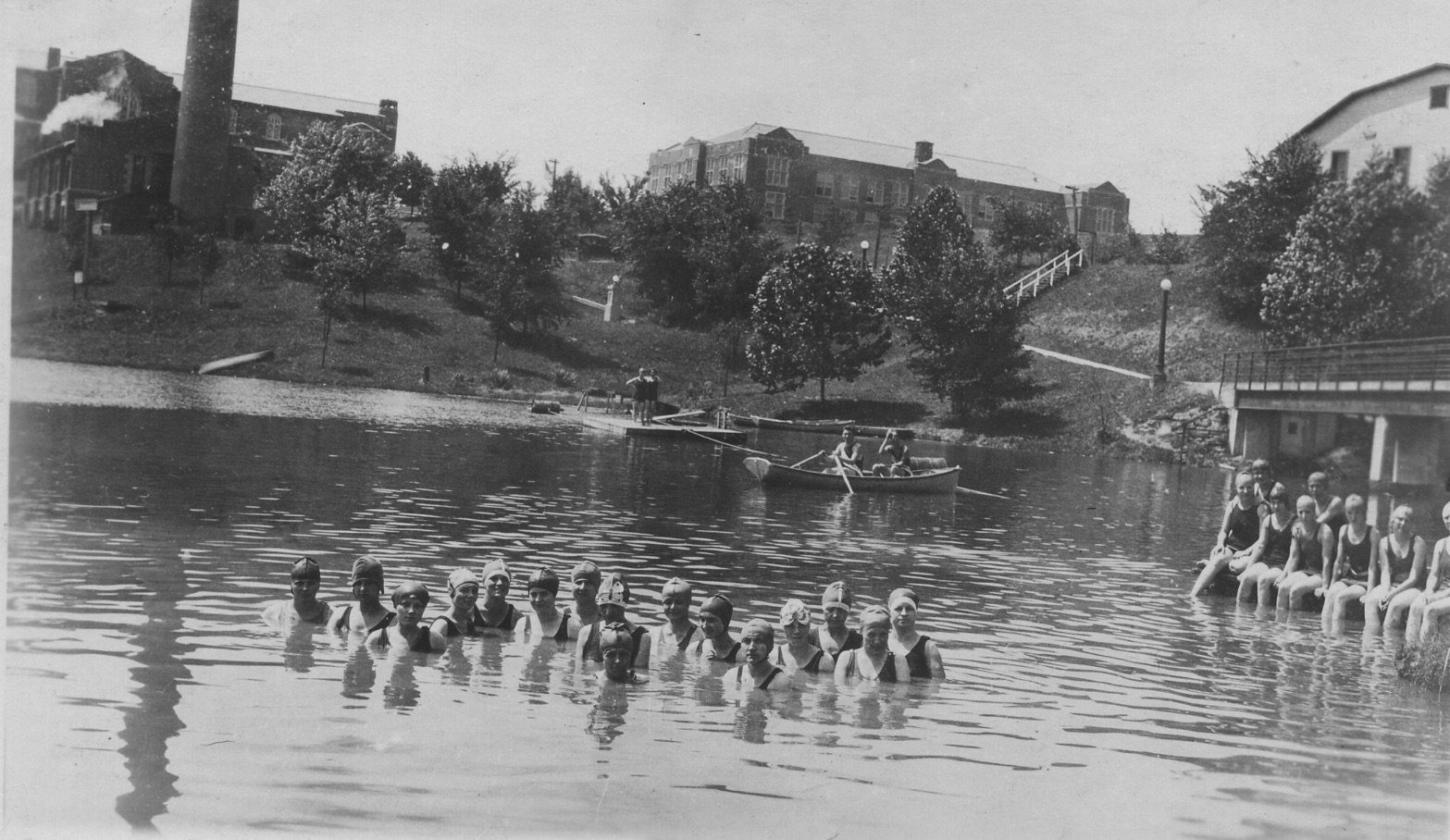 When Muskingum College President J. Knox Montgomery acquired an additional eleven acres of hilltop and valley on the northwest edge of the tiny campus in 1913, he promised to “build for the ages." Those critical acres would eventually emerge as the core of the campus, and include Brown Chapel, the Power Plant, and one of the University's most notable features, the College Lake.

The College Lake has also been the focal point of campus urban legends, including one that claimed that John Glenn (astronaut and Senator) accidentally drove his car into the lake while a student, and that the car still resided in its depths. According to faculty member Ken Blood, when the College drained and dredged the Lake in 1985, the entire community of New Concord came to watch the draining, anticipating the recovery of the legendary American astronaut's car.  Alas, the draining of the lake proved the story to be false, as no car appeared at the bottom of the lake; just an immense amount of silt. Ken Blood remembered the dredging and refilling of the lake taking “approximately 4 or 5 months”; not including the process of restocking the fish population. Professor Blood described the experience of the lake draining as an exciting experience for the entire New Concord community.

The gazebo known as the Spoonholder, located on the eastern end of the College Lake, holds a romantic history for the Muskingum University community. Campus legend holds that if a couple share a kiss on three separate occasions at the Spoonholder, they will end up marrying each other. This Muskingum story has been around for decades and is still told to the new incoming classes of Muskies. The Spoonholder has also been the site of marriage proposals throughout the years.