A Creek village, Standing Peachtree (which many believe took its name from an Indian peach tree or orchard, but which may have been a corruption of pitch tree (referring to a pine), was located near where Peachtree Creek empties into the Chattahoochee River. A network of Indian trails lead to this village, an important trading center. Walter G. Cooper, in his "Official History of Fulton County" (1934) quotes an article by Eugene Mitchell in Bulletin No. 2 of the Atlanta Historical Society (1928): "To the Standing Peachtree led a network of Indian trails before the white man came. It was the terminus of the Peachtree trail and the Stone Mountain trail and one of the objectives of the Sandtown trail. The Peachtree Trail ran along the top of the Chattahoochee ridge from near Toccoa to Buckhead, where it divided; one branch continuing by way of what is now called the Pace's Ferry and Moore's Mill roads to Standing Peachtree; but the other branch led southward from Buckhead across Peachtree Creek and struck the Sandtown trail at Five Points in what is now Atlanta.” 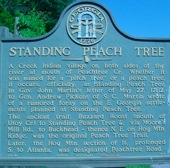 During the War of 1812, the state of Georgia built a series of forts to control the Creeks, who were allied with the British against the United States. These outposts included Fort Peachtree at Standing Peachtree and Fort Daniel at Hog Mountain in what is now Gwinnett County. A road was built connecting these forts and was know as Peachtree Road. Today it is called Old Peachtree Road.
So the name "Peachtree" -- so closely associated with Atlanta that it is almost a municipal trademark -- is actually older than the city itself. And today's Peachtree Road had its beginnings as an important Creek trail.
Rev. William Jasper Cotter, who came to the area in 1812 with his father, who was a trader, and described it in his autobiography:
"...all was new -- waters in the creeks and rivers as clear as crystal; rich valleys, hills, and mountains covered with a thick forest; a land of beautiful flowers -- white, pink, yellow, and red honeysuckles, redwood and dogwood blossoms, wild roses and other beauties. There was plenty of wild game -- deer, turkey, and other varieties. When first seen, all was in lovely, beautiful spring, and I was nine years old."
The Creek Indians left no written records of their empire. In their tragic struggle with encroaching whites, the Creeks were slowly driven from all their ancestral lands. By 1823, they had been forced from the territory that was later to be the site of Atlanta. The area became the property of the state of Georgia, and very soon the home of white settlers.
As the state of Georgia acquired land from the newly dispossessed Indians, it distributed it to white settlers by land lotteries.
Standing Peachtree was located on both sides of the Chattahoochee River at the mouth of Peachtree Creek. This name is an English translation of the Indian name for the Creek Indian Village, Pakanahuili. James Montgomery was the postmaster of the early community.
The Creek and the Cherokee lived in what is now Fulton County. Their boundary, along the Chattahoochee River, was a cause of dispute. The Creeks, a confederation of tribes which had occupied most of Georgia from 1715 to 1821, lost their territory through a series of treaties. The Creek Red Stick group advocated for war against Europeans and Americans to preserve their culture. When other Creek tribes opposed this idea, the Creek Wars resulted.

The Hillabee tribe of the Creeks moved into the Chattahoochee River basin to avoid involvement with the Red Stick uprising. Their occupation in what is now Fulton County lasted from 1814 to 1821. The two major Creek towns along the Chattahoochee River were Standing Peachtree, located at confluence of Peachtree Creek and the Chattahoochee River, and Sandtown, located south of Utoy Springs, near Buzzards Roost (Sulecauga), an island in the Chattahoochee. Sandtown was occupied by Creeks who had moved, after the Creek War of 1813-1814, from the town of Oktahasasi (Sandtown) on the Tallapoosa River, on the Georgia-Alabama border.  Both towns were trading centers between the Creek, Cherokee and the white settlers. Several Indian trading routes crossed through Fulton County. The Sandtown trail ran from the Hightower trail, crossed Buzzard Roost island in the Chattahoochee, and then continued west. The discovery of gold in north Georgia and the need for new lands, led the federal and state governments to negotiate treaties with the Creeks and Cherokees for their lands. The land that is now Fulton County became part of the state of Georgia under several different treaties between the United States and the Creek and Cherokee Nations.
This ancient trail led west to the Indian village of Standing Peachtree. It joined the Shallowford Trail near this spot linking it with trade routes to Stone Mountain. Later becoming a road it was among those first authorized when DeKalb County was formed out of Henry County following the 1821 Treaty of Indian Springs. On July 28, 1823 the newly formed Inferior Court of DeKalb County ordered that "new roads be cut out from Lot 246," its chosen location for the county seat that would become the city of Decatur. The courth appointed Naman Hardman (among others) to "view and designate the different routes...from Standing Peachtree to said lot." Naman Hardman was an early settler in this part of DeKalb County who owned land between the two trails.
The road was first called the Peachtree road, but in 1837 James Montgomery established a ferry crossing on the Chattahoochee River at Standing Peachtree. Subsequently this road became known as "the Montgomery Ferry road and then later, the North Decatur and Atlanta road."
In 1905 with her own funds, Mrs. Amanda Powell Houston, Naman Hardman's niece had erected beside this road a community chapel. Constructed of heart-of-pine lumber, it had an organ and seated sixty worshipers. Known as the Houston Chapel, it remained in service to the community until about 1917 at which time it was moved approximately 1,000 feet south of this marker and converted to a residence for Rev. Ernest Moore. Moore resided in the former chapel until his death in 1992.