Roller Derby Teammates, Clarice Martin and Bernie McKay (88.22.2) One exhibit that displays that roller derby provided Americans with one of their first opportunities to witness women compete in a sport under the same rules of play as men. 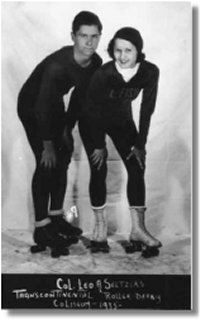 The USA Roller Sports Association opened the National Museum of Roller Skating in 1980. Their mission is "to enrich the people's lives by increasing their understanding and enjoyment of roller skating's past". To accomplish the mission, the museum has exhibits on all aspects of roller skating, such as early skates, sports, and the recreational side. Because admission is free, the museum relies solely on donations and membership dues for funding.

The history of roller skating began back in London in 1743. They first appeared in a London stage performance, but no inventor was ever credited. John Joseph Merlin is on record as the inventor of inline skates in 1743.  Merlin never did patent his invention, and there wasn't a patent till 1819 when Monsieur Petitbled patented them. These early skates had three wheels in a line and were hard to maneuver. Then in 1863, James Plimpton changed the design to four wheels, two pairs set side-by-side. This design has remained basically the same from then to modern day roller skates. There are exhibits in the museum that depict these early days of skating for visitors to view.

The museum follows the history of roller skating from those early days through current day skating. Visitors to the museum can interact with different versions of wheels with the wall of wheels and see different uniforms and costumes worn by performers. Some of the clothing includes uniforms from speed skating and figure skating competitions. One display is gold medalist Tara Lapinski's 1991 National Championship uniform. At the museum, there is something for everybody, especially in the "odd and unusual skates". Displayed here are stilt skates, motorized skates, and even skates made for a parakeet, a horse, and a bear.
Roller skating has been a huge favorite past time, and the museum brings back those nostalgic days.  Parents and grandparents enjoy reminiscing and bringing children to the museum to relive the "good ole days". Competitors in the skate world also enjoy seeing how skating has evolved.