Completed in 1870, the Old Indiana Courthouse served the needs of the county for a century. It was designed by local architect, James Drum, in the Second Empire Italianate style. The courthouse’s most striking exterior feature is its large, gold leaf cupola clock tower, while its interior is dominated by its second-floor courtroom with 30-foot ceiling. The Old Courthouse was taken out of service in 1970 and faced demolition shortly thereafter. However, the county reached a restoration-lease agreement with the National Bank of the Commonwealth which saved it from the wrecking ball. The Old Courthouse now houses the administrative offices of First Commonwealth Financial. It was added to the National Register of Historic Places in 1974.

The Old Indiana Courthouse was the judicial center of the county for a century before it was replaced in 1970. 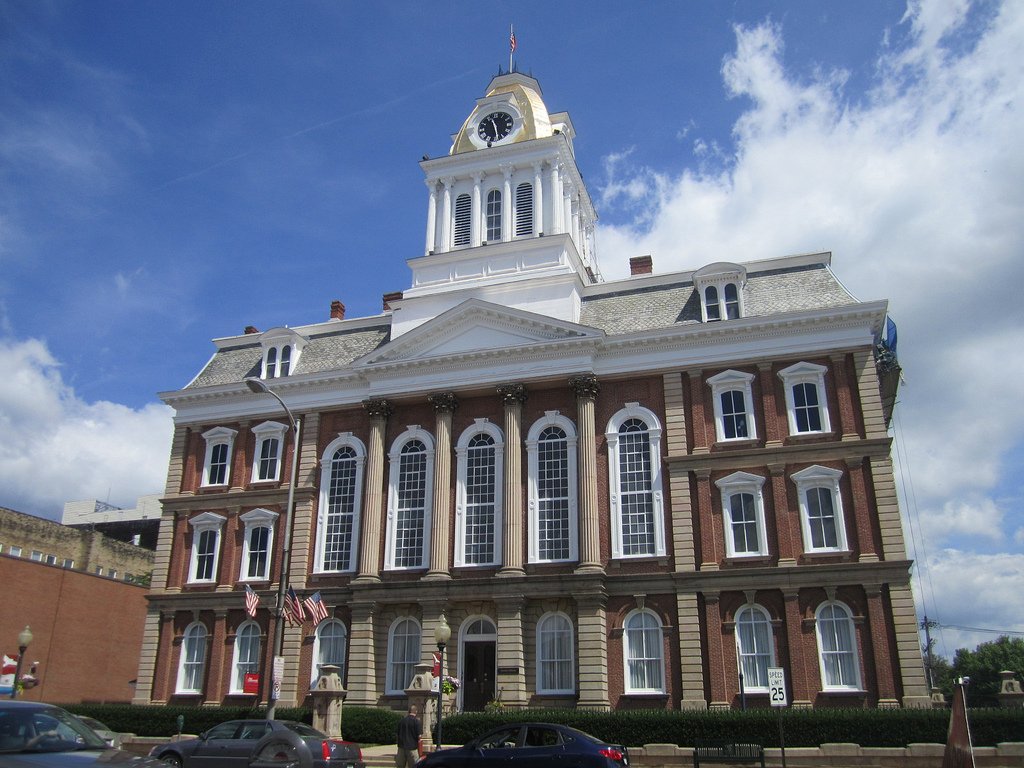 A close-up of the courthouse's clock tower. 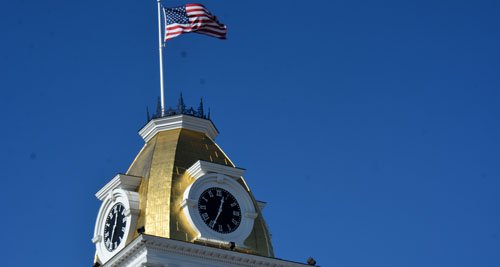 The September, 1945 cover of Life which featured Jimmy Stewart with the Old Courthouse in the background. 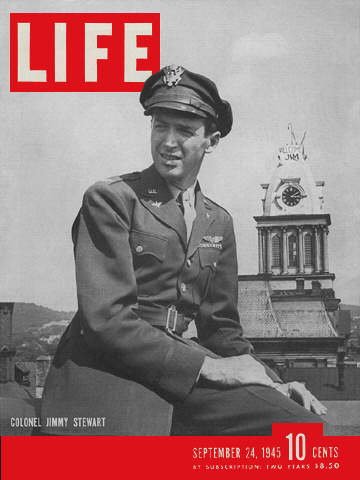 The bridge that connects the Old Courthouse to the Old Indiana County Jail. 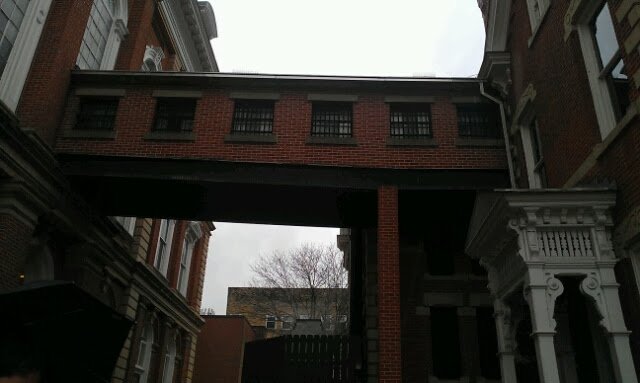 The Old Courthouse, in miniature, within the Carnegie Science Center's model railroad. 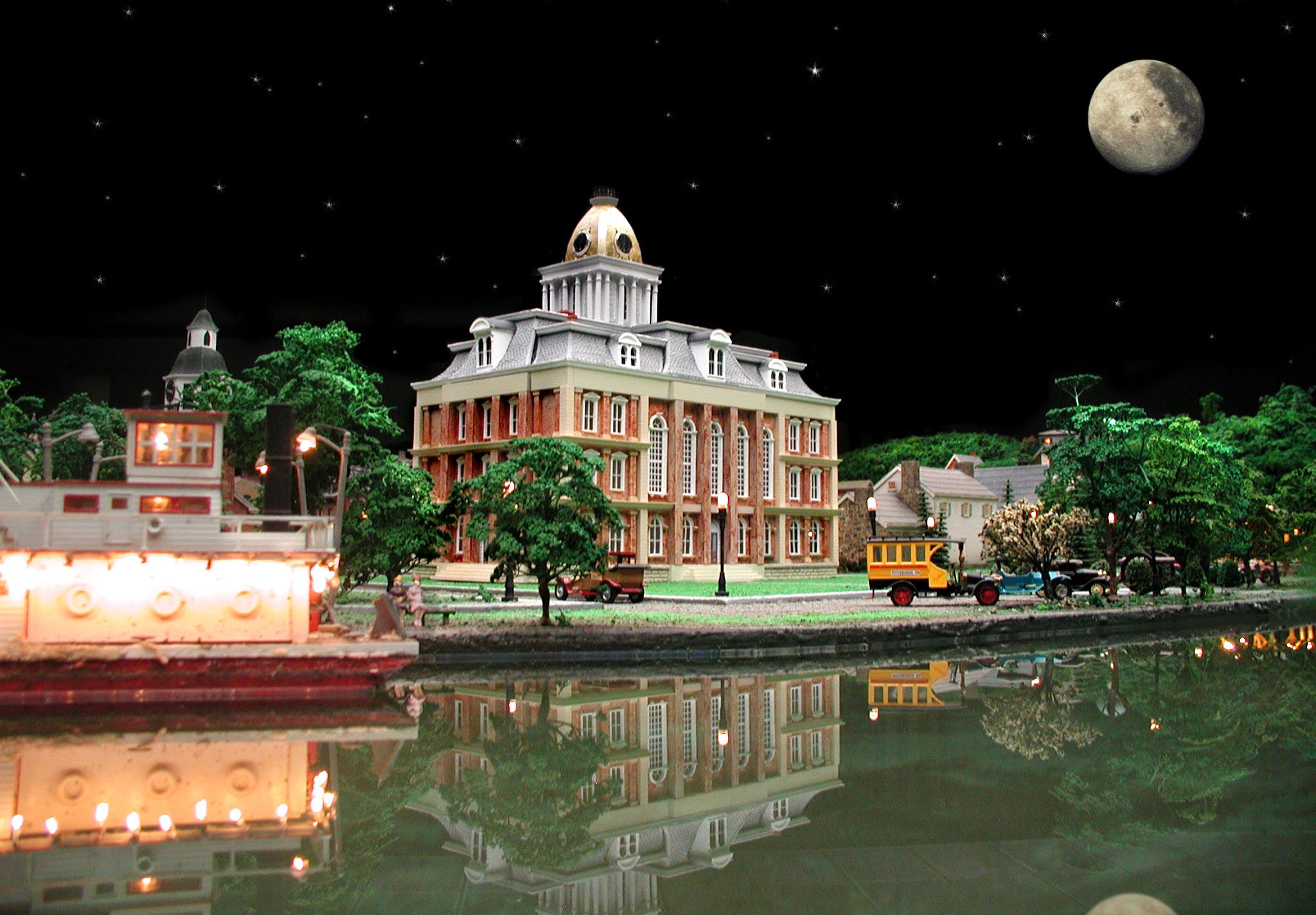 Indiana County’s first courthouse served its citizen’s legal and administrative needs from 1808 until it was torn down in 1868.  The county’s second courthouse, now referred to as the Old Indiana Courthouse, was completed two years after the first was demolished.  The Old Courthouse was designed in the Second Empire architectural style by James Drum.  Drum created a three-story, red brick and stone structure with a Mansard roof, stone belt courses separating the floors, and windows with arched lintels and keystones each separated by pilasters or Corinthian columns.

Sitting atop the courthouse is a large cupola clocktower with four, seven-foot diameter faces and a gold leaf roof.  At the time of its construction it was the largest such clocktower in the county.  It was built by the Howard Clock Company and required winding once per week.  That winding is no longer necessary as it was converted to electricity in 1950.  The clocktower still dominates the Indiana skyline while informing its townspeople of the time of day.

For a century, the Old Courthouse housed the county’s government offices.  However, its second-floor courtroom is its most striking interior feature.  This large, 100-foot by 82-foot courtroom features frescos of Greek allegorical figures on its walls and its varnished wood ceiling soars 30-feet overhead.  Its massive windows were originally stained glass, but were replaced with clear glass in 1929.  In 1879 a jail and sheriff’s residence were built behind the courthouse and attached to it by a bridge to the second-floor courtroom over which the accused and convicted traveled to and fro.

The Old Courthouse figured prominently in Indiana’s centennial celebrations in 1903 during which the Women’s Christian Temperance Union installed a drinking fountain for people, horses and dogs.  It was removed in 1916.   The Old Courthouse was also featured on a famous cover of Life Magazine which also featured Indiana’s favorite son, Jimmy Stewart, after he returned from service in World War II in September of 1945.  Presidential candidate, John F. Kennedy, also made a famous campaign speech on its steps in October of 1960, one month prior to winning the presidential election.  Eventually, Indiana County outgrew the Old Courthouse and a new one was constructed in 1970.  The future of the Old Courthouse was in doubt until the county created a unique arrangement with the National Bank of the Commonwealth which ensured its preservation.