One of 40 National Historic Landmarks in North Carolina, the Market House is one of the more unique buildings in the state. Modeled after similar buildings in England, it was built in 1832 on the same spot where the former statehouse had once stood (this burned down in a great fire in 1831, which destroyed other buildings in the city). As its name indicates, the building served as a market; local farmers sold their produce and meat on the ground floor under the arches. The upper floor was used as the town hall until 1907. It seems that space houses a small museum or is available to rent for meetings. The Market House is also known as a place where slaves were sold up through the Civil War (slaves were sold at the destroyed statehouse as well).

The Market House was built in 1832 and is a National Historic Landmark. 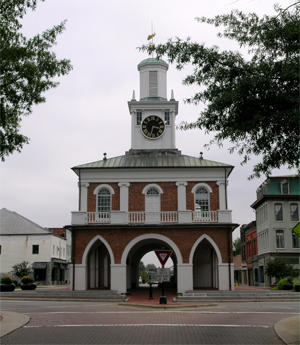 The former statehouse building was where state delegates ratified the U.S. Constitution, where the University of North Carolina was chartered, and where the state ceded its western territory so that Tennessee could be established. Another notable event was a skirmish that occurred here between Union and Confederate forces during the Civil War.

The Market House was also the location of the murder of Archibald Beebee.

Beebee, a black man, had been accused of raping a white woman and was brought down from the second level of the Market House after a hearing. He was being returned to the guard house on Gillespie Street and as he was approaching the eastern archway under guard of two men, one the sheriff, there was a rush in the crowd. One man attempted to take Beebee from the sheriff, and Beebee stumbled. As he was standing up he was shot in the head from behind by William J. Tolar and killed instantly.

The southeast corner was mentioned as the place of the murder ("Proceedings" 3).

Tolar and his co-conspirators were originally found guilty and sentenced to death by a military court. This sentence was later overturned by President Andrew Johnson.

According to The Literary Career of Charles W. Chesnutt, Chesnutt, then age nine, saw the body of Beebee after the murder. He went on to reference a fictional version of the incident in his novel The House Behind the Cedars.

The Market House was also the scene of a very telling episode in the restoration of white supremacy following Reconstruction when Charles Chesnutt, in May 1880, attended the Republican Party convention at the Market House and accepted the nomination for town commissioner. Chesnutt's father had served "as county commissioner and justice of the peace for Cumberland County in the years of Republican ascendancy" (Chesnutt 136).

The day following Chesnutt's acceptance of the nomination, however, he was approached by two white trustees of the colored normal school and encouraged to withdraw, which he did.

Richard Brodhead, the editor of Chesnutt's journals, describes this episode as part of "efforts of the colored normal school's white supporters to depoliticize the school, to separate black educational leadership from more general public power" (136).