At this location from 1911 to 1915, Wyatt Hamilton “W. H.” Thompson published the Socialist and Labor Star, a newspaper published in Huntington during the height of the Socialist movement in West Virginia during the early twentieth century. The paper's headquarters was a former building on Seventh Avenue and the paper was printed under the name of the Socialist Printing Company. The paper covered issues related to the labor movement and commented frequently on the 1912-1913 Paint Creek-Cabin Creek Strike. The political views of the Labor Star and its harsh criticism of Governor Henry Hatfield led local officials to order the police to raid the newspaper office on the morning of May 9, 1913. Under the orders of governor Hatfield, editor W. H. Thompson was arrested and the Labor Star's printing press was destroyed by state militia. The paper recovered from the incident and continued publication until it merged with a Socialist paper in Charleston to form the Argus Star in 1915.

The May 30, 1913 paper, the first published after the raid on May 9. In all the confusion that month, the date was mistakenly printed as 1912. Image obtained from the Library of Congress. 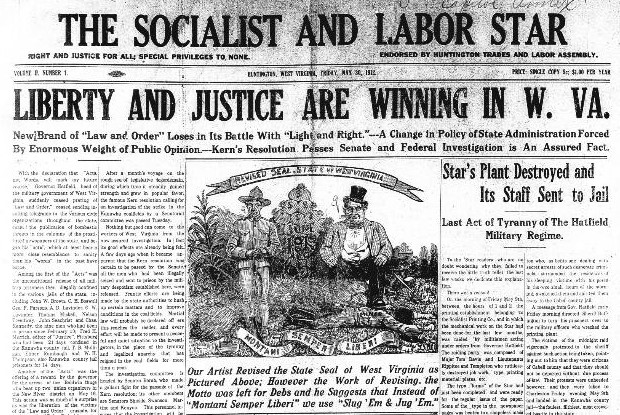 Socialist and Labor Star paper in 1914. Image obtained from the Library of Congress. 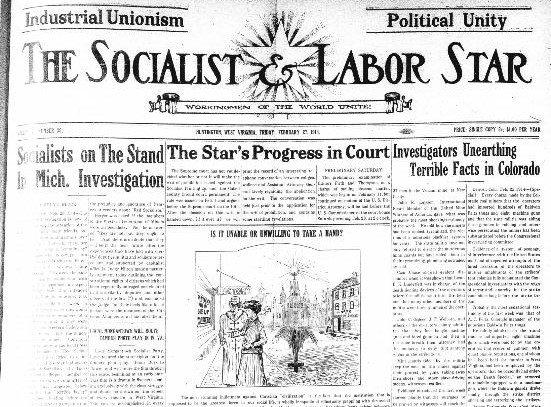 In 1915 the title of the paper was shortened to the Labor Star. Shortly afterwards it would merge with the Charleston Argus Labor. Image obtained from the Library of Congress.

The Socialist movement came to West Virginia in the early 1900s and found a receptive audience among the working class, primarily coal miners but also those in manufacturing industries. Support grew rapidly, and by the 1910s there were thousands of Socialist Party members in the state, organized into 86 branches. Socialists were elected to 40 local political offices, and a number of communities were dominated by Socialist municipal governments, most notably Morgantown. The Socialist Party focused heavily on workers’ rights and became associated with many labor unions. Socialism in West Virginia began declining in the mid-1910s due to a variety of factors: new restrictions on third parties imposed by the state legislature; the alienation of many party members when some developed a more militant ideology; and the United States’ entry into World War I.

Several newspapers dedicated to Socialist ideology were published in West Virginia, with one opening in Huntington in 1911 or 1912. The Socialist and Labor Star was described as the official mouthpiece of the Huntington Trades & Labor Assembly. The Labor Star was housed in a building on Seventh Avenue. It was owned and operated by The Socialist Printing Company, a printing business that also sold books, stationery, and other printed materials for local labor unions. The four-page newspaper was published weekly on Fridays.

The paper’s founder and editor, Wyatt Hamilton “W. H.” Thompson, was born in Malden, West Virginia in 1885. Thompson spent his childhood working in a coal mine before securing a printing apprenticeship in Charleston. Thompson served two terms as president of the Huntington Typographical Union, was a delegate to the 1914 American Federation of Labor Convention, and occasionally wrote pieces for publications such as the International Socialist Review. It is significant to note that Thompson did not receive a salary for his work with the Labor Star and worked for another local newspaper to supplement his income. Other members of the staff included Ralph Chaplin, who later became an editor for the Industrial Workers of the World; and Sarah Swann, the paper’s only female editor.

During its brief existence, the Labor Star focused primarily on labor-related issues, politics, foreign policy, and religion. The paper found itself in hot water in 1913 when it began commenting on the Paint Creek-Cabin Creek strike in Kanawha County. The strike began in April 1912 when coal mine operators refused to renew their contract with the United Mine Workers union. The strike descended into violence, with armed clashes between miners and strikebreakers hired by the mine operators. The strike ended a year later in April 1913 when Governor Henry Hatfield imposed a controversial settlement on the miners and operators. Thompson and the Labor Star strongly criticized the proposal, arguing that it cheated miners and did not offer them any concessions. The newspaper’s attacks on the agreement drew the attention of Hatfield, who came to regard the Labor Star as a political enemy.

On May 5, 1913 warrants were signed for the arrest of Thompson and four other officials in the Socialist Printing Company under the guise that they were inciting riot and insurrection. Under the orders of Governor Hatfield, members of the Cabell County Sheriff’s Department and the state militia launched a raid on the Labor Star and its employees on May 9. At around two o’clock in the morning sheriff’s deputies arrested Thompson, Elmer Rumbaugh, F. M. Sturm, R. M. Kephart, and George W. Gillespie at their residences. Meanwhile, the militia went to the Labor Star’s printing facility, confiscated the May 9 edition, and destroyed the printing presses. The Labor Star estimated that up to $2,000 in damage had been inflicted upon the Socialist Printing Company.

After a brief detainment, Thompson and the others were transferred from Cabell County to the Kanawha County jail. Gillespie, Sturm, and Kephart were released the following day, but Thompson and Rumbaugh were held for another fourteen days; none of them were ever charged with a crime. Despite the destruction of its presses and significant financial troubles, the Labor Star resumed publication on May 30; it promptly described the raid as an “act of tyranny of the Hatfield Military Regime”. In 1915 it merged with the Argus Labor Socialist newspaper in Charleston to create the Argus Star.  Thompson became editor of the new paper and for a time it had offices in both Huntington and Charleston.

Corbin, David A. “The Socialist and Labor Star: The Harassment of Heresy.” In Gun Thugs, Rednecks, and Radicals: A Documentary History of the West Virginia Mine Wars. PM Press, 2011.

“Raid on The Socialist and Labor Star.” Huntington Advertiser, May 9, 1913. Accessed August 19, 2018. http://www.wvculture.org/history/labor/socialist03.html

“Raid on The Socialist and Labor Star.” Huntington Herald-Dispatch, May 9, 1913. Accessed August 19, 2018. http://www.wvculture.org/history/labor/socialist02.html