Found within Allegheny and Bath Counties, Douthat (pronounced “doubt-that”) State Park features some of Virginia’s most incredible scenery and is one of the premier mountain biking locations on the East Coast. Constructed by the Civilian Conservation Corps (CCC) during the height of the Great Depression, Douthat State Park opened on June 15, 1936. The park was one of the original six state parks in Virginia and the majority original structures remain in use today, making it one of the best-preserved parks in the state. Today Douthat is an outdoor and mountain biking destination with over 40 miles of trails, many bikers refer to the park as the “Disneyland of mountain biking.” The park also offers fishing, camping, hiking, swimming, and boating. Douthat State Park was added to the Virginia Landmarks Register on June 17, 1986 and to the National Register of Historic Places on September 20, 1986.

Example of the cabins in Douthat State Park 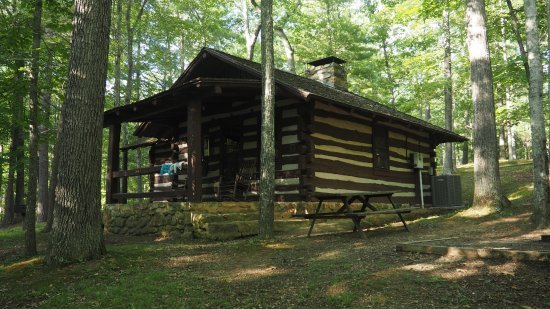 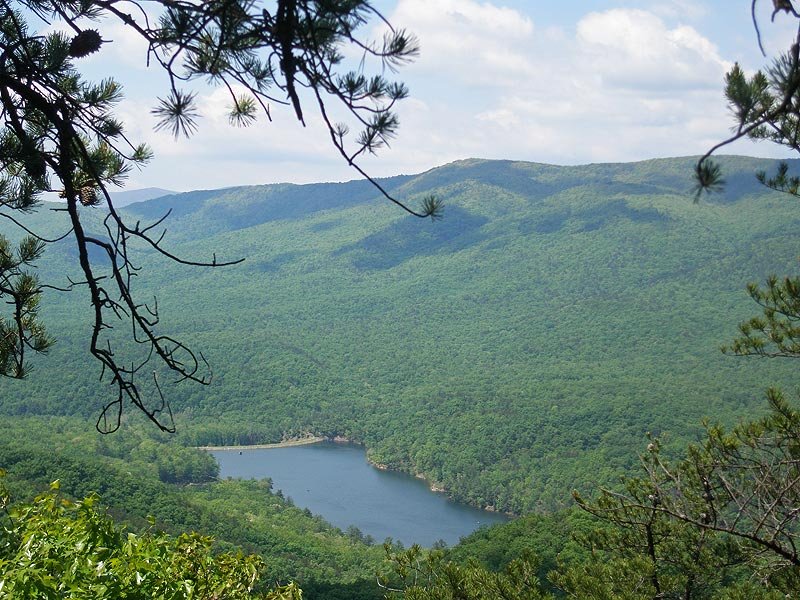 As part of President Franklin D. Roosevelt’s New Deal program during the Great Depression, funding and labor opportunities for public infrastructure became available to state governments. With guidance from the National Park Service, many states, including Virginia, took advantage of this opportunity and began construction on their own state parks. From the guidance of Bob Burson, the Virginia State Commission on Conservation and Development chose a site in Allegheny and Bath Counties to represent the Mountain and Valley region for Virginia’s burgeoning state park system. The area chosen for Douthat State Park was originally part of a 105,000-acre parcel of land granted to Robert Douthat by the Commonwealth of Virginia in 1795. Changing hands various times throughout the 19th-century, the tract of land wound up in possession of a group of Virginia businessmen known as the Douthat Land Company. During the early-1930s, the Douthat Land Company donated 1,920 acres to the Virginia Commission on Conservation and Development for the creation of a state park. The remaining 2,625 acres of the park were acquired from neighboring properties during the second half of 1933. In the end 4,545 acres were acquired and the park named Douthat State Park in honor of the Douthat Land Company for the generous donation.

By July 1933, 600 men from Virginia and Pennsylvania in Civilian Conservation Corps companies 1386, 1373, and 1374 arrived on site to begin constructing Douthat State Park. Each CCC camp became responsible for specific construction duties on the park: Camp 1386 constructed the trails, plant nursery for landscaping, and other general forestry work, Camp 1373 constructed the park’s dam, and Camp 1374 was responsible for all other construction needs such as cabins, shelters, and maintenance roads. Douthat State Park officially opened to public on June 15, 1936 to a crowd of a few thousand visitors. Despite it being opened in 1936, the park was not completed until 1942 when the CCC was officially dissolved by Congress. At its completion, Douthat State Park offered 25 cabins, a 50-acre lake with a sand beach access, picnic areas, hiking trails, camp sites, a restaurant, and an information center.

Like the other five state parks, the architecture of Douthat State Park is reflective of the mountainous region in which it is located. Boasting primitive and rustic architecture, Douthat State Park was designed to incorporate local materials to create a simplistic and secluded atmosphere. The majority of the park’s original structures and natural features remain intact and in use today, making it one of the most well-preserved parks of the original six. Over the course of its existence, some changes have been made to Douthat State Park, as it now offers 32 cabins with two being handicapped accessible. The sheer size of the park makes it the largest state park in the Virginia state parks system, which, by offering over 43 miles of trails and mountain biking trials, has made Douthat a leading mountain biking location on the East Coast. In addition to hiking and mountain biking, the park offers fishing, an amphitheater, concession stand, boat rentals, gift shop, guided hikes, and other nature programs. Douthat State Park was added to the Virginia Landmarks Register on June 17, 1986 and to the National Register of Historic Places on September 20, 1986.