Opened in 1936, Staunton River State Park is one of the original six Virginia state parks that utilized construction labor from the Civilian Conservation Corps. As the park is situated at the confluence of the Roanoke and Dan Rivers, the John H. Kerr Dam was erected downstream in 1952 as a means to mitigate the flood damage. As a result, Virginia’s largest lake, Buggs Island Lake developed around the park. Today, Staunton River State Parks provides many recreational facilities, such as a boat-launch, swimming pool, camping, and hiking. Staunton River State Park was designated a Virginia Historic Landmark in 2006 and added to the National Register of Historic Places in 2007. 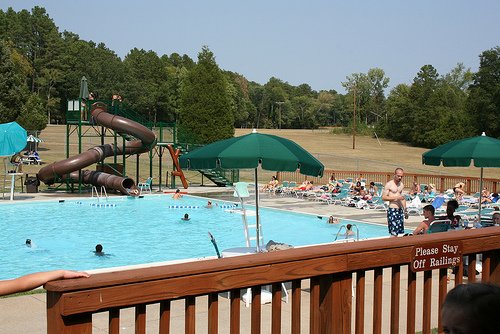 As part of President Franklin D. Roosevelt’s New Deal program during the Great Depression, funding and labor opportunities for public infrastructure became available to state governments. With guidance from the National Park Service, many states, including Virginia, took advantage of this opportunity and began construction on their own state parks. From the guidance of Bob Burson, the Virginia State Commission on Conservation and Development chose a site in South Central Virginia, 25 miles from the North Carolina border, at the confluence of the Roanoke and Dan Rivers to create a new state park named Staunton River State Park. Staunton River, as it came to be known, is a historic section of the Roanoke River named for Captain Henry Staunton. Prior to the Revolutionary War, Staunton commanded a militia against Native American attacks from the Dan River to the foot of the Blue Ridge Mountains. On October 6, 1933, the Virginia State Commission secured 1,196.5 acres of farmland and woodland the former plantation titled the Fork Plantation along the Staunton River section of the Roanoke River. Twenty-one days later, on October 27, the state became official owners of the land parcel. The counties of Halifax, Charlotte, and Mecklenburg and the state itself each contributed $2,500 towards the price of $10,000 for the property. By the end of 1933, additional acres were acquired which raised the size of the park to 1,640 acres.

Two Civilian Conservation Corps companies were assigned to the construction of the park. The first company, SP-16, organized from Fort Niagara, NY and came from Glacier National Park; while the second company, SP-17, came from Bovill, ID. Both companies arrived onsite on October 16, 1933 and immediately set to constructing their own barracks and other park infrastructure including a recreation hall, water system, cabins, and trails. It was required at that time for all state parks to possess a water feature, William Carson suggested constructing a swimming pool in the park as the Dan and Roanoke Rivers were too polluted for swimming. Upon its completion, the swimming pool measured 150 ft. by 60 ft. and possessed a 40 ft. wading pool. Staunton River State Park’s swimming pool was promoted as the largest in the state. Electricity was not installed in the park during its construction, but was added later in 1941 and used primarily for lighting.

Staunton River State Park officially opened to the public on June 15, 1936. That year welcomed 12,581 visitors, making the park the third highest in attendance of all six parks. Despite the park being relatively popular in 1936, cabin rentals for Staunton River were surprisingly low due in most part to the inability of local residents to financially afford them. As a means to address this issue, the Commission on Conservation and Development leased the cabins to a school in nearby Appalachia during the summer months. Even so, Staunton River State Park never witnessed the same amount of overnight use as the other state parks until later in the 20th-century.

Because Staunton River State Park is situated at the confluence of two rivers, flooding became a serious issue, so much so that the park infrastructure was situated on higher ground. Between 1899-1940, at least 50 floods resulted in damage in the area. To alleviate the flooding of the Roanoke River Basin, a plan to dam the Roanoke River below the state park was created and proposed to Congress. The plan received Congressional approval in 1944, construction of the dam began in 1947, and the dam – named the Kerr Dam – completed in 1953. The dam resulted in the creation of Virginia’s largest lake, Buggs Island Lake. The dam also resulted in an increase of the Roanoke River by twenty feet, which caused a loss of 300 acres inside Staunton River State Park. However, because of silt deposition, the park is slowly regaining its waterfront acreage.

Today, Staunton River State Park offers 2,400 acres of outdoor space and remains a highly sought-after outdoor recreation destination for Southern Virginia. Visitors to the park have the options of overnight camping, an equestrian facility, fishing, boating, an Olympic-sized swimming pool, tennis and volleyball courts, three playgrounds, and more than seventeen miles of multiuse trails. A vast majority of the park’s original CCC-era buildings remain in use today. In 2007, Staunton River State Park was added to the National Register of Historic Places and designated a Virginia Historic Landmark.