Great Falls Park is a unit of the George Washington Memorial Parkway and a little-known national treasure. The history at Great Falls dates back thousands of years as the site served as a meeting ground for nearby Native Americans tribes, and petroglyphs from these individuals still exist in the park today. During the early years of the United States, George Washington contributed to the funding and design of the Patowmack Canal, a one-mile canal that circumvented the Great Falls of the Potomac River. Considered a civil engineering feat of its time, the canal only operated between 1785-1830 when the canal went bankrupt and the introduction of the railroad made it obsolete. During the twentieth-century, Great Falls transitioned into a tourist destination first with an amusement park and then as a National Park. Boasting 800 acres of nearly forested river-front land only fifteen miles outside of Washington, D.C., Great Falls Park now encompasses the Great Falls of the Potomac River, Mather Gorge, and the remains of the Patowmack Canal and Matildaville.

The Great Falls of the Potomac 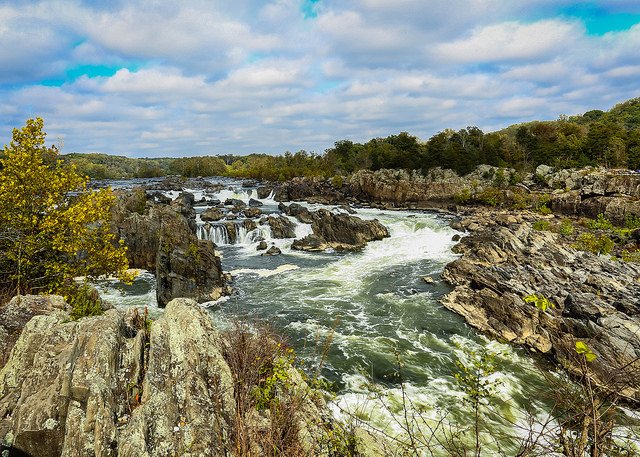 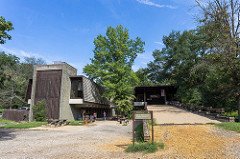 Remains of the Patowmack Canal 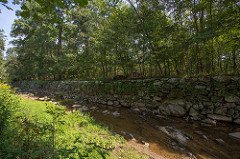 The history at Great Falls stretches back thousands of years as the jagged rock formation in the Potomac River served as a meeting ground for Native Americans, particularly for members of the Powhatan Confederacy and the Iroquois Nation. Archaeological digs have discovered around 100 different sites connected to these early Americans, and petroglyphs from these individuals can still be found on some rock outcroppings in the park. During the early Colonial Eara, Virginia’s Tidewater region got parceled out in 1648 by King Charles II, and in 1718 the land around Great Falls came into ownership of the Lords Fairfax.

After the Revolutionary War, the United States entered into a new period of technological growth and expansion. In an attempt to open up trade across the Allegheny Mountains, George Washington sought to connect the Potomac and Ohio Rivers. Washington worked alongside the Virginia and Maryland state assemblies to create a company for the sole purpose of improving the Potomac River between its headwaters and tidewater, roughly between Cumberland, MD and the Georgetown neighborhood in DC. On May 17, 1785, the Patowmack Canal Company was organized with George Washington serving as its president. While general improvements were laid out for the Potomac, construction of a canal and lock system would be necessary to bypass the rapids at Great Falls. For the next seventeen years, the canal and locks were primarily constructed by local enslaved laborers. Considered a civil engineering breakthrough of the era, the civil engineers executed one of the first successful uses of Black powder blasting. A town also sprang up at beside the locks that served as the company’s headquarters. Chartered in 1780, Matildaville, named after the wife of Light Horse Harry Lee, became the most prosperous town in Fairfax County by 1789.

Financial woes plagued the Patowmack Canal Company from its very beginning, and in 1828, after the advent of the railroad, the company filed for bankruptcy and the canal and town were abandoned. Throughout the rest of the nineteenth-century and the first half of the twentieth-century, several companies owned and sold the canal and its surrounding land: Chesapeake & Ohio Canal Company, Great Falls Manufacturing Company, Great Falls Power Company, Washington and Old Dominion Railroad, and the Potomac Edison Power Company. Between 1906 and 1952, the W & OD Railroad operated Great Falls Amusement Park which included a carousel, dance pavilion, and a picnic area on the current 16 acres of the park.

In 1930, the Capper-Crampton Act established the George Washington Memorial Parkway and contained a clause for the later inclusion and protection of Great Falls Park. For the next 30 years, the Nature Conservancy, Fairfax County, and the National Park Service worked to preserve the Patowmack Canal, Matildaville ruins, and surrounding landscape. Then in 1966, the National Park Service acquired the 800 acres of land around Great Falls and began operating Great Falls Park as a unit of the George Washington Memorial Parkway. In 1969, the Patowmack Canal Historic District was designated a National Civil Engineering Landmark and the Matildaville ruins were designated a National Historic Landmark in 1983.

Great Falls today is a considered a quiet escape from the hustle and bustle of the Washington, DC Metro Area. Only fifteen miles from the capital, the mostly forested park offers a wide range of outdoor activities, such as hiking, picnicking, rock climbing, and kayaking is permitted in the Potomac River. The Great Falls of the Potomac, the most popular attraction of the park and the reason for the area’s history, are Class 5-6 Whitewater rapids that fall 76 ft. in total. Great Falls Park Visitor’s Center provides information on the park’s unique ecology and geology.