Constructed between 1884 and 1901, this building is home to St. Paul African Methodist Episcopal Church, the oldest African American congregation in Wake County. In the early 19th century, African Americans were second-class members of Edenton Street United Methodist Church. While they were still officially under the authority of white Methodist church leaders, free and enslaved congregants had essentially formed their own church by 1848 and even met in a separate building. By the end of the Civil War, Black congregants formed their own church as part of the African Methodist Episcopal Church that had been established in Philadelphia in the early 1800s. The church was home to many historic meeting during the Civil Rights Movement and was also the location of Reverend Jesse Jackson's “Rainbow Coalition” speech in 1988. 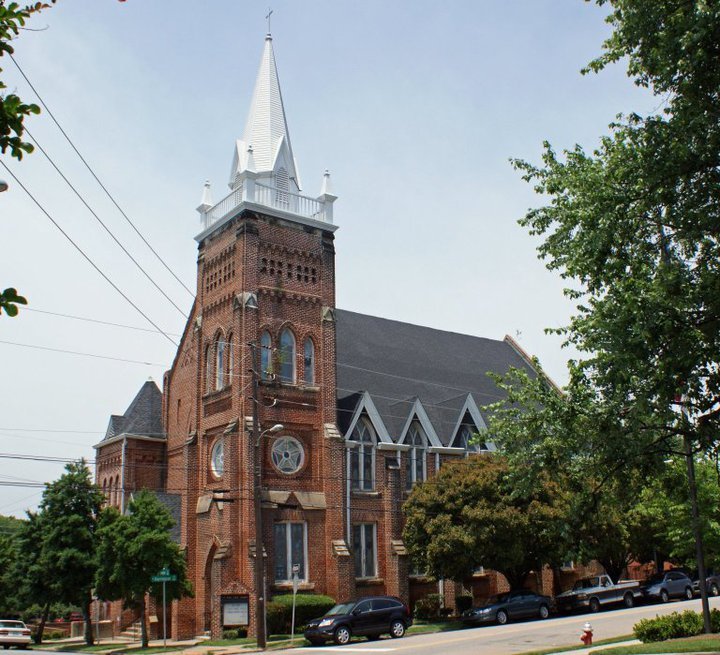 St. Paul African Methodist Episcopal Church traces its roots back to 1811 and a small number of enslaved persons who attended the newly-established Edenton Street United Methodist Church. By 1846, Black membership of Edenton Street had grown and these members of the congregation held their own worship services in the basement of the church and later met at the vacant Old Christ Episcopal Church. Although officially part of the Edenton Street congregation, African American congregants referred to their organization as St. Paul Church. In 1853, the white Methodists purchased the Old Christ Church and the Black congregation moved the building to the corner of Edenton and Harrington Streets.

With the end of the Civil War and slavery, African American church members separated themselves completely from the Edenton Street Methodist Church and joined the African Methodist Episcopal Conference, a Black denomination that had been organized in the late 18th century by Richard Allen in Philadelphia. Later in the year, the conference appointed Reverend George A. Broadie as the first pastor of St. Paul’s Church.

Construction of the current church began in 1884 with a ceremonial dedication of the first cornerstone. However, the new church took 25 years to complete as the low wages for many of the congregants restricted the process of construction. With the completion of the sanctuary in May 1901, the Governor of North Carolina Charles B. Aycock delivered a speech for the occasion and Raleigh’s News & Observer commented that the building is “one of the handsomest colored churches in the South.” In the summer of 1909, a stray balloon ignited the wooden shingles on the roof and burned everything except the brick walls. Both the white and Black community of Raleigh came together with donations for the church, and along with insurance money and bank loans, the congregation rebuilt its impressive Victorian Gothic Revival church in 1910.

Throughout Reconstruction, the era of segregation, and the Civil Rights Movement, St. Paul was a central institution and meeting place for members of the Black community in Raleigh. The church held lectures and rallies and served as an organizational space during the 1950s and 1960s. The membership if the church includes many of North Carolina’s most significant Black leaders such as Senator Rev. Henry Eppes, Stewart Ellison, Rev. R. W. H. Leak. More recently, Reverend Jesse Jackson delivered his “Rainbow Coalition” speech at St. Paul’s during his failed presidential run in 1988. Today, the church continues to represent Raleigh’s Black community.