The fifteen-and-a-half foot monument, sculpted by prominent artist Alexander Doyle, was unveiled in 1888 to honor Continental Army Sergeant William Jasper. The monument itself is thought to be placed only a few hundred yards from where Jasper died during the siege of Savannah in 1779, facing against the British who controlled Savannah at the time. The monument depicts Jasper raising the flag of the Second Regiment of South Carolina in one hand, with his saber in the other covering a bullet wound. At his feet is his hat, full of bullet holes. There are three panels on the base of the statue that depict what were thought to be highlights of his life: replacing the flag at Fort Sullivan while under fire, liberating Patriot War prisoners on their march to be hanged, and his death, which occurred shortly after the siege on Savannah. 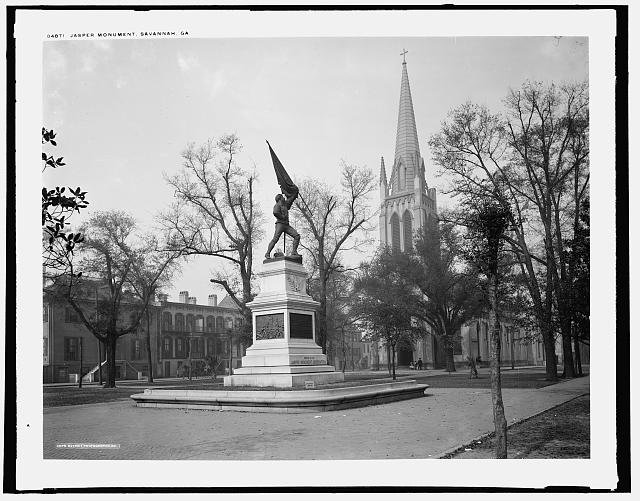 "The Heroism of Sergeant Jasper in the Defense of Fort Moultrie, South Carolina" Engraved by G.R Hall. Retrieved from Bridgeman Images. https://search-proquest-com.marshall.idm.oclc.org/docview/1974090801?accountid=12281 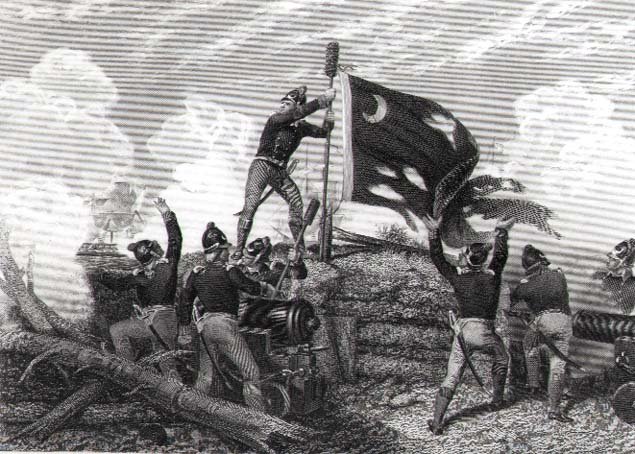 The Plaque on the Monument. Taken by Charles Tilford. Retrieved from https://www.flickr.com/photos/charlestilford/6027128086/in/photostream/ 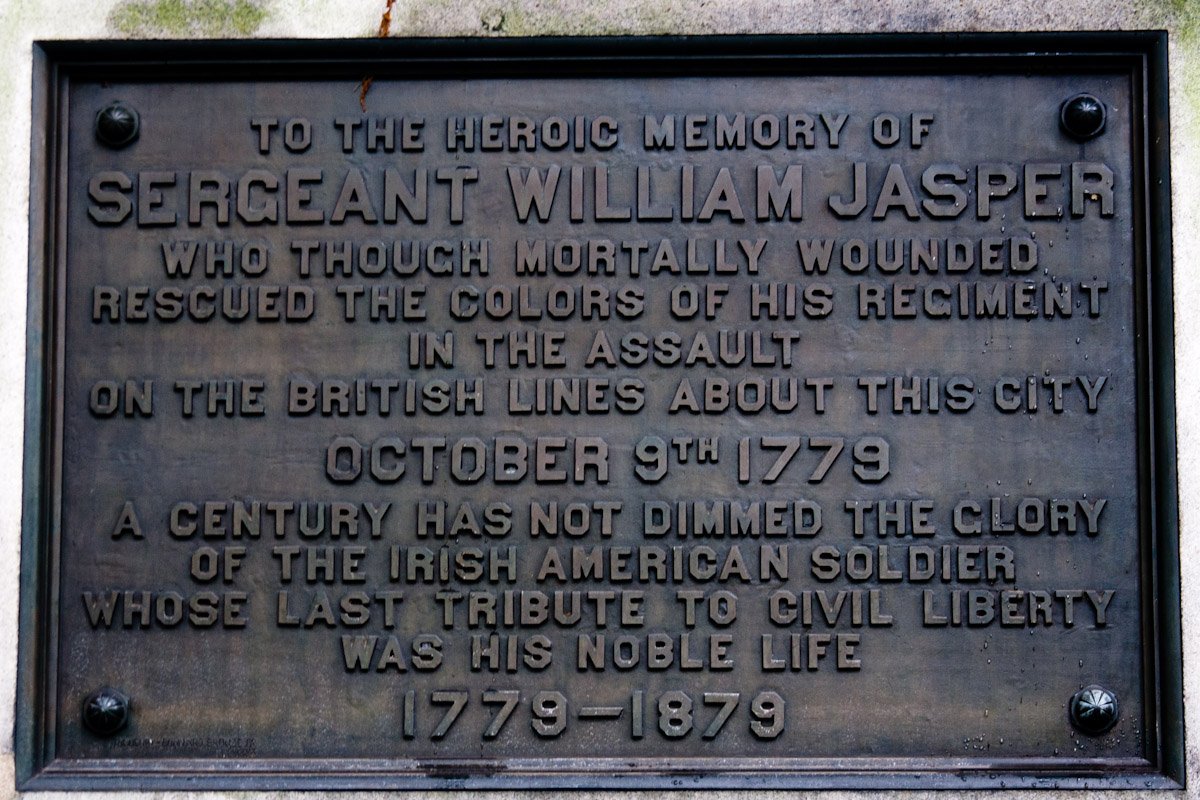 Little is known about William Jasper prior to his enrollment into the colonial military. It is believed that his date of birth is around 1750, that his family is of Irish decent, and that he grew up in the swampy country of Georgia and South Carolina. On July 7, 1775, Francis “Swamp Fox” Marion and William Moultorie recruited Jasper into the Second South Carolina Continental Regiment from the Halifax district in Georgia, an area of recruitment that strongly opposed British control. By October 1775, Jasper rose to the rank of Sergeant because of his strong leadership skills.

Charleston, which was under the control of the Continental forces of Major General Charles Lee after the Royal British Governor, Lord William Campbell, was convinced to leave and find protection under the British, was protected by a series of forts all manned by 6,500 local colonists. Jasper’s unit was stationed at Fort Sullivan, later renamed Fort Moultrie, which needed to be built and maintained by his unit. The Second South Carolina was attacked by a British Naval fleet led by Sir Peter Parker at about 11am on the morning of June 28, 1776; this is the time in which Jasper began to gain an esteemed reputation. During the bombardment, the banner of the Second South Carolina was shot off the flag staff and fell outside the walls of the fort. Seeing this, Jasper jumped across walls to retrieve it; he grabbed the flag from the broken staff and got a cannon sponge staff from Captain Peter Horry. He then put the flag on the staff and put the flag back on the summit of the fort. It is said that as he planted the flag, he shouted, “ God, save liberty and my country forever!” After his act of bravery, he continued to fight until the British fleet left in the night.

Jasper's act of bravery led his commander to start a series of small guerrilla raids on the British along the Georgia coast from 1776 to 1779. Jasper used stealth and deception as well as hand-chosen men to capture enemy patrols and pickets, those who were stationed ahead of the enemy troops. Jasper would dress as a civilian to go into towns and gather intelligence on enemy troop movements and placements, and would take prisoners when possible. The summer of 1779 was when his most famous raid occurred. Jasper was supposedly off to visit his brother who was across enemy lines, along with Sergeant John Newton. They saw a group of war prisoners being sent to Savannah for execution, and the two men rescued the group while the guards stopped to fill their canteens at a spring. They returned with the freed prisoners, and once more Jasper was deemed a hero for his actions.

In 1778, Britain’s army began a campaign to control the South. By the end of December 1778, Savannah was controlled by the British. This was important because it meant that Britain controlled both the center of commerce and the coast of Georgia. The southern commander of the Patriot Army, Major General Benjamin Lincoln, knew that he needed to retake Savannah. In September of 1779, Savannah was surrounded by Lincoln and French Admiral Valerie D’Estaing. On October 9 1779, 1000 American troops and 3500 French troops launched a frontal assault on the British, but they faced many difficulties. One unit entered the battle late because they had trouble getting through the marsh. Other units had difficulty because of underbrush and logs that had been put in areas to make it difficult for the attackers to get close. Jasper’s unit was initially successful, but eventually could not handle the assault. The British troops, commanded by John Maitland, moved to drive the Patriots and French back, resulting in close combat fighting; this had the French and Patriots losing control of the battle. In the Second South Carolina, lieutenant Bush carried one of the regiment's flags into that battle, supported by Jasper. When Bush became injured, he gave Jasper the flag. Sergeant Jasper ran to place the flag on the enemy’s battlements to bolster morale, but became mortally wounded as he reached the top. Bush recovered the flag and tried to recreate Jasper’s heroism, but also became mortally wounded and fell with the blood soaked flag under him.

The Second South Carolina recovered Sergeant Jasper’s body from the battlefield, but he eventually succumbed to his wounds. When his name was listed as one of those who had died, it was written as “The Brave Sgt. Jasper”; this showed how high he was thought of by his contemporaries. It is believed that Jasper’s body lies in an unmarked grave somewhere near where the battle took place.

His grave was forgotten, but he was not. Jasper, believed to be of Irish decent, became an inspiration to Irish immigrants in Savannah before the Civil War. These men formed the Irish Jasper Greens Militia in 1842 and fought in the Mexican-American War in 1846. The militia also fought in the Civil War. After the Civil War, the statue to commemorate Jasper was erected in 1888, and was created by Alexander Doyle. The Savannah St. Patrick’s Day Parade Committee has a Sgt. William Jasper Memorial Ceremony every year the day before the St. Patrick’s Day Parade. They march from Johnson Square up to Bull street then to Madison square where his Monument is located. They hold this ceremony to remind all in attendance that “the efforts of common men shape our history.”