Phi Delta Theta Fraternity House is a historic chapter house near the campus of the University of Illinois at Urbana-Champaign. It was built in 1922 in the English Revival style by the noted Chicago architect Howard Van Doren Shaw. The house represents the flourishing of the Greek Letter movement at the University of Illinois in the 1920s. Members of the Eta Chapter resident in the home in the early twentieth century were known on campus for their athletic and academic prowess. 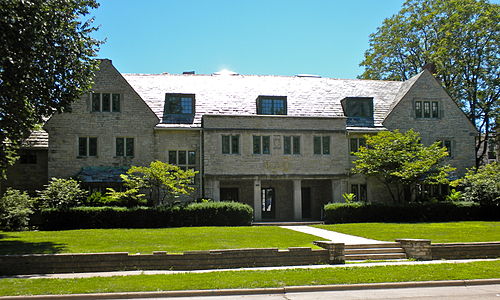 The architecture of chapter houses was seen as a way of educating students by exposing them to classical design. On the Urbana-Champaign campus, the majority of chapter houses were built by local architects in revival styles (e.g. Classical Revival, Gothic Revival, etc.) The Phi Delta Theta house was built in 1922 in the English Revival style, which imitates English domestic architecture of the sixteenth century. This style was extremely popular in America in the first decades of the twentieth century; there are five other chapter houses on campus built in this style.  Notable features include the steeply pitched roof, grouped casement windows, limestone exterior, and tall chimneys.

The design of the house was planned by Howard Van Doren Shaw, a noted Chicago architect. Shaw designed houses in the Hyde Park neighborhood of Chicago, but is best known for his work on country houses including his own home, Ragdale, in Lake Forest, IL. The house was constructed by English Brothers, a well-known local construction company also responsible for Memorial Stadium (1924) and University Library (1926). It was featured in The Architectural Forum in 1922, which called it a "fraternity house of outstanding architectural importance."

The Phi Delta Theta Fraternity at Urbana-Champaign
Phi Delta Theta was founded in 1848 at Miami University of Ohio. The Eta Chapter was established in 1893 following the repeal of anti-fraternity regulations; it was the third fraternity to appear on campus. In the early twentieth century, the chapter was known for its academic and athletic achievements.