This is the site of the Zachariah Walker lynching. Zachariah had shot a man in self defense, and after fearing capture he attempted to commit suicide. While in the hospital recovering a mob, rallied by the sheriff, pulled him from his bed; lynched him from a tree; and burned him alive. "For God's sake, give a man a chance! I killed Rice in self-defense. Don't give me no crooked death because I'm not white!" - Zachariah Walker 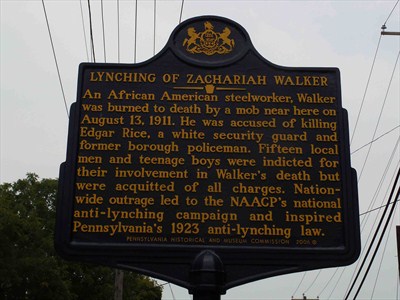 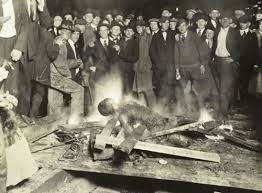 Zachariah Walker was a steel industry laborer who had recently moved to Coatesville, Pennsylvania to begin work with the Worth Brothers Steel Company. On Saturdays the day laborers, including Walker, would often spend their time drinking in downtown Coatesville. On his way back from the festivities of downtown , a likely inebriated Walker  fired rounds in the general direction of two polish steel workers. While he missed both of the polish men, the sounds alerted a security guard working for the Worth Brothers Steel Company who then came to find out what the commotion was about.While attempting to apprehend Walker, both men drew their weapons. Rice was shot and killed before he had a chance to fire at Walker. After this incident Walker, in a drunken stupor, stumbled in the general direction of is lodging, but ended up sleeping in a barn until the next day.

After Rice’s body was discovered, the two Polish steel workers identified Walker as the prime suspect.The police and some local workers started a search party to look for him. Hearing word of the search party a startled Walker hid in a tree. He decided that he had no chance at surviving after the events of the past night, and tried to commit suicide by shooting himself in the head. This would however prove futile as he only managed to break his jaw. While he wasn’t killed by this, it was enough to knock him out. He was found on the ground by the tree by members of the search party and taken to a local hospital.

While at the hospital the town sheriff Charles Umsted came to visit the constrained Walker. The sheriff was up for reelection and saw this as an opportune moment to gain some sway with the townsfolk. After falsifying the events of the crime including a false confession he made the statement “"I would be the devil if somebody should happen to go after that fellow -- Gentleman, allow me to say that I am not going to get hurt.". This speech was him basically giving permission to the people of the town to enter the hospital and lynch Walker so he could obtain some more votes. The already roused mob was moved by his words and proceeded to enter the hospital and drag the strait jacket confined Walker into a nearby field. While the mob prepared the bonfire, Walker watched in horror and gave the above quote of: "For God's sake, give a man a chance! I killed Rice in self-defense. Don't give me no crooked death because I'm not white!"

This is the terrifyingly true description of the scene: “Walker was hurled onto the pyre, his body quickly enveloped in flames. The crowd roared its approval, and those close to the fire hunched forward, according to a newspaper report, "eagerly watching the look of mingled horror and terror that distorted his blood-smeared face." As the flames scorched his skin, Walker let out a series of awful screams that were heard, according to later testimony, almost a mile away. He seemed close to death when he managed, somehow, to crawl out of the fire. Still breathing, he reached the fence, his back -- as one boy later testified -- "all raw with burns. The onlookers paused in shock for a moment; no one had anticipated this. Then several of them beat him or pushed him with fence rails back into the flames. Shrieking with pain, Walker managed to struggle out a second time, still shackled to the burning footboard. According to witnesses, when he was pushed back in again, his flesh was visibly hanging from his body. To the crowd's amazement, Walker struggled out of the fire a third time. This time they allowed him to crawl almost to their feet, astonished and horrified by what one reporter called "the revolting spectacle his maimed and half-burned body presented to them." Finally, several men swung a rope around his neck, holding it taut at both ends, and pulled him back into the coals. His resistance gone, Zachariah Walker gave one last terrible scream and collapsed. His body was soon obscured by a wall of fire, and the smoke carried the smell of roasting human flesh into the night sky”.