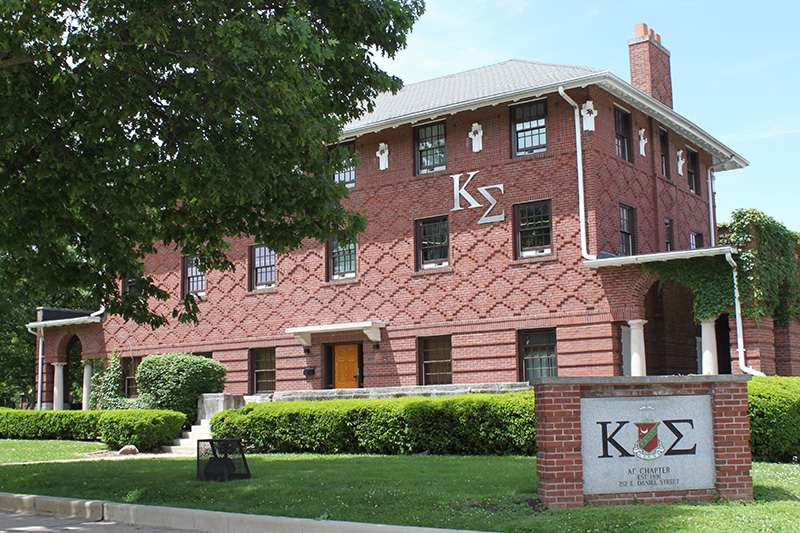 The Chapter House:
The construction of chapter houses at the Urbana Champaign campus was driven by housing shortages resulting from the antipathy of the German system towards providing room and board to students. The Kappa Sigma house was part of an initial wave of building from 1906 to 1917 which would be followed by a second, larger wave in the 1920s.

The architecture of chapter houses was seen as a way of educating students by exposing them to classical design. On the Urbana-Champaign campus, the majority of chapter houses were built by local architects in revival styles (e.g. Classical Revival, Gothic Revival, etc.)
The Kappa Sigma house was built in the Italianate Renaissance Revival style, which is meant to evoke an Italian palazzo. Notable features include a loggia (i.e. a covered exterior gallery)in the two side facades and diamond-patterned brickwork on the upper two stories.

The house was designed by local architect Archie H. Hubbard, an alumnus of the fraternity. It was constructed by local contractor A.W. Stoolman, who built many structures on the campus of the University of Illinois as well as two other chapter houses: Beta Theta Pi and Sigma Alpha Epsilon.

The Kappa Sigma Fraternity at Urbana-Champaign
Kappa Sigma was founded at the University of Virgina in 1869. The Alpha Gamma Chapter of the University of Illinois was established in 1891, and was the first fraternity to be established following the end of anti-fraternity restrictions. The fraternity was initially supervised by Robert Lackey, an alumnus of the Purdue chapter and the first football coach at the university.