This historical marker was dedicated in 1999 to recognize that tragic event that is still referred to as the “Georgia Massacre.” The brutality of this execution-style murder of Dorothy Malcolm, Roger Malcolm, George Dorsey, and May Dorsey in 1946 inspired President Truman to acknowledge the urgent messages of civil rights activists in the post-World War II era and take some of the first steps to use the resources and power of the federal government to confront racial violence and inequality. The brutal murder of three men and one woman occurred 2.4 miles east of this marker. 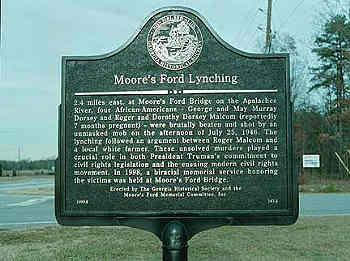 On July 25, 1946, a mob of twenty white men pulled three unarmed men and one pregnant woman out of the car on an isolated road, lined them up, and murdered them. According to several accounts, the faces of the victims were unrecognizable owing to the number of bullets shot into their bodies.

On the day of the massacre Roger Malcolm, one of the men murdered, had been bailed out by Loy Harrison. Loy Harrison was a farm owner, who was reportedly a member of the Ku Klux Klan and a known bootlegger. After bailing Roger out of prison, he was going to take the two couples, the two women sisters and George Dorsey a World War II veteran, back to his farm to work as sharecroppers.

On the drive back they were stopped on a lonely road. Loy Harrison describes the initial encounter. “A big man who was dressed mighty proud in a double-breasted brown suit was giving the orders. He pointed to Roger and said, ‘We want that Nigger.’ Then he pointed to George Dorsey, my Nigger, and said, ‘We want you, too, Charlie.’ I said, ‘His name ain’t Charlie, he’s George.’ Someone said ‘Keep your damned big mouth shut. This ain’t your party.” As they were pulling the two men out of the car one of the women was able to identify an assailant and called his name out. The identification led them to pull the women out of the car and place them near their husbands. Harrison stood silent as the mob fired an estimated sixty bullets into the living bodies of these four human beings.

To understand the massacre, one must consider the historical context. This murder occurred shortly after Eugene Talmadge, the man hoping to “save Georgia for the white man” was put into office. This primary election race for governor was very contested as many of the previous barriers such as voter age, poll tax, and white primary exclusivity had been struck down by the Supreme Court. Black registered voters increased from 20,000 to an estimated 135,000. While each candidate in this election supported discrimination and segregation in all of its vehicles, Talmadge “broke from the pack with an aggressively racist campaign, pledging to restore an all-white democratic primary and welcoming the endorsement of the Ku Klux Klan. Harkening back to the Reconstruction era, Talmadge warned that if blacks voted in primary elections, “our Jim Crow laws are gone, and our pretty while children will be going to school with Negroes.”

This massacre drew nationwide attention including an investigation by the F.B.I. However, this investigation was met with silence from the residents of the town. Without anyone willing to provide information, the grand jury was unable to identify any suspects. According to an article by a local historian, the murders were "the inevitable results of Talmadge’s and the Ku Klux Klan’s advocacy of violation of the laws of the federal government and human decency."